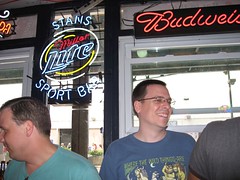 After my first four days of leadership training wrapped up in Richmond, VA last Friday afternoon, I sped up Rt 95 at 80 mph, exchanged my duffel bag for my backpack, and caught an Amtrak train to New York City for the holiday weekend.

Friday night was spent with the bachelor (my friend Chris), his brother, Kai, and another long time friend. We started at a nearby midtown bar, and ended at a typical gentleman's club. The impromptu events of the night wrapped up at 3 am, serving as a good appetizer for Saturday's main events.

After too little sleep, we awoke and met up with the full group of guys (~10) at Stan's Sport Bar across the street from Yankee Stadium. We did our best to finish a keg of Miller Light before heading up to our seats high above the third base line. As it turned out, we were in a “no alcohol” seating section (no sales, no drinking), and it didn't take us long to find out the rule is enforced. A few guys spent almost the whole game drinking in the stadium hallway as a result. I took turns shuttling back and forth due to the heat, and need for food. Despite the Yankees 3-1 loss, a fun time was had by all, and I found out how great my camera's 16x digital zoom works. 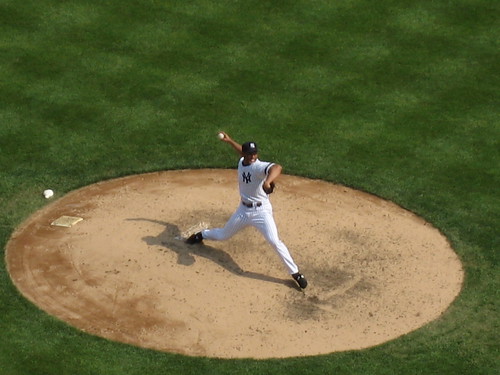 After a quick nap and showers, we grabbed a drink at Chris' hotel, and taxied our way over to one of the classiest strip club's in NYC, the Penthouse Executive Club, for dinner at Robert's Steakhouse (before you laugh, check out the menu). We were the first table of the evening to be seated, and quickly found the service to be stellar. Twenty minutes later, the entertainers started to slowly join us to enhance the dining experience. The bachelor was well taken care of (as was your author). And before you think this is a guy thing, there were five attractive young women at the table next to us for a bachelorette party.

Along with my Grey Goose and tonic, I enjoyed an appetizer of Kobe Style Beef Carpaccio with Arugala Salad, Truffle Oil and Shaved Parmesan, followed by a main course of Grilled Venison Tenderloin with Double Smoked Bacon. The food was among the best I've had the privelage to enjoy. The carpaccio was luxuriously tender like sushi, and the venison was cooked a perfect medium rare, seasoned underneath by a medieval slab of salty bacon. We bought the bachelor a Gold Label Kobe New York Strip, and he was kind enough to share with those interested in a taste of the $105 steak (yum). 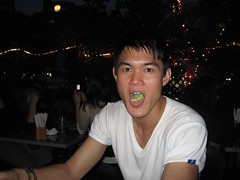 We enjoyed an hours worth of entertainment on the lower level after dinner, followed by the German beer garden Zum Schneider in the East Village, and two more gentleman's clubs. By last call at 4:30 am, about the only thing I could afford was the slice of NY pizza I devoured.

Our Sunday brunch was at Bobby Flay's Bar Americain. It was another enjoyable meal, and since I have pictures, I will share a short review of it tomorrow. Down to just Chris, my friend Kai and I, we watched a few movies and surfed the internet on my brother's new 40″ plasma TV, finally grabbing an inexpensive Asian meal in the Village before Chris left town.

I need more friends to get married ASAP!

View more (G-rated) pictures from the weekend on Flickr.