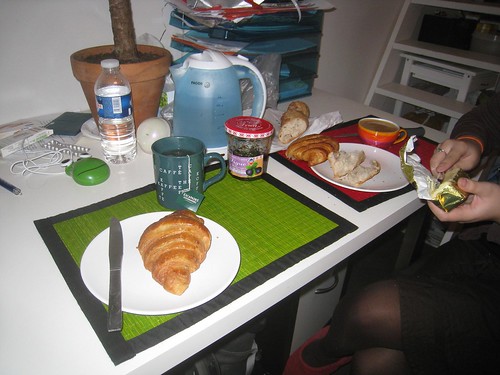 My first and second visits to Paris were during the summer of 1998.  I saw a lot back then, and was excited to revisit familiar places and new sights now.  The first morning began with fresh croissants, a baguette, and coffee.  Unfortunately, the weather was not on our side.  A steady, cold rain was falling as we stepped out. 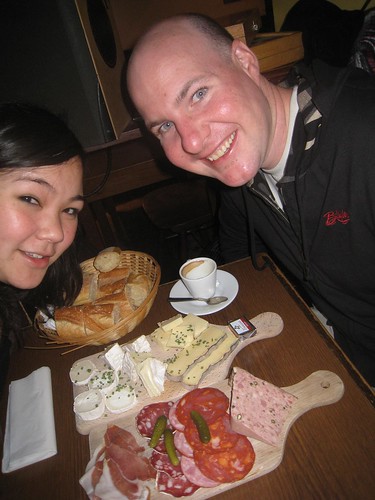 The first stop on my list was Jim Morrison's grave, but we found the cemetery was closed due to icy conditions.  Laura's suggestion, Montmartre, came next though we decided to stop in a restaurant she knew, Le Rendez-Vous Des Amis, in the area before visiting the church.  Tourists were out in force, but she steered us down a side street away from the crowds.  We ordered coffees to warm up, and plates of cheeses and meats. 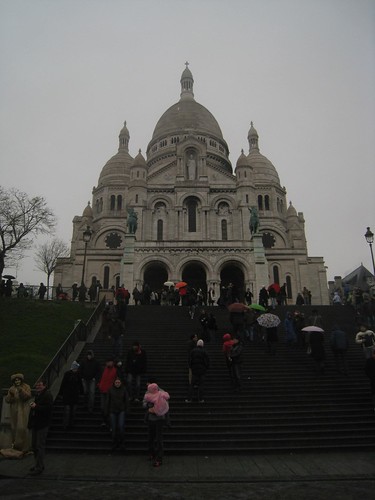 Satiated after stuffing myself with cheese and bread, we braved the cold again.  We left the restaurant to find the rain had begun to mix with snow flurries.  I was ecstatic to be standing in snow after more than a year without it.  On a clear day, the view of Paris from Montmartre is suppose to be brilliant, as it sits atop a hill.  Instead, I saw vague outlines of landmark sites.  Inside the church, live music was being played, and a steady stream of tourists were walking around the aisles.  The holidays turned out to be a good time for European church visits as they are all decorated with nativity scenes. 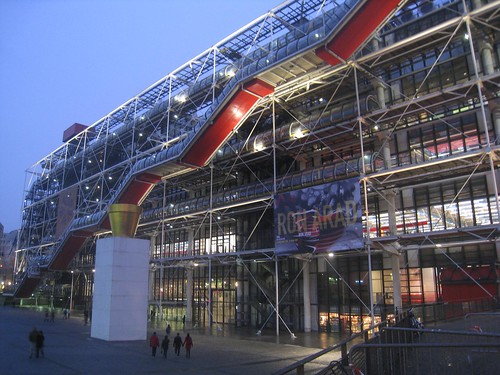 No visit to Paris would be complete without a glance of the Arc de Triumph, Champs de ‘Elysees, and Eiffel Tower, so they were next on my list.  Memories of my photos from long ago, under sunny skies in warm weather, were constantly flashing in my mind as we walked down the street.  Laura suggested we return in the evening when the lights would be visible.  The Eiffel Tower was closed due to frost.  We walked by the Hotel de Ville which featured a busy ice skating rink.  The fun fountain at the Pompidou was frozen over, icicles hanging off the colorful sculptures.  The museum was already closed by sundown, so I joined Laura for a drink with her friend at a nearby restaurant. 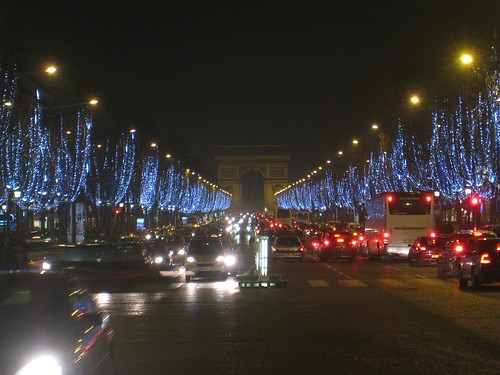 One of the first things her friend said to me, in a joking yet truthful way, was that the French don't like to speak English.  This was no surprise, as I learned it in Laos.  In reality, it is less the ability to speak conversational English than the self-consciousness about speaking proper English that results in such a declaration, as English has been taught in French schools for quite awhile.  I found this visit a bit more awkward than the prior night's party, however I did pick on a Moroccan engineering student who was separated from his friends.  Otherwise I tried to be patient so Laura could enjoy her visit.  If it had been warmer, I'd have spent the time wandering around the nearby streets.

Before returning to Laura's place, we stopped back at the Champs de ‘Elysees to see the lights.  It was worth the return visit, as the gray sky didn't matter after sundown.  All the trees had blue Christmas lights, and vertically hanging fluorescent lights which had blue lights drip from top to bottom every few seconds.  It created a nice effect along the famous street. 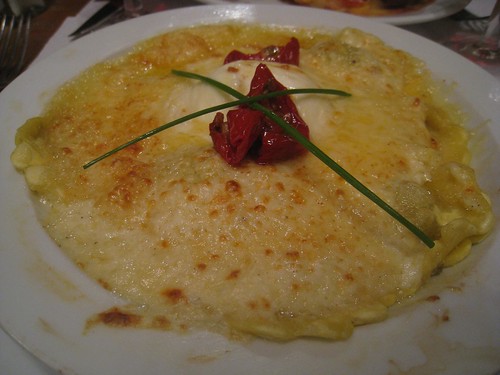 The night continued at an Egyptian restaurant, where I had a chance to smoke as well, sheesha.  The Moroccan guy met up with us there, and also joined us for dinner at a nearby French restaurant.  I ordered eggplant ravioli smothered in two types of cheese, while the other two dined on cheeseburgers.  We shared a jug of wine, which is slightly less (in terms of volume and price) than a typical bottle.  I was anxious to try a dessert, and chose the chocolate cake which was particularly good, and certainly not worth the $9 price tag.  Restaurants in France are prohibitively expensive, and after almost a year of eating in restaurants around the world, I was having trouble adapting to this reality.  The weakness of the US Dollar makes it feel like New York City prices, plus a 40% surcharge! 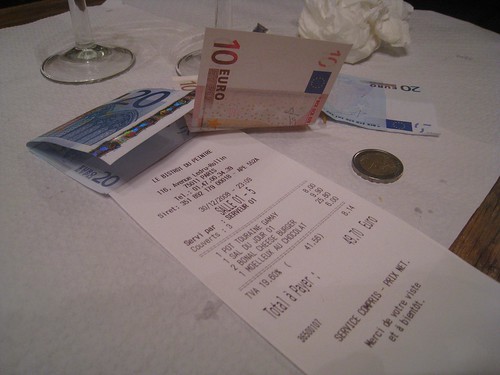 During the day, a few small grey dots which had appeared in the middle of my camera's display window began to spread like an Etch-a-Sketch, first extending horizontally across the 3-inch screen width, and then a though the camera was developing a case of macular degeneration, the middle circle became bigger and bigger.

That food looks delicious! Can't wait for scrumptious croissant when we arrive there!

Yummo with the meats and cheeses!!! :lol:

I very much enjoyed reading about the meals you had! That plate of meats and cheeses looks tasty!

Yummo with the meats and cheeses!!! :lol:

I very much enjoyed reading about the meals you had! That plate of meats and cheeses looks tasty!