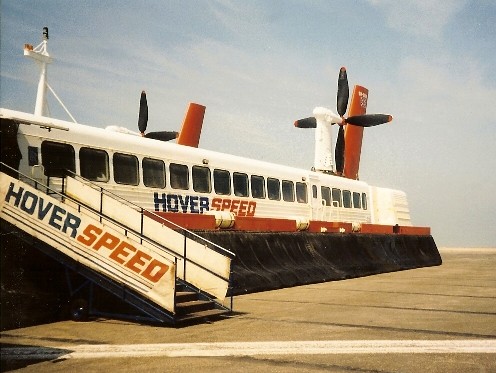 I woke up and showered. I'm relegated to my long sleeve shirt until I do laundry (at a hostel in London, hopefully). I'm on the TGV to Calais, and should be there in less than two hours. I'm looking forward to the hovercraft ride. I'll just put on my headphones and rock out to the breeze, and sight of the white Cliffs of Dover. I hope I can stay at the hostel there (Dover) for a night. Otherwise, I'll have to bum rush London! Though the rest of my trip might be more expensive, everyone will speak English, so I won't have to worry about weak attempts at foreign communication. I plan on buying one souvenir, and that will be in Ireland.

When I got to the shuttle pick-up for the Hover port, no one was there, everyone was apparently taking the ferries (slower and cheaper). I like the fact that the departure information calls the trip a “flight.” From the noise, I can tell I just missed the docking/entrance of the hovercraft. I heard the loud noise, but it took me a minute to realize it might be cool to watch this thing come out of the sea and onto land. I boarded, and we were off. My hopes of seeing the white cliffs were blurred by the salty (grimy) sea water that soiled the windows. Anyway, take off was cool, with the inflation and all. The trip was really smooth, and we were cruising at 50 miles per hour. 35 minutes later, we had docked in Dover. Right away, I saw the castle and cliffs.

I got to the hostel and dropped my things off. I went to Dover castle for the afternoon. The weather was nice and cool, the views were great. There was even a beach, which made me think of Eric (he always wanted to go to the beach). The tour of the underground (WWII) caves and hospitals was a bit campy, with lots of laser tripped audio clips, but everyone seemed to realize this and enjoy it. So far, the English seem to be very friendly. And, they bear more resemblance to Americans (or the other way around) than any other European country I've been to. This must be due to their diet of meat and mayonnaise. You only get one chance to make a first impression, and Dover has made me really excited for the end third of my trip. Oh yeah, I finished “On the Road” and it had kind of a sad ending.

I hopped on a 9 AM train to London since my dorm mates had managed to wake me up early. The trip was kind of short. As we entered London, some kids threw two rocks at the train. One of them flew through an open window, and the other hit a window, shattering it. Nobody was hurt, and everybody seemed to take it in stride. Before we got off the train, one lady released her frustration orally for a bit. I got on the Underground quickly, and was off to my reserved hostel room. The entrance was just like the description in “Let's Go,” yet I'm kind of pissed off that I haven't been staying in hostels where you can buy beer and/or there is a more sociable common room. Anyway, I took a shit in the bathroom, and the toilet was clogged/broken. Then I left.

I went to Leicester Square, where I bought a half priced ticket for Buddy (Holly) at $22. Then, I noticed there was a matinee showing of “Rent” today. I dashed over to the theater and got a ticket right before it started ($12). When the characters began to come on, I immediately began to like the show. The music was loud; it was raw, long, and great. Plus, it was sad, and the end offered hope! I like Piccadilly Circus and Leicester Square. This city is great! It reminds me of New York City, except there are no skyscrapers. Plus, the cops don't even carry guns, so it is safe to assume the criminals don't have them either. I feel quite safe here. Maybe it is because no matter how lost I get, I still speak the language. I bought two books, “Naked Lunch” by Burroughs and a collection of Edgar Allen Poe's stories.

My seat for “Buddy” was up on the dress circle (first balcony), about five to ten rows back. The view was good, but it made me appreciate my position for “Rent” even more (stall – ground floor, 8-10 rows back, and 5 right from the center aisle). Both theaters were small. I was especially amazed at the choreography developed for the “Rent” set. “Buddy” used mostly moving platforms. It was like watching the movie and having a live cover band do the songs. Well, it was entertaining.

I hung out in Piccadilly Circus afterwards. There, I saw some guy abusing this girl – grabbing her, slapping her , running after her. Though everyone was watching (hundreds of people), the guy didn't seem to notice. He looked kind of respectable in a suit. Eventually, they crossed the road to the punk/youth side. She was yelling by now, and once dragged her fingernails down his face (in an attempt to scratch his eyes I assume). A bunch of fire tossing/eating mohawk'ed street performers held the guy up, and allowed the girl time to escape. It was kind of sad. That guy was a dick.