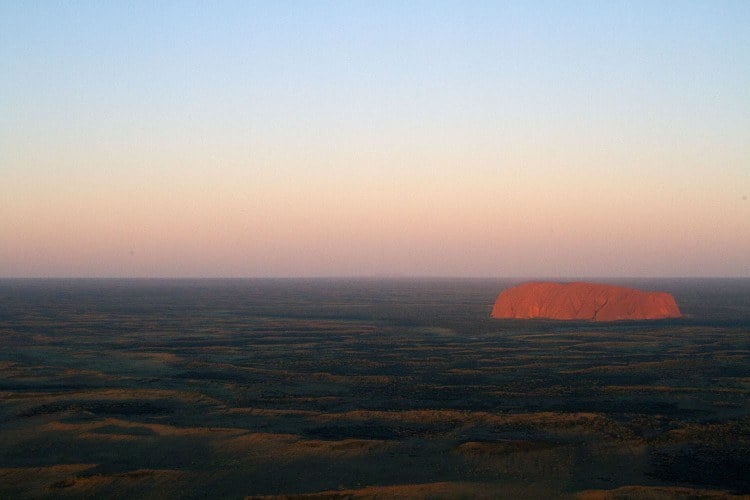 Uluru from the sky.

Ayers Rock, or Uluru as it is traditionally known, is an iconic symbol of Australia. More than 250,000 people visit the red center of the country each year.

It's effort to journey out there alone. Australia is a big country and not exactly what you'd call densely populated.

Flying to Uluru takes a good three hours from the capital cities of most Australian states. If you're travelling by car, the quickest route there is 29 hours straight driving.

It stands to reason that anyone who makes the commitment to journey out to the heart of the Australian desert would be determined to get something out of it.

Unfortunately, many tourists draw the conclusion that the best way of doing this is to climb the rock itself. 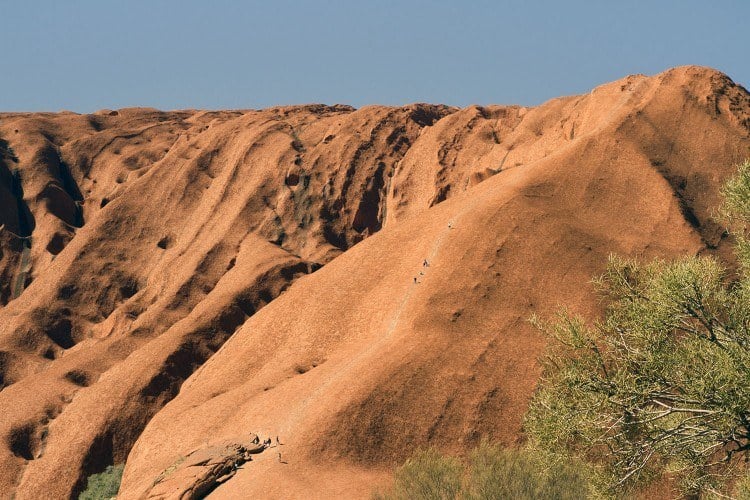 This is an act that is not only very dangerous but considered to be extremely disrespectful to the Aboriginal people who still call this part of Australia home.

It is their belief that Uluru was formed by ancestral beings during the Dreamtime (the creation of the earth). Some areas of the structure are said to represent ancestral spirits, and rituals are still held in sections of the rock today.

Uluru is considered sacred to them, which is why they would prefer that people honor this by not climbing it.

Luckily, there are other means of experiencing Uluru that are far more rewarding than scaling a small section of the monolith could ever be.

Here are some alternatives to climbing Uluru in Australia that you might want to consider. 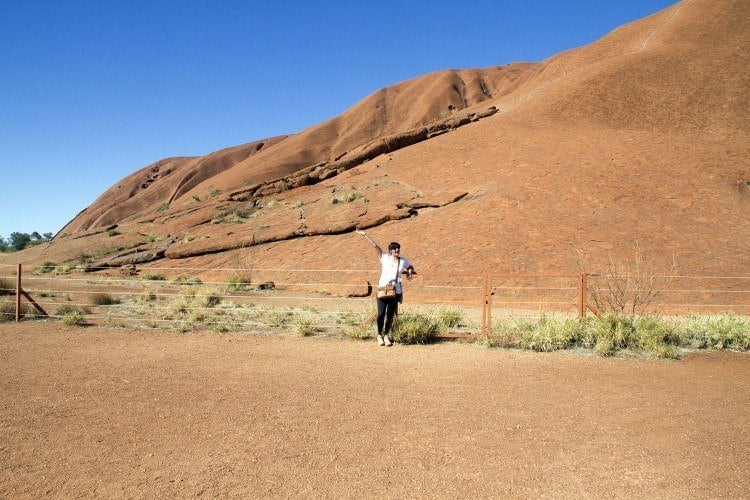 I survived the Uluru Base Walk!

Walk Around the Perimeter of the Rock

This is by far the best way to take in the full scope of Uluru.

The Uluru Base Walk is 10km (6.21 miles) long and takes around three hours to complete.

The track is marked with relevant information about the Anangu people who have resided there for thousands of years, dictating the way they lived off the land and their traditional stories.

There are even some cave paintings that have survived the test of time and foolishness of early tourists to the rock (tour guides used to throw water on them, the better to show them off to the crowds!)

Some parts of the rock are still considered to be especially important to the Aboriginal people, and they ask that you refrain from taking photos in these sections.

Don't worry – they're all clearly marked, so you'll know when you're able to start snapping away again. 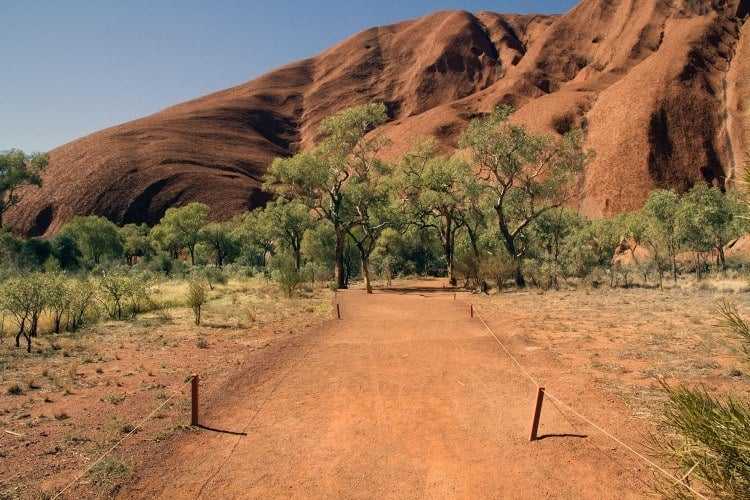 If you have any strength left in your legs after completing the walk, take the two-kilometer path out to the Uluru-Kata Tjuta Aboriginal Cultural Centre.

You'll have the opportunity here to learn a bit more about both the rock and the people who called the area home before European settlement.

After that, you can eat whatever you wish for dinner that night – you've earned it!

Bikes are available at the site, and offers a speedier option when journeying around the base of Uluru. 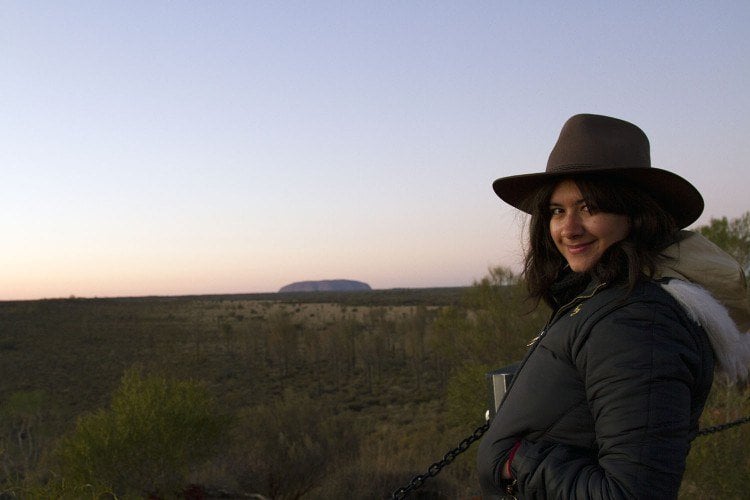 Ogle Uluru During Sunrise or Sunset

Uluru will knock your head off with its magnificence at any time of the day. That being said, it's worth making the time to see it either during sunrise or sunset.

I was lucky enough to experience seeing the rock in the light of the setting sun in 2015. Uluru glowed that deep, earthy red that it and the Australian outback is world-famous for.

It was one of the most spectacular sunsets I have ever seen.

If you're carless, there are buses available in Yulara (the village where all visitors to Kata Tjuta National Park are required to stay) for both the sunrise and sunset sessions.

These can be booked at the tourist information center in the town square or your hotel. 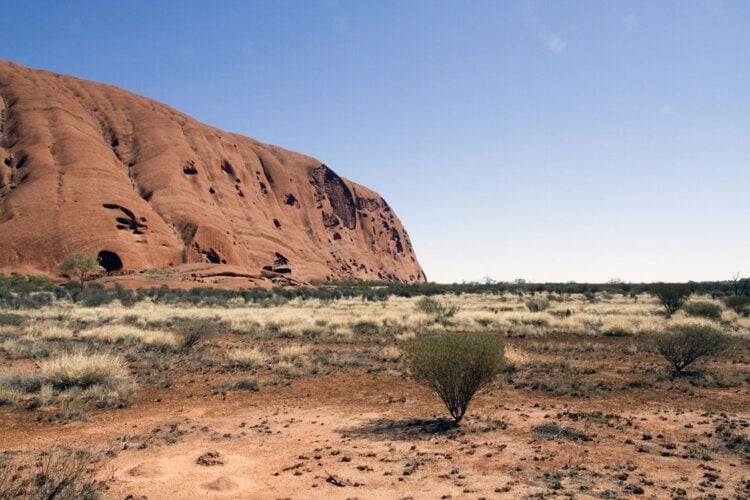 How's that for a dinner partner?

Dine in the Desert, With the Rock as Your Companion

There are two options available when taking your meal with Uluru and Kata Tjuta as your dining companions.

The Sound of Silence experience consists of a buffet meal that has quintessentially Australian bush tucker. You'll find yourself gnawing upon crocodile, kangaroo, barramundi, and quandong (an Australian desert plant).

You'll knock back champagne and watch the sunset over the rock to the soothing sound of a didgeridoo.

The night ends with dessert and a detailed explanation into the constellations of the night sky that are visible from this part of the globe.

Tali Wiru is a similar deal, with a few notable differences. The setting is much smaller – you'll find yourself dining with no more than 16 other people. Rather than a buffet, you select your dishes straight from a menu, and they may be some of the best meals you'll consume in your life.

I experienced Tali Wiru for myself last year. It was a magical evening that I'll never forget. 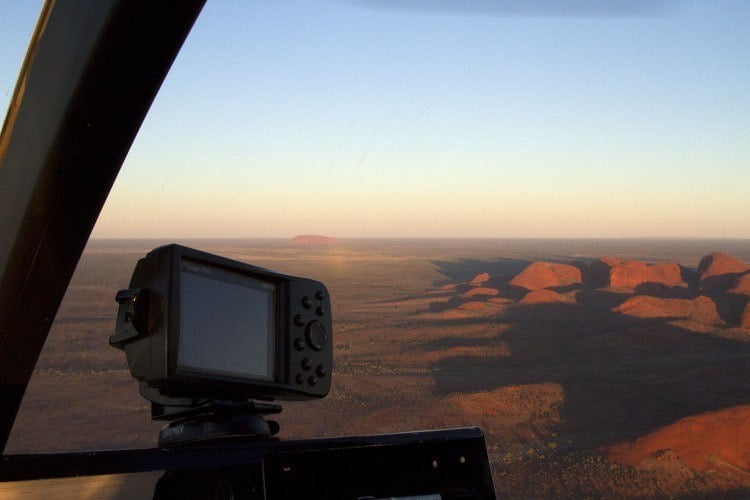 Not a bad view at all

Opt for a Bird's Eye View Instead

If you've got a bit of extra cash up your sleeve, I would highly recommend splurging on either a plane or helicopter flight

Don't sit in the front seat if you're as terrified of heights as I am. There will be a glass floor at your feet; you'll be looking straight down, and you will be utterly terrified.

Flights are available via both helicopter and plane at any time of the day. If you're going to do it, I recommend shelling out a bit more to see the rocks at either sunrise or sunset. It's worth it!

As travelers, it's important to respect the local beliefs and culture of the countries that you visit. This way, you can experience Uluru at its very best, without causing any offence to the traditional inhabitants of this part of Australia.

Heading to Australia? Click here for a complete guidebook

Excellent article! Uluru is definitely a famous place but many people may be unaware about it being disrespectful to climb the mountain. But riding a bike definitely provides a fun way to journey around the base of Uluru. And a healthy way to spend a visit to the site.

Thank you Mary! I'm hoping if more people knew the reasoning behind it, they'd be less likely to do the climb. Bikes would be fun - the walk too was both challenging and awe-inspiring!

Between February 2010 and February 2011 my wife and I bought 2 Round The World tickets and travelled on a budget for a whole year. 365 days, 90,000 miles, 42 flights, 29 buses & 11 trains. The only item on our bucket list that we were unable to tick-off was Uluru. Why? The average cost of a hostel in Alice Spring, a 5 hour bus ride away, was £25. The equivalent at the base of the rock was £250! A flight from Perth to Cairns was AU$ 260. Flying Perth to Alice Springe and Alice Springs to Cairns was AU$ 400. I appreciate the aboriginies have been exploited ever-since the white man came to Australia, so I applaud any autonomy they fight for. but the taxes they've imposed on visitors to Uluru is a rip-off and caused us to bypass one of the great natural wonders of the world.

Thanks for your comment. I am continually blown away by the expense incurred in travelling around Australia, and I am an Aussie! That being said - I get it. Australia is of course quite remote and expensive to travel around, wherever you may be going. Yulara itself is a further six hour drive from the nearest decent-sized town (Alice Springs). I know in my experience of travelling, the more far-removed the place, the bigger the cost to travel there. And Uluru is literally in the middle of nowhere. A lot of travellers I met felt that because they had paid such an exorbitant amount of money to get out there, they were entitled to climb the rock. Each to their own, but I just personally couldn't agree with that view. Respect aside, it's also a pretty dangerous thing to do. As outlined, there were so many other ways to marvel at this natural monolith, the best of which (simply walking around it) wouldn't cost you an extra cent. I'm sorry you didn't get to see it. Still - what a trip! I'm glad you managed to tick off every other item on your bucket-list.