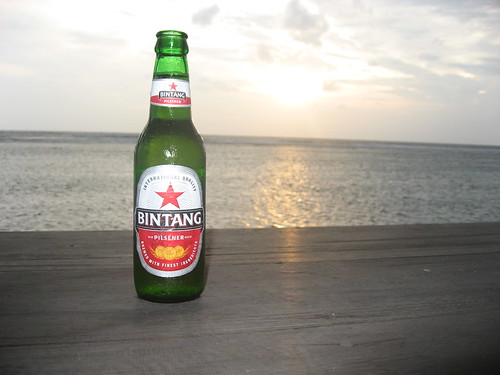 I chose to spend 3 weeks in Bali and Lombok to allow myself a chance to unwind after the fast-paced itineraries of New Zealand and Australia. While I was accomplishing my goal in Kuta, it included the constant hassle from street vendors and women offering massages, and noise of motorbikes and honking taxis. Basically, it was a big city, not a serene scene with stunning views and pretty beaches. Gili Trawangan turned out to be a needed counterbalance, made all the better by the relationships I formed with Linus, Jessica, Laura, Tim, and Ashlyn.

As most nights on Gili T were to involve drinking alcohol, the mornings consisted of sleeping in, ordering breakfast (included in room price), and consuming breakfast on the porch outside the bungalow. It felt like a lot of work, trust me! 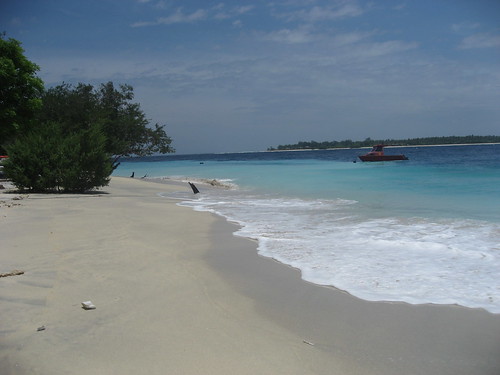 After a few cloudy days, the sun broke out and Linus and I eventually got ourselves in gear and went for a walk. We bumped into Jessica, who had been sunbathing on the beach with Laura, and joined them for a bit. The heat was sweltering in mid-afternoon, though the sun sets on the opposite side of the island meaning the mornings are more intense.

Laura started to flip through my digital photos, recognizing the irony of being immersed in views of Tahiti and Moorea from the beautiful beach of Gili Trawangan. We were all damn lucky to be where we were, and we knew it. After a bit of sun, we had lunch and rented bikes for another trip around the island, this time in the opposite direction. 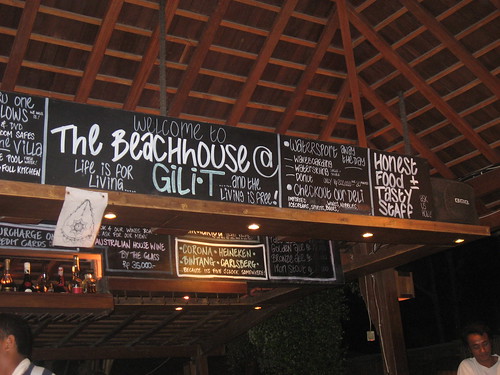 Around 6:15pm, we arrived at what could be the best bar in the world. It faces west, and on a clear day, you can supposedly see the sun set over Bali. We were lucky to see the sun at all. After our drinks at the bar, we washed up and met up for dinner at…you guessed it…The Beach House. This time, we had dinner at a table right next to the water, which was lit up, creating a romantic backdrop.

After dinner, we stayed up late in one of those raised huts – drinking, talking, laughing. It was one of those days you wish would never end.

Howdy right now there, I can?t entry the site properly inside of Opera, I actually hope you are going to repair this!

Hey Dave, I noticed that you've posted all of these entries from Singapore... Did they have any internet access in Gili Trawangan?

The Gili T internet access was slooow. I was more productive in Singapore because I had free access to a good broadband connection/computer.

Hey Dave, I noticed that you've posted all of these entries from Singapore... Did they have any internet access in Gili Trawangan?

The Gili T internet access was slooow. I was more productive in Singapore because I had free access to a good broadband connection/computer.

That happens sometimes so I don't think it's indicative of a drop off in readers.

It looks like the trip is going great ! Your beach pictures look like postcards. Thanks for the honest run down of the Kuta area. I am currently making a list of "places to avoid when I get to Bali" and thanks to you and Gary's blogs , I think I'm staying away from Kuta. I was just in Jamaica and have never been in a more aggressive " buy something now" environment. I've been to Mexico and Costa Rica and haven't had issues at either place with the aggressiveness. If the Kuta area is anything like where I was in Jamaica, I've got to stay away. It looks like I'll have to hit the Gili Islands. Thanks again for sharing your adventures.

While it can be a bit annoying, I wouldn't suggest avoiding Kuta altogether. It is a big part of the Bali experience, and a place I learned to appreciate over my 2 weeks there. Still, make the time to visit Gili Trawangan for a truly picturesque tropical island. :)