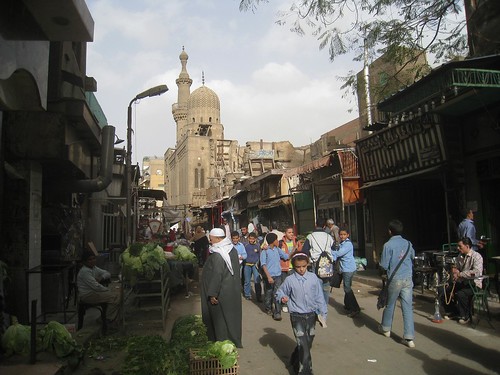 After I had enough money for the initial deposit, I called Adventure Center back. I spoke to the same woman as before, Maz.

Since my trip is one of the least expensive, the $300 deposit was more than 3/4 of the total cost.

I planned on paying the remaining $90 in another few weeks.

I printed out copies of the forms from the web site, and faxed them off. I also asked Maz to find the best airfare possible for my trip.

While the advertisement for the trip states you're flying in and out of Cairo, the truth is that is only if you take the 16 day trip.

In my case, with the 10 day trip, I will be ending in Luxor and therefore need to find a way back to Cairo.

Maz estimated the airfare from Luxor to Cairo to be $125.

The next communication I received from Maz included confirmation of my trip booking, and reservations for a round-trip flight, including the Luxor-Cairo trip and all applicable taxes. The total cost came to $1075.

I saw that as a great price, however I wanted to dig around on my own as I had yet to purchase an airline ticket online.

After checking out big sites like Expedia and Cheap Tickets I realized I wasn't going to beat Maz's price unless I found a budget-minded site. I searched Yahoo for consolidator sites and came across Airlineconsolidator.net.

I entered my trip dates, and came up with some great results. The cheapest airfare was offered by TWA.

Next, I called the consolidator and asked for the details of the flight (times, cost including taxes, layovers).

A day later I received a phone call that the flight I was interested in wasn't available, however there was another one with space but at a higher cost (about $200 higher).

Since I still had to buy a separate ticket for the Luxor to Cairo leg, I knew it wouldn't be worthwhile to take that ticket.

Also, like the flights Maz found, this one had layovers in European airports. That was something I wanted to avoid, if at all possible.