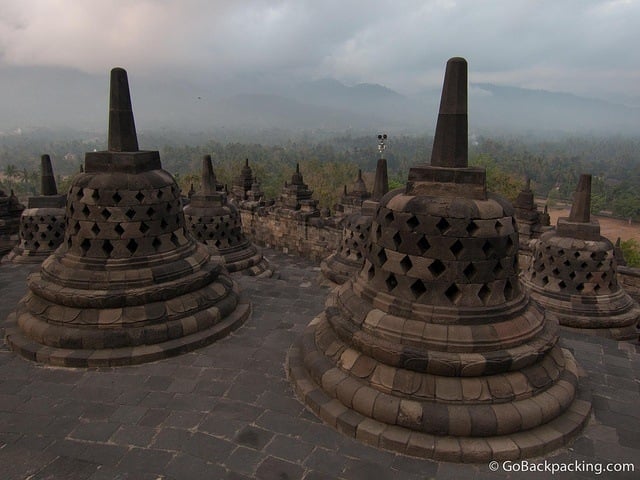 Dawn atop Borobudur Temple. 72 Buddha statues are ensconced in the stupas around the top level.

Approaching the stone steps of Borobudur Temple in the pre-dawn hours, the sky slowly began to lighten, revealing a blanket of grey clouds.

Getting up at 4 AM was no longer about seeing a multi-colored sky, but experiencing one of Indonesia's most celebrated cultural landmarks with as few people as possible.

Borobudur Temple is the world's largest Buddhist monument, its construction dating back to the 8th and 9th centuries (300 years before Cambodia's Angkor Wat).

The stone structure, built atop a hill, measures 123 square meters and features more than 2,600 carved reliefs and 500 Buddha statues.

The monument is dedicated to Buddha, while the reliefs depict his life and teachings.

The precision required to construct such a perfectly symmetrical building, 1,000 years before modern construction equipment was developed, boggles the mind.

In 1991, it was listed as a UNESCO World Heritage Site and has since become one of Indonesia's top tourist attractions, thanks in part to its easy access from the nearby city of Yogyakarta in Central Java. 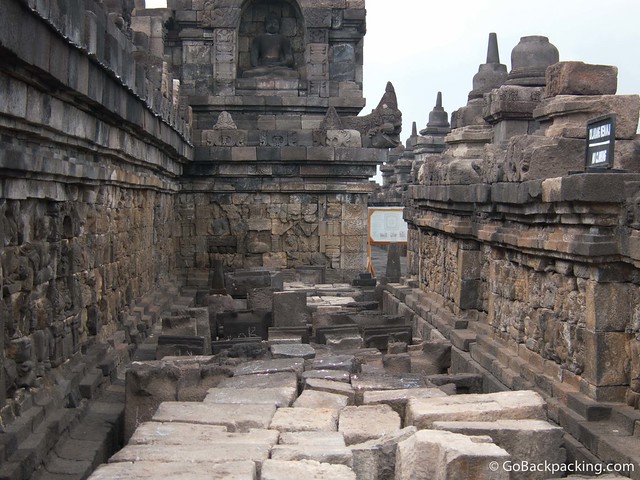 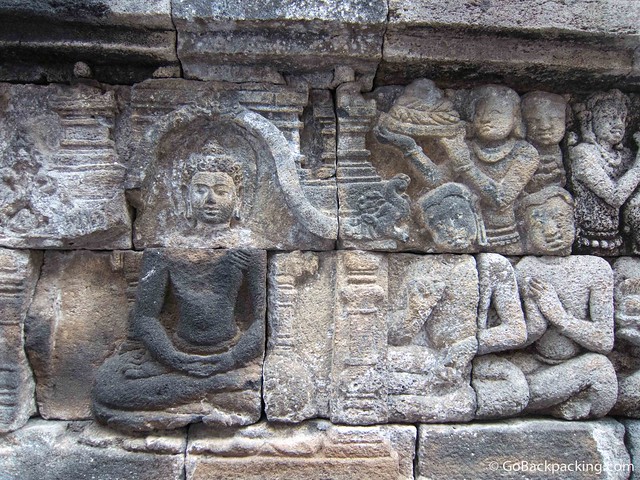 Freezes etched in stone surround the temple's many levels

Entrance to the Borobudur monument before sunrise is gained through the nearby Manohara hotel.

A sarong is required for men and women, and available for free to visitors (as well as a flashlight).

The climb to the top of the monument is steep, but short, and can be done in as little as five minutes.

Upon reaching the top-level, visitors are offered a 360-degree view of the lush landscape covering the surrounding Kedu Valley.

In the mornings, light fog drifts through the valley, adding to the mystical nature of the sacred location, which remains first and foremost, a site of Buddhist pilgrimage. 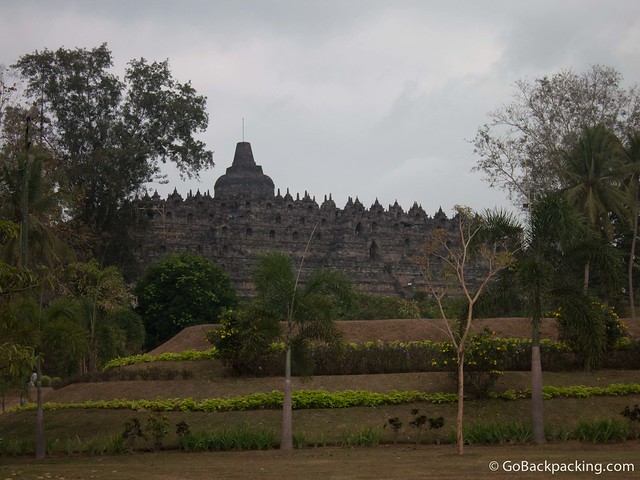 A guided tour will help you get the most out of a visit to Borobudur Temple.

There's too much symbolism and Buddhist iconography for a layperson to decode on his or her own.

It wasn't until I began preparing for this trip to Indonesia that I became aware of Borobudur.

Given my long-standing fascination with Buddhist culture, I found the monument to be a welcome surprise in the world's biggest Muslim nation.

Borobudur Temple, along with the orangutans in Borneo, is another example of how much this country has to offer beyond Bali.

i remember visiting borobudur 15 years ago when my dad worked in indonesia. was amazed at how the government etc of indonesia had restored the entire site! i found prambanan as interesting... this article made me think of my visit... but i have forgotten so much, should go again!

Bhavani, I was amazed to learn they are always having to replace the metal sheets between the stones, which are there to protect the temple against damage from earthquakes. I think they replace them every 8-10 years, which requires removing all the stones, and returning them to the exact same position afterwards.

That place looks amazing. And its really old, too. I would love to visit this place one day!

This post made me think back to my travels in Sri Lanka for some reason...Buddhist connection I guess. Indonesia isn't high on my travel list, but Borobudur looks pretty interesting, sounds like you had a great time there, even with a 4am start!

Nick - Goats On The Road

Borabudur is amazing. We were there in the afternoon when there were quite a few people. Good for you for getting up so early! Even on a busy day you can find a little piece of it to yourself and stand in awe of this historical wonder. Thanks for the post!