I woke up and got to the bus stop in time to choose between the Dublin bus and the Galway bus. I chose to go to Galway, and try to catch a train (which would be free w/Eurorail). I ended up missing the train by thirty minutes. I decided to catch the next bus. By now, it had already been a long day of traveling. I decided to go for London and skip a final night in Dublin. I did get my souvenirs: 1 can of Guinness, 1 can of Kilkenny, 1 can of Carlsberg, a small bottle of Jameson Irish whiskey, 2 Guinness pint glasses, and a few more Irish music CD's and tapes.

I'm on the Stena Ferry now, which doesn't carry buses (like the other one I was on), but is twice as fast. Instead of three hours, it is only one and a half. This one is even more luxurious than the other, with more bars, gambling tables, and even a McDonald's. I just lent my headphones to a guy who said he would be bringing them back soon. It has been about ten to fifteen minutes, and I'm wondering if I'm too complacent to go ask for them back.

Well, I got my headphones back only because I caught the guy before he left the boat. I ended up getting an empty seat next to me for the bus ride to London. Just a little extra room to stretch out. I took my sneakers off for a bit. Wow, the stink was awful. But I don't really care at this point. 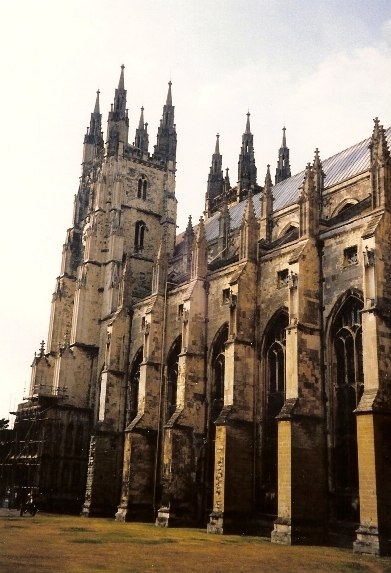 It is hard to tell how much sleep I got on the bus, probably three to five hours. I've decided to stay in Canterbury, England for the night and Paris for my final night. I'm really over budget right now. Therefore, I'm looking forward to going home with extra urgency. Spending money to see Ireland is one thing; to spend four days getting home is another. Suffice to say, I had no will power when it came to sticking to a budget. I've been traveling for 23 hours straight! I'm happy to get some sleep this afternoon.

I arrived in Canterbury and called the hostel. There were rooms, but they said that I couldn't make it to the hostel before it closed for the afternoon in ten minutes. This pissed me off. By the time I figured out where the hostel was (I needed to see a map), it was too late. And it turns out that I probably could have made it. I took a rest in a park, and decided to walk around (w/pack).

As I walked toward the hostel (to wait for it to reopen), I came across a $15 bed and breakfast mentioned in “Let's Go.” There was no lockout, so I decided to go pay so I could sleep. It was really a nice place. I stayed in a two bunk room with shower and toilet, and a TV. There were two Japanese students there too. I really enjoyed talking to them, as they enjoyed snowboarding, punk music (and the Beastie Boys), and Sony's Playstation. I took a three hour nap, only rising so I could see Canterbury Cathedral (and I didn't want to mess up my internal clock).

I made the mistake of paying to see the ruins of St. Augustine's Abbey. There wasn't much to see, and the hand held audio tour was boring. I went to the cathedral, which turned out to be free after 4:30 PM, so I guess it balanced out. The interior really impressed me, especially the architecture of the sculptures and courtyard. There were also some really amazing stained glass windows. I went back to the room since I was quite tired. As I learned in Doolin, it is hard to enjoy yourself while longing for rest. I watched a few episodes of Cheers, the Cosby Show, and Friends.

I can't believe people leave their trays behind in McDonald's and Burger King (and other fast food restaurants). This means the places have to hire more people just to clean up!