It's no secret I'm a huge fan of the Couchsurfing concept and website, so I was excited when I had the chance to meet up with Monika (a new couchsurfer and local Arlingtonian) last night for coffee and travel talk. As much as I am inspired by the written word and blogs, it still can't beat exchanging stories and experiences with another person who shares the same passion in life! 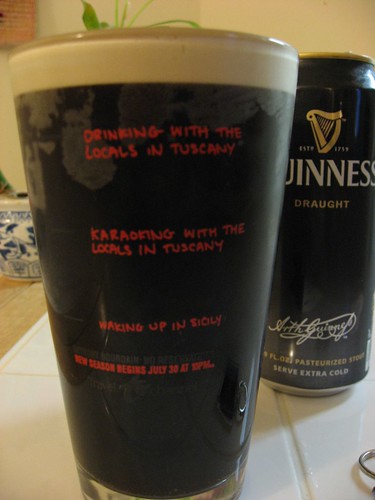 Monika had e-mailed me through Couchsurfing with some questions about my backpacking trip around the world, and it just so happened that she worked for The Travel Channel, so it seemed to be a match made in travel heaven. I gave her my copy of Wanderlust and Lipstick and she surprised me with a No Reservation's pint glass (which I promptly filled with a Guinness after getting home, in honor of host Anthony Bourdain).

We continued talking long after our coffees had been consumed. She was born in India, and had plenty of advice for me regarding that country, as she use to spend her Summers there after having moved to the United States as a child. My favorite experience though, was her 6-month tour of Europe as a Coca-Cola Ambassador. I didn't find out what that entailed, as I was hung up on the fact that it meant she could travel on the company's bill! She recommended Bratislava, Slovakia, for a sense of what an Eastern European city looked like from a Communist and Capitalist perspective (the division being a river through the city).

I especially enjoyed relaying my thoughts (and those I've read from others in the travsphere) about the various Travel Channel shows which I've watched, such as 5 Takes and 1,000 Places to See Before You Die.

Even if you have no desire to host travelers, or be a guest yourself, Couchsurfing.com is a great way to meet new people who share a common passion for travel!

PS – Monika – Thanks again for the pint glass. It's one thing I *won't* sell before leaving!