With all the hype on Australia having one of the harshest climates and being home to the world's deadliest creatures, you know… not very many people have actually died from them.

Still, it is one of the first things I hear about from family and friends back home. “Oh, I couldn't go there! They have so many snakes and spiders that can kill you!”

True. There are plenty of things that could kill you (and it's probably a good idea to have comprehensive travel insurance), but the facts point to driving and even horseback riding to being deadlier in nature.

Here are the facts about Australia's deadly animals!

In the past 3.5 years, I've been face-to-face with several arachnids – most of them being simple orb spiders or the ugly, ugly huntsman. Those, luckily, are not dangerous to humans in the least.

On the dangerous end of the scale, I've heard of a friend finding a Sydney funnel-web in his basement (not too far from my home) and my flatmates finding a Redback Spider out on our front porch.

Yes, both of these spiders are considered to be some of the deadliest in the world because of their potential, but the fact is they rarely kill.

The Redback Spider, a relation to the black widow, bite actually only affects about 10% of people who have an adverse reaction to the venom.

You'll be happy to know that no person has died from a spider-related bite since 1979, as antivenom is now available for all native species.

Australia is an island country, with close to 60,000 kilometers of coastline and deep ocean on its surrounds.

These oceans are home to Great White sharks, Tiger sharks, and Bull sharks.

Okay, so it's been a bad year for shark attacks, especially off the coast of Western Australia, but hear me out.

According to an article from Australian Geographic, of the 877 shark attacks that have happened in Australia since 1791, that's over 221 years, only 216 have been fatal. That works out to be about 1 fatality per year.

When considering more recent years, since 2000, the number has been a little more at just 2 fatalities per year.

Sure, snakes are a scary business in Australia, but how scary?

It turns out that up to 3000 Australians get bit by snakes each year, but just an average of 2 a year are fatal.

Of those, the majority are caused by the brown snake.

I must admit, it is a little off-putting when you reach the most spectacular and gorgeous beach in the tropical north of Australia just to be met with a sign that reminds you that there may be crocodiles in the vicinity.

Recent studies that point to the crocs being able to travel long distances by “catching waves” are also a little disturbing.

The last thing you want to see while catching some rays is a crocodile rocking up on the beach next to a surfer!

Still, those pesky crocs actually cause fewer than 2 fatalities per year in Australia.

The Box Jellyfish is tiny but deadly. I remember seeing one on display in a jar at a caravan park in the tropical north of Queensland to warn visitors, and to think that little thing – almost clear in color – could be so ruthless was shocking.

With the box jellyfish, a person can go into cardiac arrest within minutes.

This depends on the amount of tentacle that touches the body.

To deactivate the stinging cells of the tentacles, vinegar has to be poured over them for at least 30 seconds.

Luckily, these jellyfish only populate the waters of the tropical north during the months of October through April.

Another plus is that these little jellyfish don't cause more than 1 death per year on average. 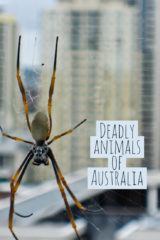