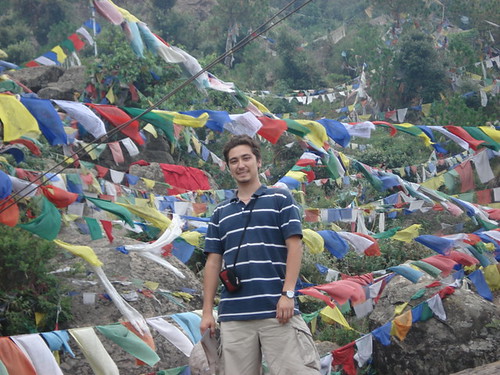 Many travelers in Dharamsala that I met told me that they were just staying a few days and then moving on to the north, mountainous town of . After talking to several people it was clear to me that I had to visit Manali. My family including my grandpa, mother, uncle, and aunt, all wanted to make the trip as well. So I patiently waited 4 weeks for them to get ready and then we finally drove off in a rented car with driver.

Since my family was coming along I knew our trip would have a heavy Buddhist influence to it. The plan for the trip was to do one night at and then two nights in Manali. The trip from Dharamsala to was astonishing. We stopped at several waterfalls and Gompas (small Tibetan Buddhist temples). Our driver, like most in , was a little bit crazy. My grandfather ended up puking a couple of times on the ride…which I found strange at first, but then I came to the realization that the guy has probably been in a car less than a dozen times and was getting old. is considered to be an important stop to Buddhist pilgrims and is considered to be an important holy site to Hindus, Buddhists, and Sikhs. Several temples are located along the small lake which legend has it was formed by Padmasambhava, who was burned by a local Hindu king for teaching the king's daughter. Padmasambhava was responsible for spreading Buddhism into . The lake is stocked with a large amount of fish that are fed daily by visitors. I don't think I've ever seen so many fish in such a small area fighting for food! In the small town we met several natives from Ladahk, a region that is very similar to in language, culture, and geography, also on Buddhist pilgrimage. 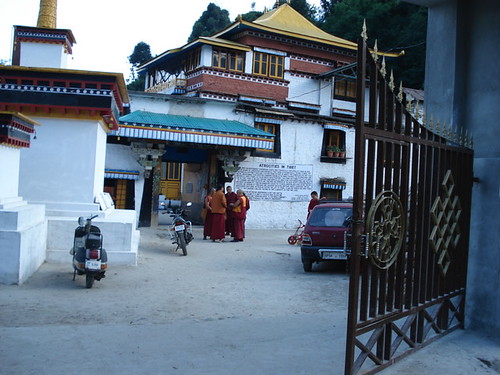 The next day we packed our bags and our driver took us to a temple above Rawalsar. I suspected that the driver was still drunk from the night before, but it didn't seem to affect his drivingtoo much. The mountain side temple was where Padmasambhava was said to have meditated. A few of the boulders outside of the temple have footprints embedded in them that are said to be from Padmasambhava. As strange as it may sound, this might be true. Multiple yoga masters have been able to embed their footprints in objects as hard as boulders, and it has been demonstrated multiple times near the temple. The temple was remarkably peaceful and consisted of a network of caves. Several Buddhist monks to this day live in solitude meditating inside the caves to seek enlightenment. I was surprised at how cute some of the female monks looked. Unfortunately the cuter ones refused to take a photo with me! After a couple of hours of walking around the hillside and eating random berries that led to a stomach ache, we headed off to Manali.

This series on India was written and submitted by guest author Stefan K. See more of his photos from India.

I wish I could visit one day India! Very nice country....