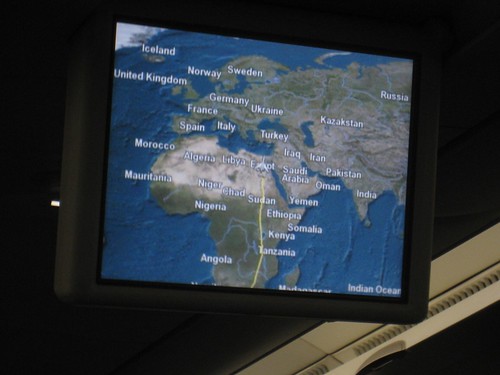 I managed a few hours of sleep, despite the nudging left elbow of the tall man to my right.

I was near the front of the immigration line which did little good once it was my turn as I failed to buy the $15 Visa at the little bank kiosk.

Thirty minutes later, I picked up my bag, withdrew my first Egyptian Pounds, and took a taxi to the Rough Guide-listed Berlin Hotel in central Cairo.

The streets were empty at 6:30 am. It was colder than I expected. About 55 degrees Fahrenheit.

My driver was weaving through the little traffic on the roads at high speeds. There was a smoggy haze over the city.

The profile of satellite dishes topped off the low rise buildings.

My driver walked up to the 4th-floor hotel with me so I could make sure a room was available.

Once the owner was contacted, I confirmed a room, though it would not be ready until 12 pm.

I left my bag behind reception and headed west for my first view of the Nile River. 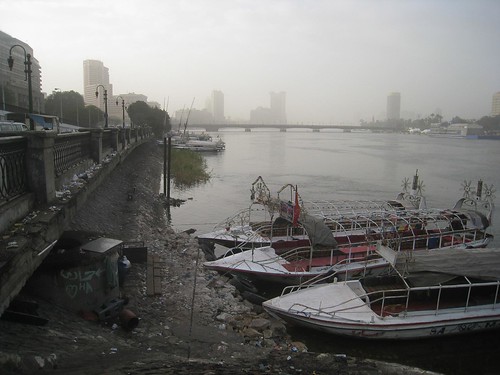 I felt free to walk like a clueless tourist again after being a few shades shy of paranoid in South Africa.

Walking through the quiet streets at dawn, I felt echoes of my experiences in India and Hong Kong.

When I reached the Nile, the sun was further up in the sky, though it wasn't much warmer.

It was a dreary first impression.

Choking on the fumes from cars and buses, I was doubly taken aback when leaning over a railing, I caught a whiff of the garbage lining the river's edge. 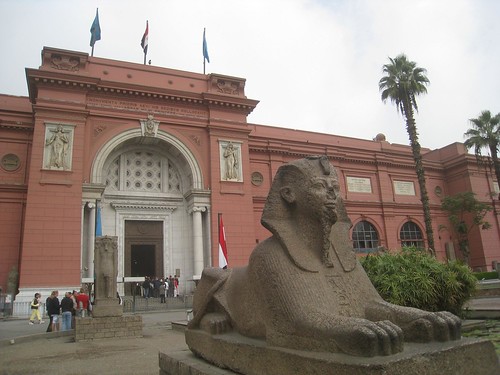 Walking back from the riverfront, I bought a ticket for the Egyptian Antiquities Museum and queued up.

In the courtyard, there were tourist groups galore, reminiscent of The Royal Palace in Bangkok.

The fashion sense of some of the women was out of this world. I'm attributing them to eastern Europe or Russia.

Once the gates opened, I again had to go through a line twice, this time because I forgot to check my camera at the main gate.

Inside, it was overwhelming. I visited King Tut's coffin and treasures, meandered through the main corridors, and skipped the $20-extra mummy room in favor of the mummified animals (at no extra cost).

I was keenly aware of all the tourist groups, I've never seen so many in a museum.

Guides were speaking all sorts of languages, yet I knew if I was on a tour, 99% of the info would go in one ear and out the other so I let curiosity be my guide.

My curiosity was satisfied after a little over an hour. 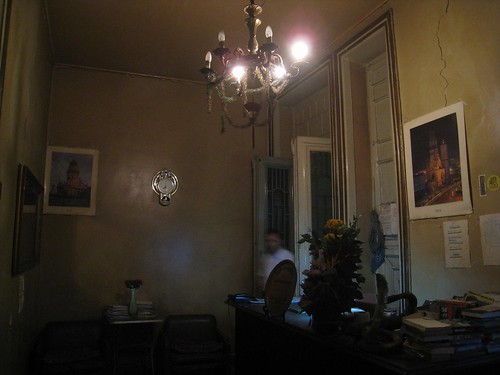 Returning to the hotel, I used their dial-up internet access, and finally got a key.

There was an old-world charm to my room, the hotel, and the whole building.

Its mustiness reminded me of places I stayed in India.My bed was a basic cot but I've slept on worse.

The good thing about my short stay in Egypt is the discomforts of a cheap room are more bearable (though $15 per night is not cheap in my book).

After a nap, I bit the bullet and booked a 3-night Nile cruise, including 1st class night train to Luxor, an extra night in Aswan, and return night train, through what I hope was a reputable Egyptian travel agency I happened across on the street.

After the details were wrapped up, one of the guys walked me to a nearby restaurant where I devoured falafel and a tasty chicken shawarma sandwich.

I continued to walk around the streets which were much busier now that the sun had set.

I took a small table at a sidewalk cafe and ordered mango juice and a sheesha (waterpipe) with apple-flavored tobacco.

I considered the experience to be a social one, but like me, there were many guys huffing and puffing alone.

I smoked and smoked because it didn't seem harsh like cigarettes.

I then proceeded to cough up my left lung for the remainder of the night.

I absolutely adored Egypt, I'd dreamt about it since I was a little girl, and I wasn't disappointed. I feel I should share with you an amazing course I did while I was in Cairo, Sarah Merron of Fire Dragon Coaching teaches strategies that really helped me focus on getting the best out of myself and others around me, for both my work and personal life. She runs courses all over the world, so it's a fantastic way to combine travel with self-improvement.