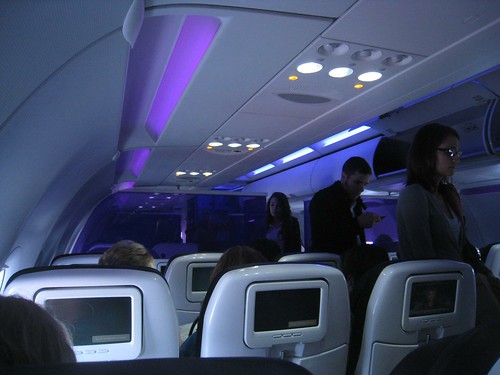 The dim purple and blue cabin lights are easy on the eyes.

On the recommendation of my friend Stefanie, and as the result of a nice sale, I took my inaugural flight on Virgin America.

For $280, taxes included, I flew round trip from Dulles, VA to Los Angeles, CA.

Purchasing the ticket and picking my seats online was a breeze.

I signed up for e-mail and text alerts in case there were any delays, and even handled the check-in over the internet the morning of my flights.

Being able to print out my boarding pass from home meant that I could save time (and one potential line) at the airport by heading straight to security.  It worked like a charm in both directions. 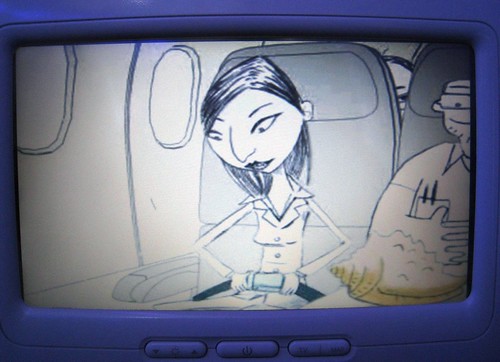 My last series of flights was on Ethiopian Airlines, and it was often disorganized when it came time to board the planes.

There was no such problem with Virgin America — I cannot recall a more orderly boarding process.

As an aside, apparently Stevie Wonder walked off the plane I boarded in Dulles, but I missed him despite sitting very close to the walkway.

Upon boarding the plane, my eyes were treated to a cabin dimly lit with purple and blue lights.

It was a refreshing change from the harsh fluorescent lights that are standard on most carriers.

I took my window seat near the front left of the plane and started playing around with the touch screen display in front of me.

It was much easier to use than the (typical) remote in the armrest.

As we taxied to the runway, a humorous animated video reminded us of the safety information. 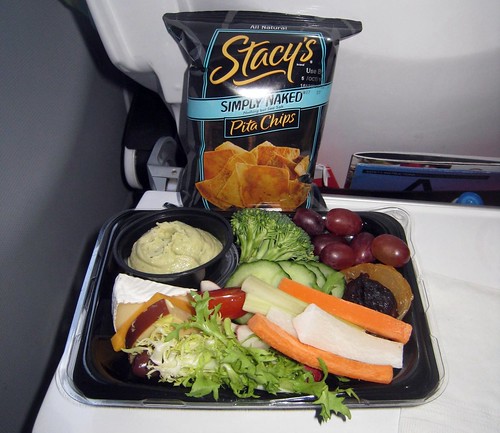 The $9 tapas plate includes avocado hummus, chips, and an assortment of cheeses, fruits, and veggies.

It wasn't until I started flipping through the flight's service brochure that I remembered you don't get free food on domestic flights.

If you can believe it, I hadn't flown a domestic route within the USA in about 5 years!

I had become so accustomed to free meals on planes, it didn't occur to me that I should be bringing snacks on board the 5 1/2 hour flight.

I used my hunger as an opportunity to try out the food ordering process, which involves picking your meal via the touch screen display and paying right there at your seat by swiping a credit card.

It worked perfectly, and it didn't take long for my tapas plate to arrive.

I'm not normally one to order fruits and veggies over a nice sandwich, however, the selection of cheeses and avocado hummus sounded delicious at the time.  And it was. 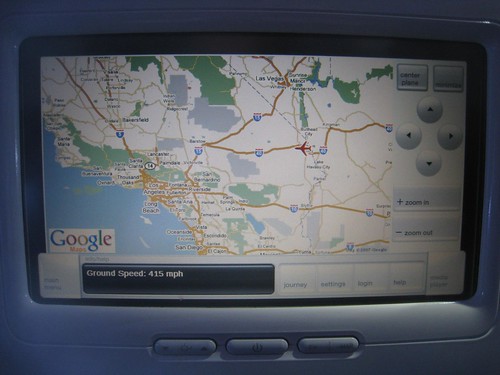 Track your flight's progress in real time with Google Maps.

I had a lot of fun tracking our flights' progress with the touch screen.  I also made a playlist from the wide selection of music that's available and listened to that instead of my MP3 player.

Sidenote to Richard Branson — be sure and add the Red Hot Chili Peppers to your library.

I also caught up with a few episodes of Bravo's Top Chef thanks to the free satellite TV service.

Premium movies were $8 which was tempting, but too steep for a medium length flight.  Foreign flicks were $5 each.

The connection was fast, though the cost was again higher than I would pay on an ongoing basis.  If I had work to do, or the flight was longer, I might consider paying for it again.

The Wi-Fi is available through Gogo Inflight Internet, which offers a monthly rate as well. 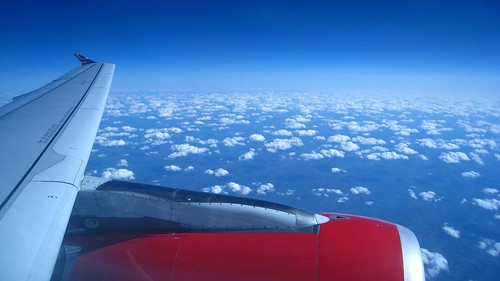 The American flag on the Virgin wingtip is a nice touch.

And last, but not least, the service from the actual humans still involved in the experience was wonderful.

The self-service approach to ordering food on the flight meant that the aisles were clear most of the time, and it was easy to visit the bathrooms (which were clean and smelled pleasant…I think there was even music playing back there).

Overall, Virgin America feels like a more contemporary airline than any other I've flown.

I'm already looking forward to my next chance to fly with them.

Welcome Christine, though there's one thing I didn't check out via their entertainment system â€” the Virgin stewardess TV show â€œFly Girlsâ€

Welcome Christine, though there's one thing I didn't check out via their entertainment system â€” the Virgin stewardess TV show â€œFly Girlsâ€?

great write up Dave! I can't wait to fly with them myself.

You have definitely sold me! I've heard nothing but good things about Virgin, but this was a very nice summary of the highlights. Would definitely be interested in trying them back in the States. Thanks for the info!

Welcome Christine, though there's one thing I didn't check out via their entertainment system -- the Virgin stewardess TV show "Fly Girls"

I also love Virgin America! I was lucky enough to get a $250 flight from Dulles to San Fran back in January and it was delightful. We even took off early and I also had an entire row to myself. The flight attendants on my flight were very friendly and you could tell they liked their jobs. On the way back to Dulles I splurged on the Main Cabin Select and it was worth the "perks" - more leg room, 1 checked bag, free movies, free food and of course exiting the plane before the rest of coach. I will definitely fly them again, I hope they add more domestic routes!