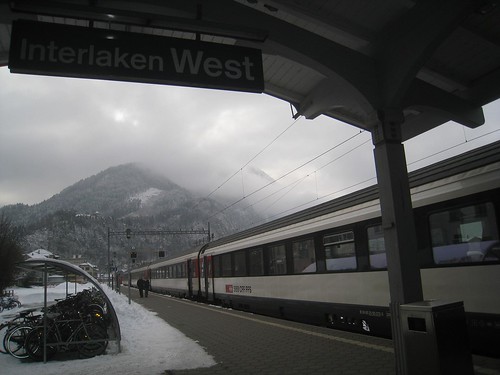 The train ride to Interlaken allowed me to see my first views of the Swiss countryside, and there was plenty of snow cover, but clouds and fog conspired to hide the mountains. Interlaken is a resort town and Europe's version of Queenstown, New Zealand. Billing itself as an adventure destination, winter activities include the usual skiing and snowboarding, plus more exotic options such as glacier treks and ice climbing. The latter appealed to me, though not at this point in my trip when funds are low, and motivation for physical exertion is waning. Summer fun includes whitewater rafting, rock climbing, and skydiving. 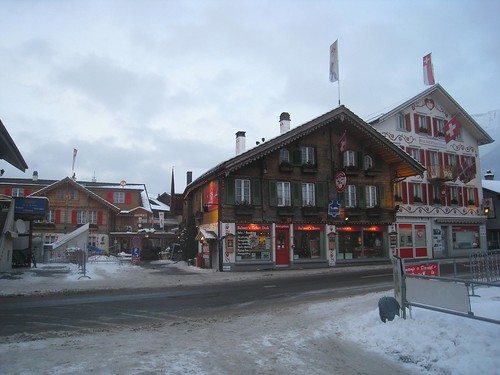 It was a short walk from the western train station to Balmer's Herberge. At 60 years of age, it was the oldest private hostel in Switzerland, and a perennial favorite amongst backpackers. The complex of three buildings was a little overwhelming, though I imagine it is a beehive of activity in the high season. I ate a nice traditional lunch of veal sausage in onion sauce with rosti (shredded potatoes in a pancake form). 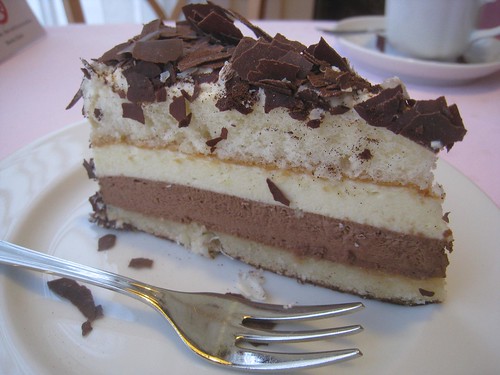 I picked out a cappuccino torte from the adjacent bakery for dessert. The restaurant, featuring pink tablecloths and a piano player, was populated with lots of older folks. And at $30 for the meal, it was understandable why the backpackers were probably cooking Ramen in the kitchen of Balmer's. I spent the night debating whether to visit Karin in Luzern, our initial meeting having been in Jeffrey's Bay, South Africa. 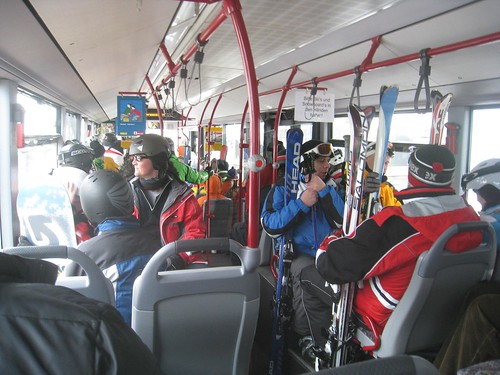 I seized my one full day in Interlaken to reach Schiltorn, a 2,971-meter (10,000 foot) peak with a rotating restaurant overlooking the Swiss Alps, and more specifically, Jungfrau (4,158m), Monch (4,099m), and the infamous Eiger (north face, 3,970m). The process involved taking a bus to a train. The train ride through the snowy landscape, alongside cold streams, and up the mountain valley, was classic. Throw in the skiiers and snowboarders, and I was in the Warren Miller movies I use to fawn over as a teenager. Skiing in the Alps was a fantasy then, and would remain as such since I wasn't ready to pony up the money for equipment and clothing rental, plus lift ticket. 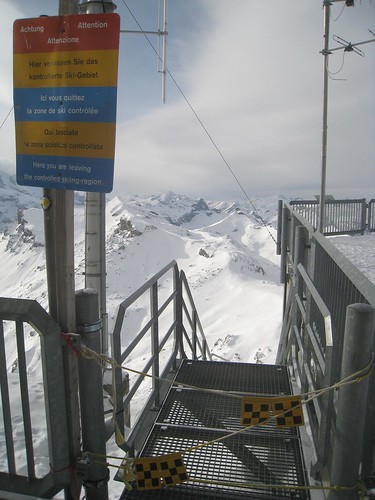 The train segment ended in a town where I then caught a bus again. The bus dropped us at the first in a series of cable cars which lifted people up the mountains. I counted three different cars to get to the top, each providing a more impressive view of the mountains than the one preceding it. 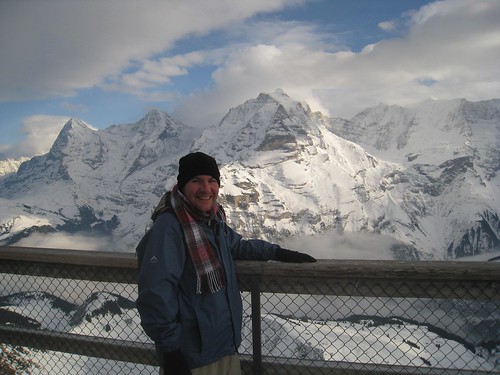 Atop Schilthorn, I took in the 360-degree views at a relaxed pace, despite the freezing temperatures. We were above the clouds which blanketed the lower elevations, but views were still obscured along the horizon. After taking as many photos as my fingers would allow, I sought shelter in the restaurant. To make the most of the experience, I decided to enjoy another traditional Swiss meal, cost be damned! 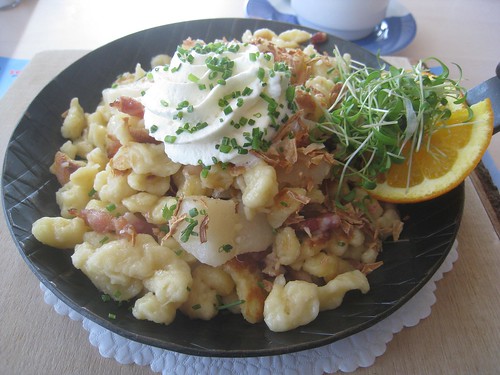 I ordered Spatzli Delight, mini dumplings with home made cheese spatzli, bacon, roasted onions, and pear slices. And hot coffee to drink. My table on the outside ring of the floor, took 45 minutes to slowly spin around in a complete circle, offering me all the views in a warm and comfortable setting. The majority of other diners were skiing as well as taking in the views. I was content with the sightseeing aspect alone. 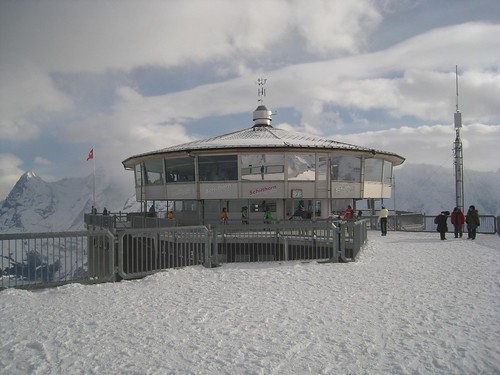 After lunch, I sat in a dark theater for tourists, and admired film clips of the mountains during the summer, as well as winter. More importantly, I saw the scenes from the James Bond movie, ” Her Majesty's Secret Service,”? which were filmed at the same location, after construction on the restaurant had been completed in the 1960's. It marked the second time I'd visited a filming locale for a Bond movie (the first being in Thailand). 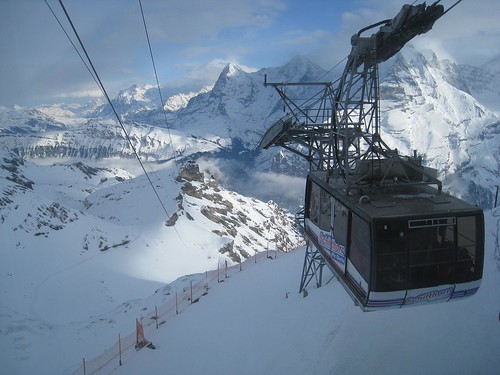 Returning to the hostel, I reversed the order of my ascent. Three cable cars, two buses, and a train ride. I watched a bit of TV, wrote by a wood-burning stove, and tried to fall asleep early. 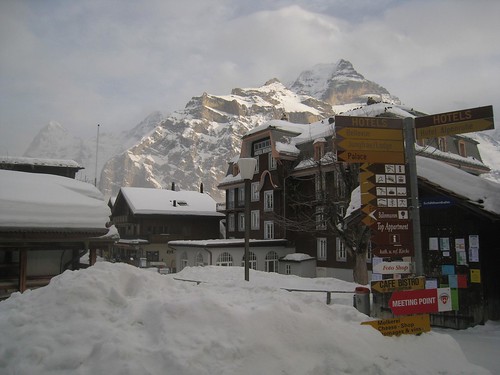 I am really enjoying your Blog, I stumbled upon your site while doing some research about Colombia. I am from Switzerland and am traveling since march 2011. I started in Venezuela where I spend about 6 months and now I am in Trinidad & Tobago waiting for carnival :-)

Seeing your post about Switzerland and the food made me kinda miss my home. But then seeing your pictures of Cartagena makes every thing good again cause I'll be there next march :-)

greetings from a fellow traveler David

Thanks David - I'm sure you'll have an amazing time in Colombia! And if you get this response, let me know how you felt traveling in Venezuela. I have no plans to go there as I'm concerned about the safety situation.

Considerably, the post is in fact the freshest on this notable topic. I concur with your conclusions and will thirstily look forward for your next updates.I will immediately grab your rss feed to keep abreast of any updates.

The ancient exotic fountains, the majestic arcades switzerland clothing that seem to be eternal and caring, the Kunstmuseum or art Museum with the original magnum opus of the genius Swiss painter Paul Klee, are some of the outstanding features of the Bern city.

The ancient exotic fountains, the majestic arcades switzerland clothing that seem to be eternal and caring, the Kunstmuseum or art Museum with the original magnum opus of the genius Swiss painter Paul Klee, are some of the outstanding features of the Bern city.

Definitely worth a visit to Switzerland once, but the cost was so high, I probably won't be back for a long time!