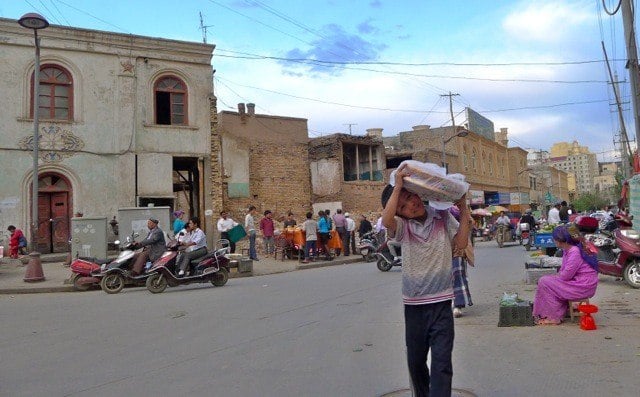 [A]bout a week ago, I ventured down from central Kyrgyzstan across the Torugart Pass until reaching China's ancient city of Kashgar.

Kashgar, located in the western area of China in the Xinjiang Uyghur Autonomous Region, closer to the Tajikistan border, has a special draw because of its ties to the Silk Road.

When doing our research, the ability to explore a place with such ancient ties are what initially drew us in, but the more we heard – particularly about the predominant Uyghur population and how many Chinese will consider this a “dangerous place” – I have to admit, the more intrigued we became.

“There are places in the Old Town that when you walk around in them, you won't even feel like you're in China,” explained our driver who took us from the edge of the Chinese side of the Torugart Pass to Kashgar.

He was absolutely spot on. I would say there were many moments in Kashgar where we felt like we had gone the other way from Kyrgyzstan and somehow ended up in the Middle East.

Besides that, we also learned from our driver that Sunday is a popular day for visitors in Kashgar, particularly because of the Sunday Bazaar and Animal Market. 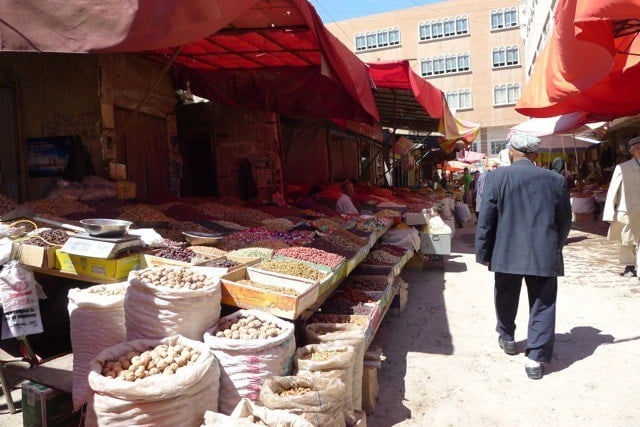 As far as bazaars go, the Sunday Markets of Kashgar take the cake with a history that is said to date back around 2000 years.

This bazaar is located, because of its size, on the far end of town near the East Gate, and it is also known as the “International Trade Market of Central and Western Asia”.

While the bazaar is open every day of the week, traders from all over neighboring countries make the trek into Kashgar each Sunday to be a part of the main spectacle that encompasses over 4,000 permanent stalls and an entire street dedicated just to food.

It is possible to shop for the following goods: carpets, jewelry, instruments, pottery, fruits, nuts and meat. 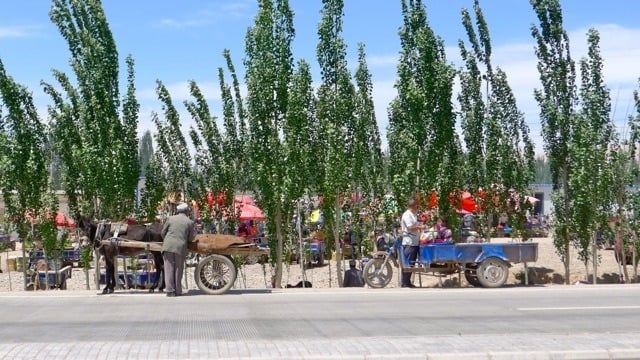 Outside the Animal Market.

On the opposite end of town, only on Sundays, the Animal Market takes place. The Animal Market was at one time a part of the great Sunday Bazaar, but it split off to become a show all its own in a big open area across town.

The animal market is the place where locals and traders from afar gather to buy, sell, and trade livestock – especially sheep and cow. To the locals, it is just another day of work, but for tourists, it is clearly a step into the past. 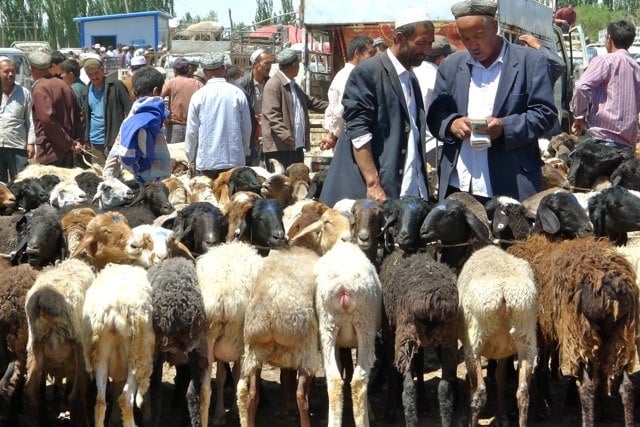 Local Uyghur men, dressed in traditional garb, herd or haggle; when they get hungry, they just head to the sidelines where various food stalls have been set up, each cooking a dish made of fresh mutton.

We saw sheep head soup and sheep laghman going down a treat, but for me… well I'd rather not eat my food right next to where a group of animals is potentially defecating.

You will need a taxi to get to the Animal Market, which will cost 15 to 20 RMB, but on the way back, you might have to take one of the small carts unless you're willing to wait a while for a proper taxi.

A small warning: I, at times, found it very hard to walk around the animal market given the conditions provided to the animals, so if you have very strong feelings towards animal rights and living conditions, it might not be a place for you to visit.

Other Attractions in Kashgar

A visit to Kashgar is made special just by being able to see life in action. The markets, the big Sunday Bazaar, the Animal Market, and the food and drink culture are all unique aspects of the city.

Other than that, one can visit:

Kashgar is one of the westernmost cities in China, so getting there involves a hefty trek. You can fly from Beijing, but there is probably a mandatory stopover in Urumqi.

Otherwise, you can take a 1 day, overnight train from Urumqi, or if coming from Kyrgyzstan, take a day-long drive and border crossing through the Torugart Pass.

Our entire journey from Naryn, Kyrgyzstan to Kashgar, China took us around 8 hours via the pass.

Indeed Kashgar is quite distinctive from rest of China. I haven't been to Uzbekistan and Kyrgyzstan (always wanted to go to Uzbekistan), but the Uyghur culture is so close to Uzbeks culture and custom, so the culture of the market might same as well.

Looks awesome. I've been wanting to get to Kashgar market for years. It looks very similar to all the markets I visited in Uzbekistan and Kyrgyzstan.