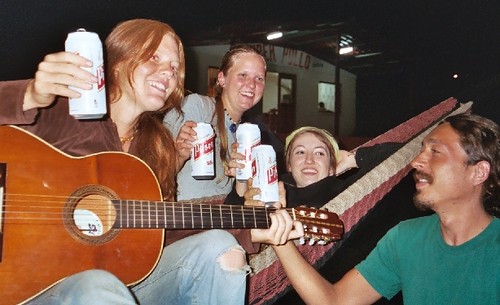 I skipped a journal entry for the first time yesterday, day 12.  The night of 5/22 was chill, hung out in front of the hostel a bit, grabbed a pic of a girl Erica who was playing the guitar. It brought back memories of the guitar classes I took as a teenager.

I went to meet Jen at 7pm for dinner though she never showed.  I went and got a chicken pizza, which was good.  Did some people watching.  Back at the hostel it was kind of loud, so I went to bed at 9 am.

I was up at 5:45 am Monday to catch the 6:15 am bus to the Monteverde Reserve.  Got there, bought a few souvenirs, coffee.

Guided tour was a bit costly, though to know it goes toward helping the preserve made it palatable.  Our guide was friendly and informative.

Early on, we stopped for a bit at a known nest of the Resplendid Quetzal (bird).  Eventually, a female showed up and looking through the scope, you could see a lizard in her mouth. Apparently she wasn't eating it because it was food for her babies.  A little later, a male showed up too, probably an adolescent, maybe last year's nestling.

I got pics of some hummingbirds, insects and orchids.

We heard howler monkeys when it started to rain toward the end of the tour.  I shouldn't have brought this journal and books with me to a rainforest!  Or at least used a plastic bag.

After the guided tour, Stefan (a guy from the hostel) and I walked another trail to a waterfall (about 2 km roundtrip).  With the guided tour, that put us at at least 4 km so far in the day.  Then we decided to try to see the San Luis waterfall.

We walked about 2 km back to town.  We found the sign, it pointed down the side of a mountain, 1 km.  We headed down, maybe halfway was a scenic outlook point.

It then started to rain.  We began walking back to the main road, getting drenched.  My feet weren't causing trouble, which was good.

Lastly, we toured the popular nearby cheese factory.  The one hour tour was kind of boring, though the cheese samples at the end were good.

Afterwards, we shared a 4×4 taxi back to town with (2) other Americans.  It was well worth it, considering it rained, no poured, the whole way.

Walking around with Stefan was fun; we had a lot in common, talked about politics, travel, Buddhism, drugs, rave scene, and more.  His mom fled Tibet when the Chinese invaded, and met his dad in Switzerland.

He was from Phoenix, AZ, and we exchanged e-mails so should I ever visit. We shared a couple of beers, some fried chicken, and a later meal at the pizza place.

This morning, Tuesday AM, I was on a bus at 6 am to Puentarenas. 3.5 hours total, of which 2 hours were quite bumpy, 4×4 only type dirt, rock-studded roads.  It was tiresome.  Eventually it ended, got to asphalt for the last hour or so.

I grabbed a taxi to the ferry, got some ham/eggs and coffee, couple of ice creams, and hit the 1.5 hour ferry ride to Nicoya Peninsula.  A bus to Cabano was waiting.

I grabbed it, and figured mine as well go all the way to Malpais today, totaling 9.5 hours of travel, way more than I expected.  The poor roads and frequent local stops slow you down quite a bit.

For that reason, I had to nix Tamarindo and Barra Honda Park (caving).  I figure I can do 2 nights in Malpais, 2 in Montezuma, back to San Jose Saturday, and home Sunday.  The days seem shorter at this point in the trip.

I have to remember to stay present in the moment, to experience as much more as I can in my time left. I might even run into Alice.  Who knows what awaits!