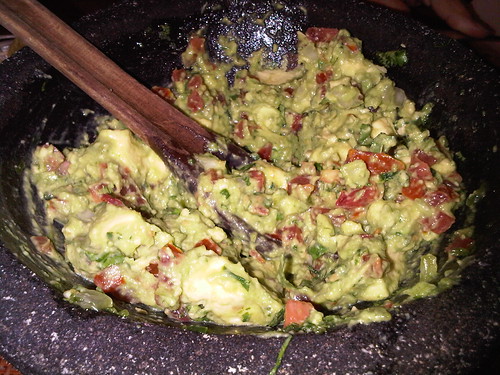 I've already written about the book launch party for The Best American Travel Writing and the 2009 Adventures in Travel Expo, so it's now time to fill in the gaps of this 4-day NYC escapade.

Friday morning, I twittered my way into consciousness and made plans to meet my friend at the offices of College Humor near Union Square.

Expecting to exit the elevator into a maelstrom of sophomoric hijinks, I was instead met by the sound of silence. Even the crickets had left for the weekend.

We walked a few blocks to meet my brother at Rosa Mexicano.

The interior of the restaurant, with its wall of cascading water, was very inviting. We grabbed a booth in the back and ordered lunch. 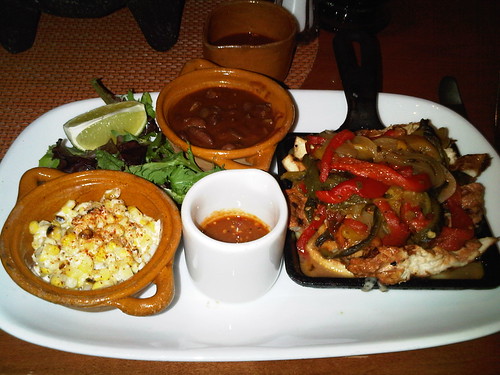 Fresh guacamole was made to order tableside and served in a giant mortar.

Along with freshly made tortilla chips, it was the bomb. I love “good” fat.

I ordered the chicken tacos, though the menu description and a photo are necessary to do them the slightest bit of justice:

Rosa Mexicano might cost a little more than your local Mexican restaurant, with lunch entrees hovering around $13 apiece, however, the food is to die for.

I left with little desire to do anything but sleep, yet I had more internet company offices to visit. 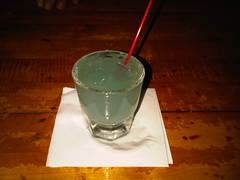 Absinthe on the rocks

Next was Yext. You remember Yext, right?

I wrote about them a few months ago during a previous visit to NYC.

Since then, they debuted at TechCrunch50 and secured $25 million in new venture capital.

My brother left his production work on Hollywood movies to join them.

The new office in Chelsea Market looked like it offered plenty of room for growth.

Even though I wanted to crash The Food Network studios (located there as well), I had one more office to visit.

I took a taxi to the new Soho office of Sean, Alisha and the gang of Sosauce.com.

They welcomed me with open arms, and we talked about the postcard contest they've got running and South Africa, among other saucy things.

I forgot what I did Friday night, but I assure you it was awesome.

Saturday night, my brother took me out for sushi on St. Mark's, and then we shot some pool at his favorite local dive bar, Cherry Tavern.

I noticed absinthe on the menu and remembered hearing that some kinds were now legal in the US.

After assuring the bottle on the bar included the fear-inducing ingredient of wormwood, I ordered a glass on the rocks.

At 100 proof, it takes a good constitution to drink slowly, but I enjoyed (most of) it.

We then met my friend at Nevada Smith's for the USA v. Honduras World Cup Qualifier.

For stupid foreign TV rights and money reasons, this very important match was only available by pay-per-view, so options for viewing it were limited.

And as I previously wrote, Nevada Smith's is NYC's best soccer bar.

It was packed on both floors with shoulder to shoulder drunk dudes.

It was insanely hot and smelled of B.O. and bad beer breath, but the match was awesome, and the USA clinched a 1st round appearance in the 2010 World Cup in South Africa. 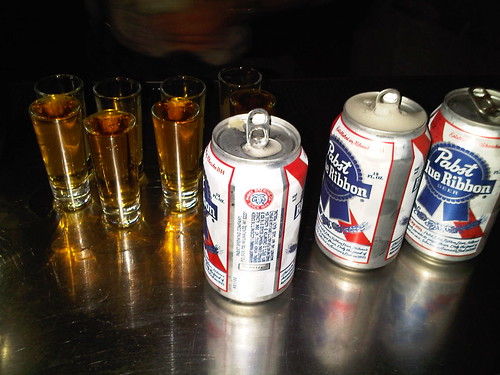 After the match, we had a beer at a bar across the street with a friend of my friend and grabbed a taxi to a speak-easyish bar called The Randolph in Little Italy.

My friend had been talking incessantly about how you can chase a shot of Jameson whiskey with pickle juice to cut the bite.

I had no choice but to participate in imbibing this odd combination, though it'd be my last drink of the night.

After hanging out and congratulating some Honduran fans on a great soccer match, we hit one last bar.

Home Sweet Home was busy and stocked with a wide arrange of stuffed fowl.

In the early morning hours, the dance floor filled with New Yorkers getting their (drunken) groove on, I wondered whether the bartenders named the stuffed geese.

Well, the other guys said it worked for them. I only drank half the pickle juice, yuck.

Well, the other guys said it worked for them. I only drank half the pickle juice, yuck.

Pickle juice? Oh, wow. Did it work? Just thinking about that combination makes me feel ill.

For all the years I've been going to NYC since college, I still find it strange that Pabst Blue Ribbon is en vogue in the city's dive bars.

I think I'll be heading back to NYC again in early December. Hopefully get a job there some day :)

I miss NYC and I miss my cheap PBR! Sounds like you had a blast Dave!