Preface:  9 years ago, I was actively planning a trip to Egypt for the first time. I started documenting the process on this site (long before this blog), however my plans would come up against the shocking events of 9/11. This is a four part series, with the first three parts having been written in 2001. 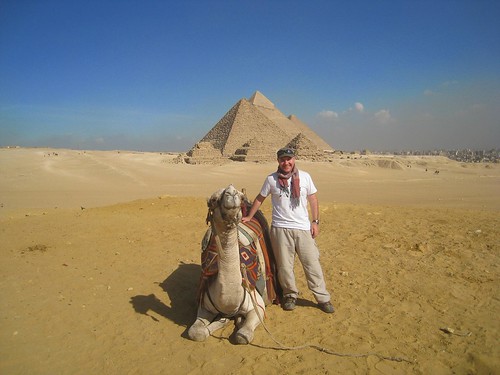 As I was spending some downtime checking out travel sites, I came across a deal that caught my eye on the Frommer's site.

My decision was instantaneous – I was going to Egypt, and soon!

Things seemed to come together for me as if stars were coming into alignment for some great event.

First, I had some money coming my way thanks to a bonus at work, a tax refund, and some auctions on eBay.

Second, I had over three weeks of vacation time saved and had yet to go anywhere in the year 2001.

Third, the deal just seemed too good to pass up. Here is the exact text I saw that morning:

If there is one indispensable visit, it is to the ancient culture of Egypt. And a famous tour operator has now created a nine-night visit there for only $390 plus the cost of round-trip air to Cairo.

You visit the Pyramids the Sphinx, and the Egyptian Museum downtown, and then go by overnight train to Aswan where you board an Egyptian felucca–a sail driven riverboat–for a three night cruise to all the classic sights of Upper Egypt and back to Cairo.

Since a round-trip ticket to Cairo can be purchased for about $700 from various airfare consolidators, you enjoy the entire experience for about a thousand dollars, as low as such costs go.  — Adventure Center

It wasn't only the price that attracted me. Let's take a closer look at the well-written ad that helped convince me to go to Egypt for the first time.

The first sentence refers to the trip as “indispensable” which makes it sound like I'm less than a world traveler if I never make it to Egypt.

Second, the words “ancient culture” bring forth images of a time long past.

Culture is a buzzword for us travelers. We love immersing ourselves in a foreign culture. Why else would we travel!

The second sentence helps build my confidence in the deal by stating that it's not just a normal tour operator offering the trip, but a ” famous” one.

By now I'm feeling safe that this is a reputable operator, even though I will do some homework on them later.

The second sentence also states the length of the trip, nine days, which seems like a good period of time to spend there considering the distance I will have to travel.

It also states the cost, and what is not included (airfare), as well as the destination city (Cairo).

The third sentence gives me a feel for some of the things I will see and do on the trip, as well as our modes of transportation (rail, river).

The fourth sentence helps push the deal by giving an estimate of how much airfare will cost, which helped me estimate the total budget I will need for the trip.

The sentence ends by reinforcing the fact that the trip is a great deal.

The last piece of information is the name of the tour operator and a phone number to call so that I can follow up.

Interesting. It sounds like you had a wonderful trip :)