According to the calendar, it's been a week since the 2nd annual Travel Blog Exchange (TBEX) conference wrapped up in New York City, yet as I type this post, sitting on my firm double bed, under a twirling fan, listening to the street sounds of Cartagena on a sunny Sunday afternoon, it feels like a lifetime ago.

TBEX, for me, was an opportunity to meet the travelers, bloggers, writers, and editors I'd been reading and interacting with for months, if not years.  It was also a chance to reunite with many people I'd met only briefly once before.

As much as I'd like to give a shout out to everyone whose company I enjoyed, the list would be far too long. 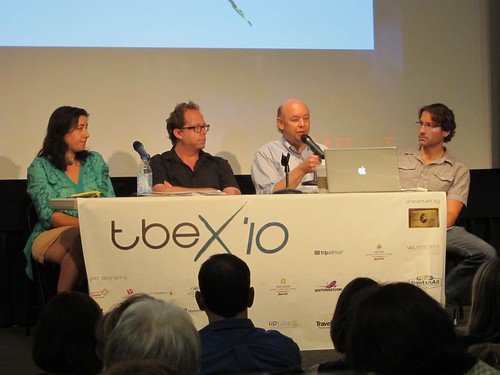 Trying to do justice to the art of narrative travel writing or strategies behind search engine optimization (SEO) in 55-minute panels is impossible, however there were plenty of valuable tidbits to grasp onto if one were so inclined.

In the first panel, I enjoyed hearing the likes of Don George, David Farley, and Jim Benning give nuggets of wisdom with regard to travel writing.  I'm sure that with practice, incorporating story arcs, quotes, and character development into my blog posts would get easier.  Being aware of these elements is a start.

In the second panel, my takeaway from Robert Reid of Lonely Planet was to experiment with video, even if you have no experience.  Learn as you go. 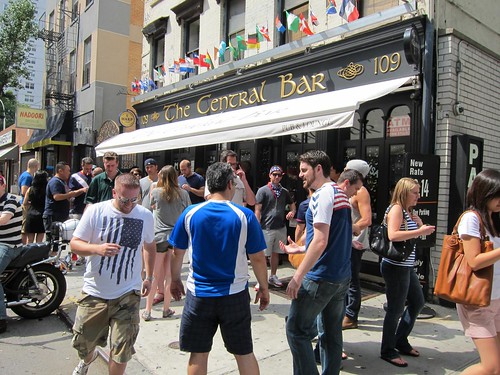 The scene outside The Central Bar at halftime during the USA v. Ghana World Cup match.

Due to the United States' strong showing in the World Cup, I missed the panels on working with Public Relations people, and Branding.  Judging from the crowd at Central Bar on the USA's weekday match, I wasn't the only one skipping work to cheer on the home team.

On the second day, during the ethics panel, it was interesting to hear how the Federal Trade Commission goes after the marketer first, not the blogger, when it comes to potential violations.  The bottom line from that panel seemed to be that all bloggers can breathe a sigh of relief.

The second day wrapped up with the panels on SEO and making money online, for which a whole day could've been devoted, and an abbreviated talk on podcasting.

The following day, Gary was named one of Time Magazine's Top 50 bloggers of 2010. 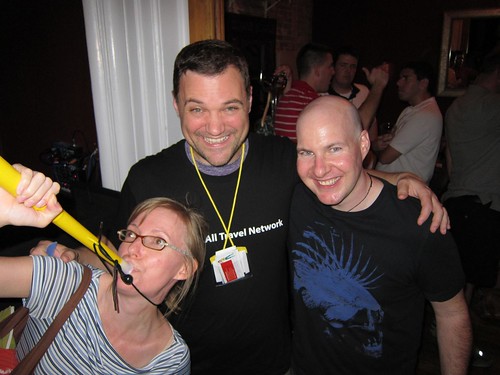 Sean Keener (BootsnAll), Michaela Potter, and I at the BootsnAll/Eurocheapo afterparty.

Kim Mance (founder of TBEX) knows her audience, so there were plenty of parties hosted by event sponsors.

The panels were informative, however for me, the parties were more important as that was when I had a chance to mix and mingle, and spend a little quality time interacting with people in person.  What a novel idea!

I'm happy to report that everyone's online personas match up well with how they are in person.  I take this as a great sign for our community — we're a sincere bunch.  And there were a few people I hadn't talked to much online who were a lot of fun to hang out with in person. 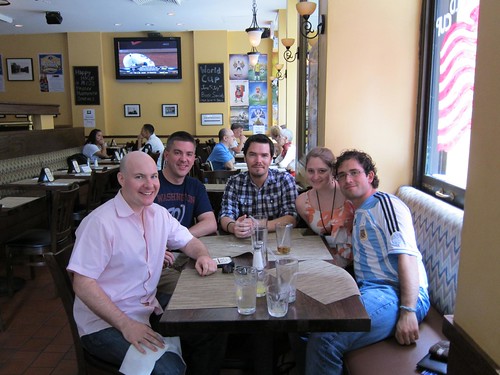 Lunchtime (from right): Mike, Stephanie, Mike Richard, Matt, and me.

Next year's TBEX is being hosted in Vancouver, Canada, which seems appropriate given the strong Canadian contingent of bloggers that showed up in New York.

It's still far too early for me to commit, especially given I don't have a brother in the city who can host me, however I certainly hope to be there.

Yes she hijacked my Vuvuzela... I can't blame her, it is a plastic party.

Great getting to meet you in person!! I loved NY and miss it (just got back yesterday) but reading that you are in Cartagena makes me miss it there!! :) Hope you are having a great time in Cartagena. How long will you be there? Try to stick around for the Dia del Independencia celebration month if you can.

Not sure if it was your vuvuzela that Michaela grasped onto, but I saw her with it everywhere that Saturday night!

Anthony - that's awesome that you were able to watch the live stream from halfway around the world.

What a shame I couldn't make it, but I'm glad that everyone had such an awesome time!!! Fingers crossed for Vancouver.