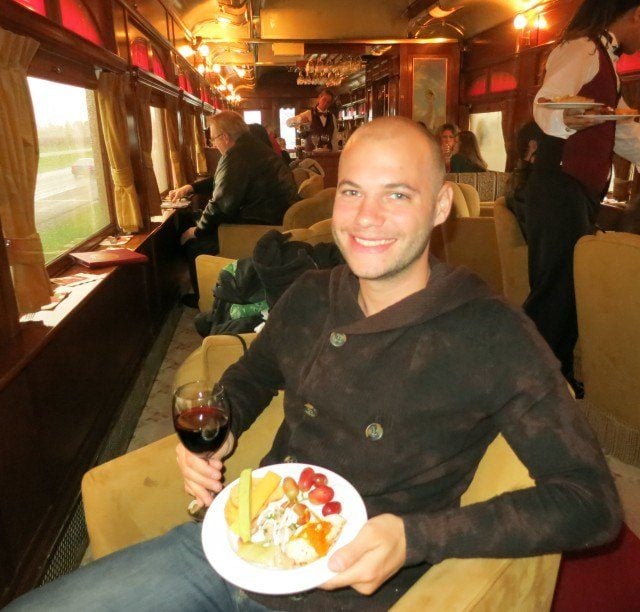 The author on the Napa Valley Wine Train

Nearly since the beginning of American history, from Lewis and Clark on, California has been a destination for generations of Americans wanting to create a new life for themselves.

Recently, I joined these generations of dreamers, these wide-eyed optimists who believed and still believe in the power to manifest one's hopes and goals in the Golden State.

And I can say that my vision, while not as grandiose as some, came true. I went to California and I lived my dream.

I got drunk on a train. The Napa Valley Wine Train.

The Napa Valley Wine Train runs from Napa, as one might expect, to St. Helena, a village some 25 miles away.

The train rolls through some of the most picturesque vineyards in the U.S. and the views are spectacular.

Alternatively, you can check out wine tours via bus, bicycle, walking, jogging (you get the point) with almost any tour operator, such as Extranomical and countless others in the region.

At least that's what they tell me. It was a bit hard to see due to the rain and fog.

But maybe the weather was a good thing. 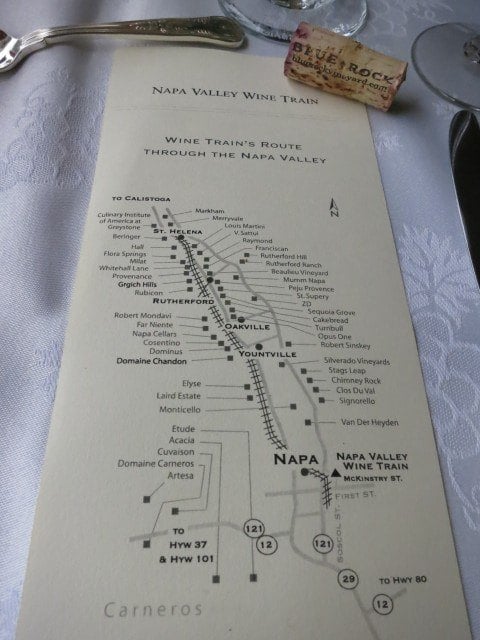 It prevented the fantastic scenery and beautiful rolling landscape of Napa Valley from distracting me from my purpose, a purpose shared by my traveling partner Sven (who is Swiss, and so not much impressed by flat scenery anyway), which was to get drunk on wine and eat spectacular food.

Eyes on the prize, after all. 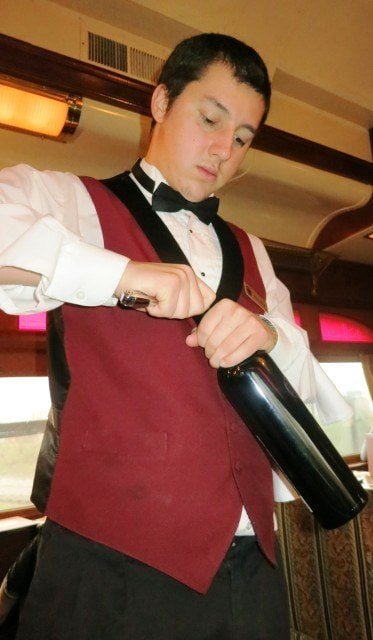 A well-dressed waiter opens our wine

Here's the thing about the Napa Valley Wine Train. Although it is a means of transportation, the train could be sitting in a field somewhere, not attached to any rails, staying in one boring spot, all those pistons and chu-chu parts rusting into paralysis, and it would still be a fantastic restaurant.

The most expensive is the Vista Dome, which, as the name implies, is a dining car with a glass roof. It's like eating on one of those glass-bottom boats, except exactly the opposite.

We were kindly invited to partake in the Gourmet Lunch package for $114 USD. This included a gourmet lunch with multiple courses throughout the three-hour train ride. If you follow our route you can expect the same schedule.

This all takes place on a very classy, old-style train car. I can imagine Hearst traveling to his castle on the California coast in something like this (although emptied of everyone else but him).

The third option is the Silverado, which is closed in the winter. It serves barbecue and apparently has a wild west feel.

I don't know if they allow you to shoot buffalo from the train in an effort to create historical accuracy, but I'm thinking not. 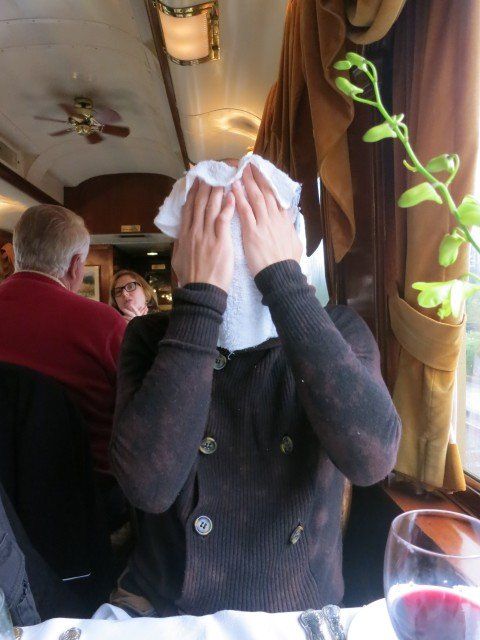 Freshening up before the food is served

And yes, when I say our car was classy, I referring to towels-for-your-face level classy. Nice.

The Napa Valley Wine Train started in Napa, which is the county seat of Napa Valley.

Napa Valley has been home to vineyards since the 19th century, but the industry really took off in the sixties when Robert Mondavi formed his own wine estate. 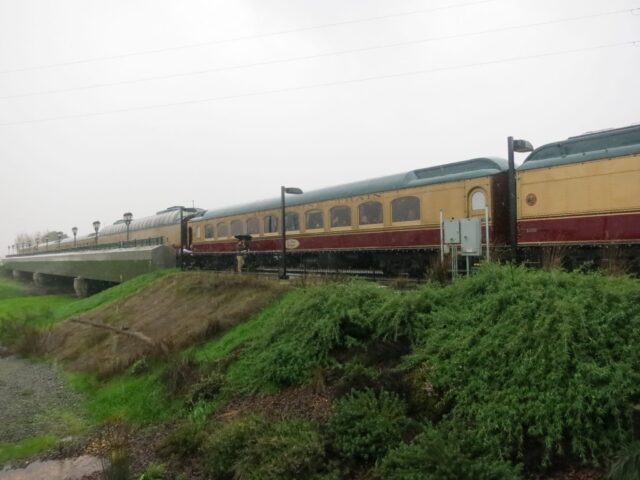 In 1976, a collection of Napa Valley wines won a blind taste test against some of France's best. This is what really put Napa wine, and California wine, on the map.

(They also made a movie about this called Bottle Shock.  It's pretty good, but it's hard seeing Capt. Kirk and the President from Independence Day care so much about wine. It seems like they should be worrying about larger issues. This is why you cast Paul Giamatti in movies about wine, Sideways, not Bill Pullman and Chris Pine.) 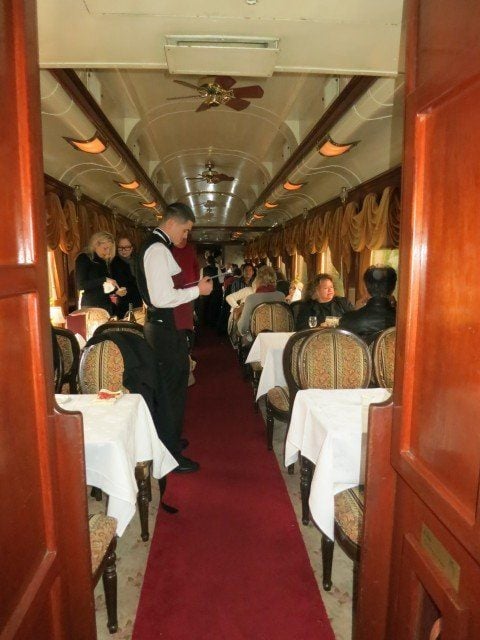 This is the dining car. The wait staff was excellent and super attentive.

This is Sven, already through round one.

As you can see, I'm trying to keep up. Although, choosing to drink white wine to get drunk is sort of like choosing to eat celery to get full, but whatever Sven. Europeans.

All the food was organic and locally sourced. Naturally, the wait staff knew a thing or two about wine pairings.

That is why before embarking on our gluttonous journey we ventured into the Napa Valley Wine Train's own wine store to pick up a bottle of red and white wine, Swanson Just Married Red Napa 2010 to be exact.

This blended red wine tasted rich and well-rounded with a mix of Syrah and Cabernet Sauvignon.

Wine is not included as part of the tour but guests are encouraged to bring their one wine or purchase wine by the glass aboard the train.

If you do bring your own wine as we did, the corkage fee for a bottle is $15.

As explained by the staff there is nearly 40,000 acres of vineyard growing different types of grapes to produce both red and white wine. But the Napa Valley is known best for Cabernet Sauvignon, Merlot, Syrah, and Zinfandel wine.

Why settle for just one type of wine when you can have two of Napa's finest wines in the same bottle?

The Napa Valley Wine Train Staff are enthusiastic about 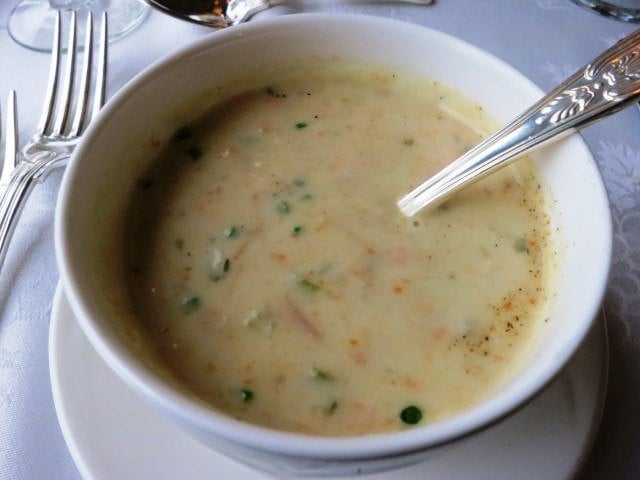 The first course, a delicious chowder. 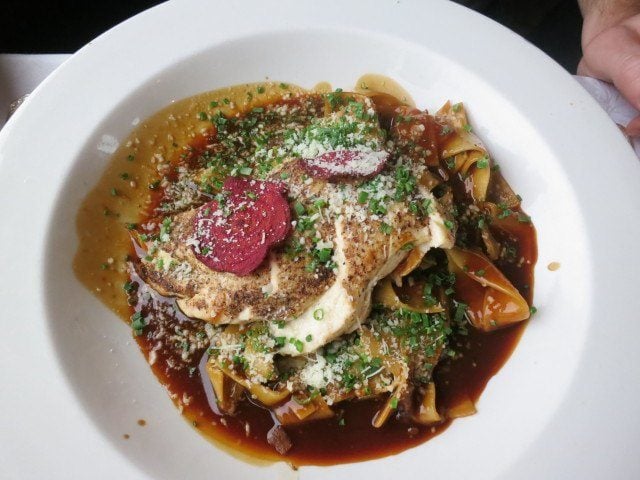 The second course, a chicken dish. The beets look like eyes. Delicious eyes. 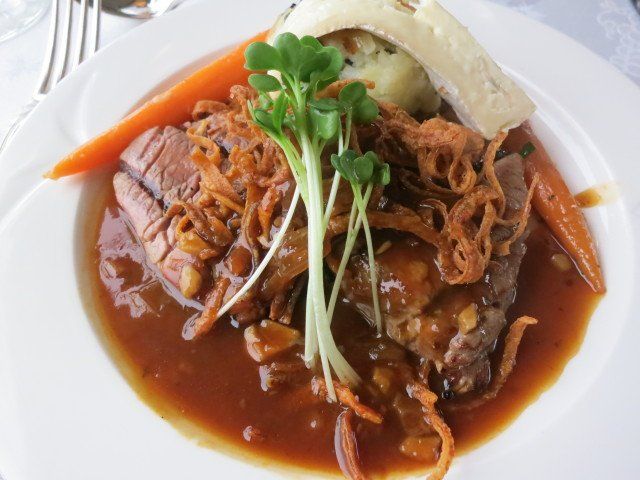 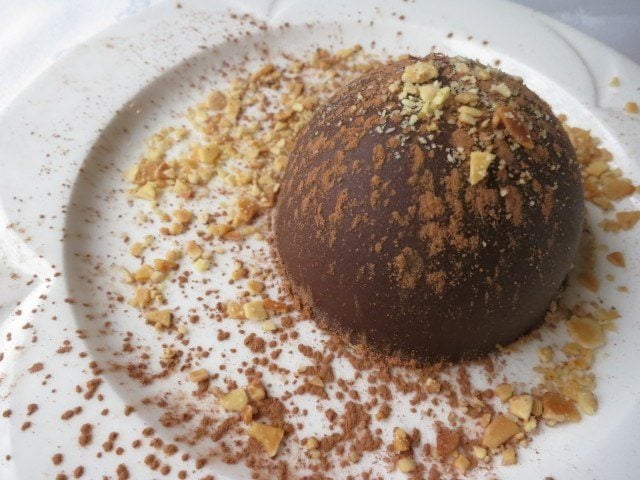 For dessert, it was chocolate goodness. It looked like somebody threw this little guy at the plate. Look at the nuts and cocoa powder left from the impact.

And here we are after the meal in the bar car of the Napa Valley Wine Train, where they have wine tastings.

As you can see, Sven has switched to red.

As you may not be able to see, the mission we set out on has been accomplished by this point.

No other California accomplishments top ours. There were the 49'ers, seeking their fortune in the rolling California hills.

There were the Chinese immigrants, who found arduous, backbreaking work on the railroads.

Then the fruit pickers who sought refuge in California's bounty during the dust bowl and the great depression.

After the war, all of the wanna-be actors and actresses first started to arrive, fleeing the new suburbia for a chance to make it big.

Then the hippies flooded San Francisco to try to practice a new (drug-induced) vision of society.

Now it’s the tech visionaries, the new Zuckerburgs', who flee to Silicon Valley to change the world, or failing that, just make more annoying iPhone apps.

But none of that compares to getting drunk on wine in Napa.

I am planning my trip to California in March! I will definitely will look into this wine train! Thank you!

I rode the wine train last May as part of a media trip to the area and absolutely loved it. The food was great and I loved the old train cars. Too bad our train rides didn't coincide! California is awesome, so I loved your words at the end of this post about it. :)

Looks like such a perfect meal! That area is so beautiful!