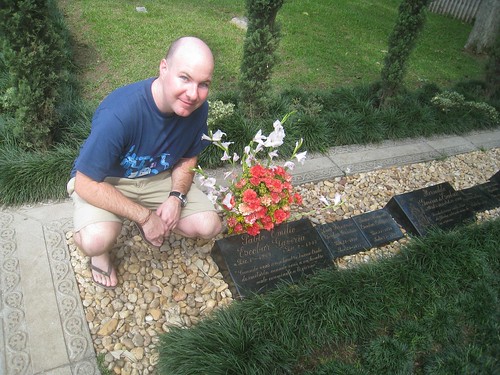 I had to visit. Pablo Escobar's influence on Medellin, Colombia, and the world of drug-trafficking was too infamous. I took the metro to Itagui, and then asked a taxi to take me to his grave at the Cemetario Jardins Montesacro. Along the way, he told me his Dad use to work for Escobar, and he made a lot of money.  I am sure it is not an uncommon story. 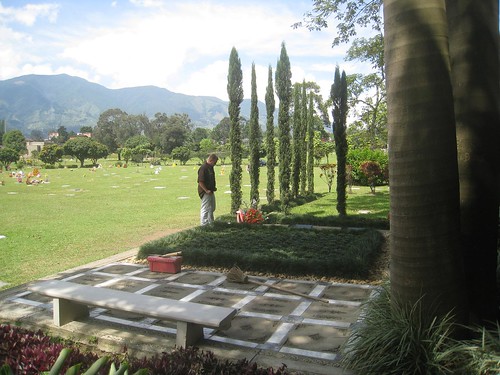 My taxi driver checks out the grave too

The taxi driver walked me the short distance to Pablo Escobar's grave. He is buried alongside his parents and a few children in a well-maintained site. It was another beautiful Medellin day, and the views from and around the cemetery were idyllic. It felt strange to be taking the time to visit the grave of a man who was responsible for so much violence and death.

In 1989, Forbes listed him as the 7th richest man in the world. He was something of a Robin Hood in Medellin, investing heavily in housing construction to win the support of the poor population. I am in dire need of an English book about his life (Killing Pablo, for example), as I have yet to find any in Colombia. 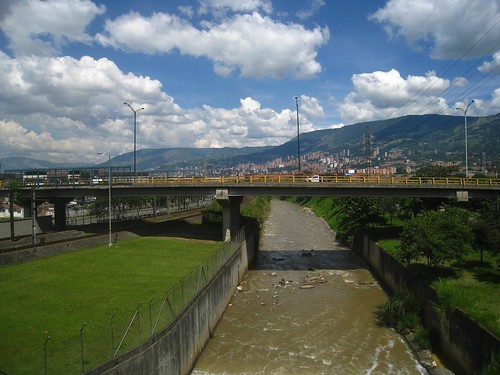 A view toward central Medellin

While I easily found the location of his grave online, finding the address where he was shot down on the roof of a safe house is proving a little more difficult. At least one hotel runs Escobar tours which take you to a number of relevant locations around Medellin such as the jail he built for himself. Outside Medellin, there is a former residence to visit as well.

In the past few years, Hollywood has taken keen interest in Escobar's life. Two films are in the works, Killing Pablo directed by Joe Carnahan (scheduled for release in 2009), and Escobar directed by Oliver Stone. And for all those Entourage fans out there, be sure to check out the mock website for Vincent Chase's depiction of Pablo Escobar in the movie Medellin.

MILLIONS continue to suffer and die imprisoned and ignored and 5 to 8000 US soldiers -REMAIN- 'missing'...

Great Escobar story and pics! I'm pretty sure it's not uncommon to find many people that were actually on his payroll.

Great Escobar story and pics! I'm pretty sure it's not uncommon to find many people that were actually on his payroll.

Your post made me wikipedia Escobar to find out more...very neat. And good luck finding the shot where he was shot - it'll be neat if you can find it!