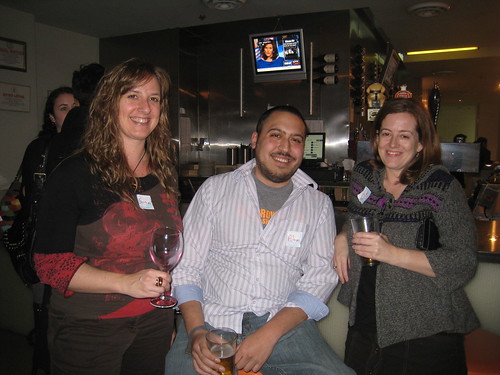 From left: Sonia, Adam, and Julia

On another crisp Winter eve, the DC travel blogging/writing community came together for drinks at Cafe Asia.

This time, I was armed with more than just my Blackberry's camera, though I learned a few people want a bright flash in their eyes at a trendy sushi bar.

Next time, Kelsey, one of the pro photographers that joined us, offered to bring her camera.

Speaking of Kelsey, she told me about a cool crowdsourcing and journalism project she's working on called The Mongolian Experiment.

I'm sure you're going to hear more about it as she ramps up, and it's just the sort of idea that reminded me of Chris Guillebeau's non-conformist approach to living and working.

Another new attendee and professional photographer was Abram, who just moved to the District from Pennsylvania.

He's looking to break out of the wedding niche and take the travel world by storm.

He reminded me of Jen Lemen, as both had been to Rwanda to take photos.

It was great to see Julia and Adam again, both of whom I met at a World Hum happy hour last Fall (which was part of the inspiration for organizing these travel tweetups).

They're a great comedy duo – bouncing playful insults off of one another like siblings.

Julia's been working as the web editor for the World Bank while Adam continues to represent Lonely Planet on the guidebook front.

Sonia was there, and she may very well have been the first person I met through Couchsurfing back in 2007.

Molly was there again, and very excited for the upcoming launch of my new membership site, Travel Blog Success (Feb 1).

And Derek was all aglow with his future plans to leave on a 12-month trip around the world in the Spring.

Sandi was struggling a bit with the idea of heading down a completely different path to join him, so I made sure to encourage her!

Thanks to everyone for coming out and making this another great event.

And a special thanks to Sisarina for the unique Twitter nametags.

We'll keep you posted on the next one in late February!