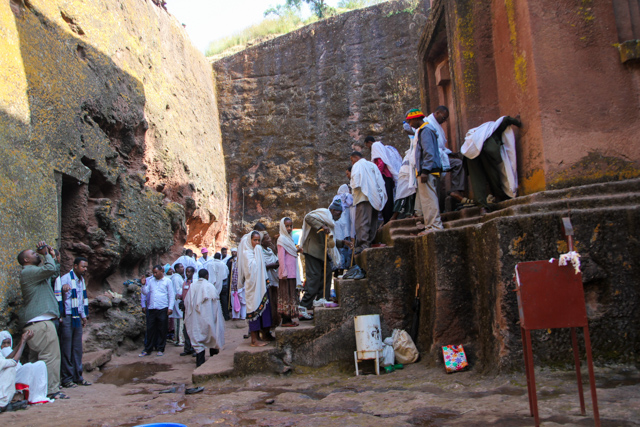 [L]alibela, a small town in northern Ethiopia, is one of the holiest and most respected towns in the country.

When I traveled to Ethiopia I wasn't sure I was going to be able to visit – the flights available online were expensive and the bus system could take two days to get there from Addis Ababa.

But while I was walking around Addis Ababa one day, I saw the Ethiopian Airlines office, and thought I'd stop in.

They offered a pretty good rate, so with no plans we bought tickets and left the next day to see Lalibela (by the way, they often have the best deals in person, so once you're in Addis, go to Ethiopian Airlines to buy a ticket to Lalibela directly if you're interested).

Lalibela is one of the most culturally and religious significant towns in Ethiopia; It's one of the major pilgrimage destinations for Ethiopian Orthodox Christian followers.

The town is known as the New Jerusalem, and King Lalibela, who ruled Ethiopia during the 12th and 13th centuries, is said to have designed the city as a way to preserve Jerusalem while it was being overtaken by Muslims in 1187.

The ancient urban planning of Lalibela is arranged symbolically as Jerusalem, with even a man-made version of the River Jordan.

The most impressive part of visiting Lalibela is touring the incredible monolithic churches. The most remarkable part about the series of churches is that they are carved into the rock, hollowed out from the outside in. 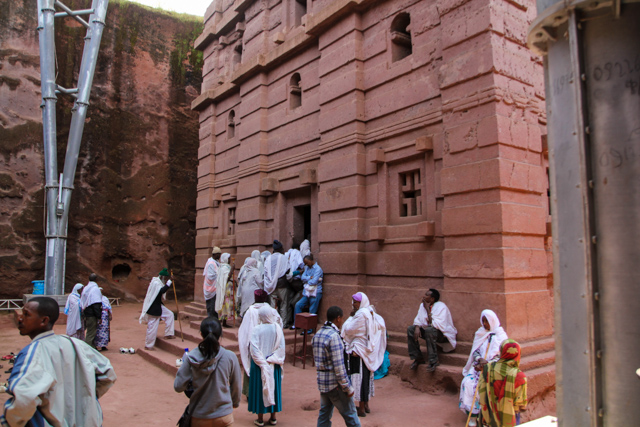 Overall, there are 11 main churches in Lalibela, and together they are a UNESCO World Heritage site.

The two main clusters of churches are the Northern and Eastern groups, and finally there's a solo church (more info below), which I think is by far the most well-preserved and impressive.

It's best to arrive to the churches in the early morning, and you first need to purchase your ticket, which costs a pretty steep $50 – but I thought the price was worth it.

It's also recommended to hire a local guide, who you can either arrange from the ticket entrance office, or usually from your hotel. A guide not only helps lead you around, but can also be a great source of knowledge. 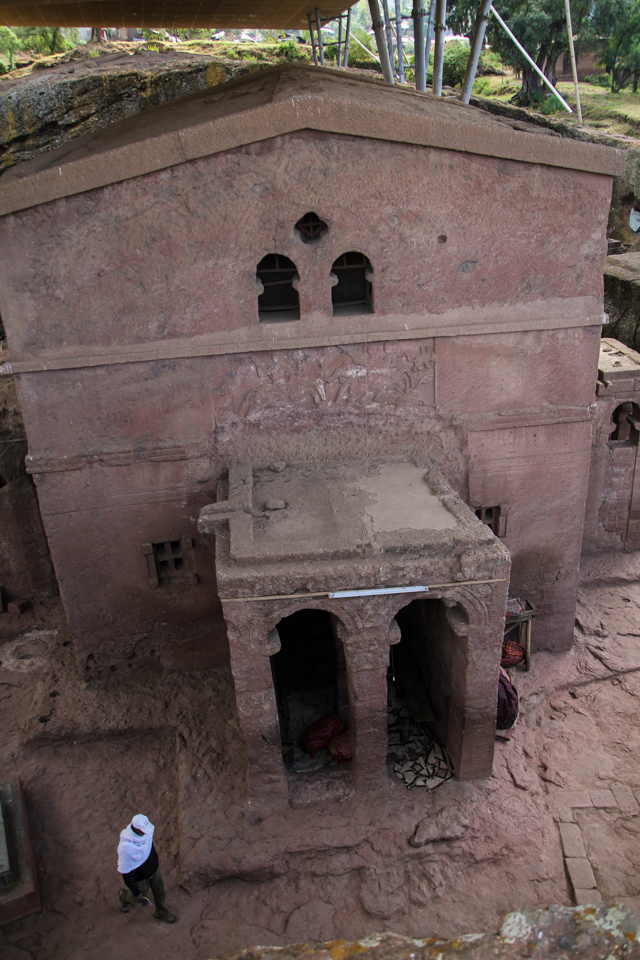 Once you have your ticket, you can then walk around any of the 11 churches.

Imagine your house as a solid boulder, and then taking a hammer and chisel and hollowing out the insides, carving it out chip by chip across the ceiling. 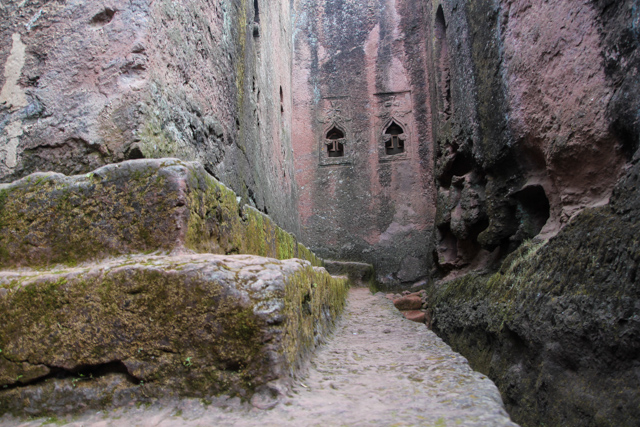 Our guide made sure to explain in detail, about all the little symbols and decorations within the churches. The windows were particularly interesting, many of them with different meanings. 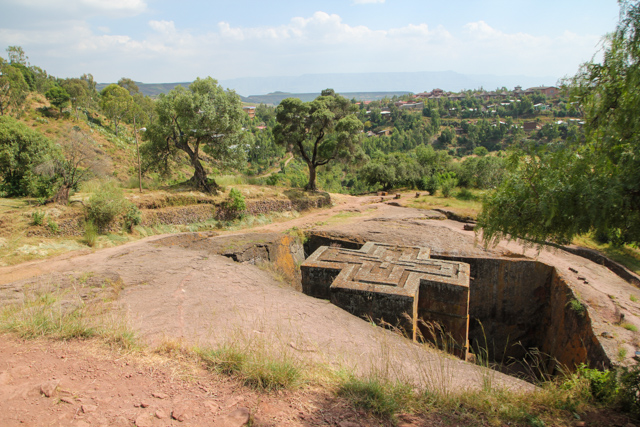 Though all the churches at Lalibela were great to see, by far the most amazing, and most well-preserved was the Church of Saint George.

Situated by itself, within a huge volcanic rock, the church was carved in the shape of a Lalibela cross. To get inside, you have to navigate your way down a rock-cut alleyway that wraps around the church, with a gradual slope that eventually reaches the bottom.

At the base of the Church of Saint George there is a small baptismal pool of water that is considered holy water. On the sides of the rock walls are small hand carved caves where priests and others sometimes sleep or spend time.

The Church of Saint George was absolutely incredible; Some call it the 8th man-made wonder of the world. 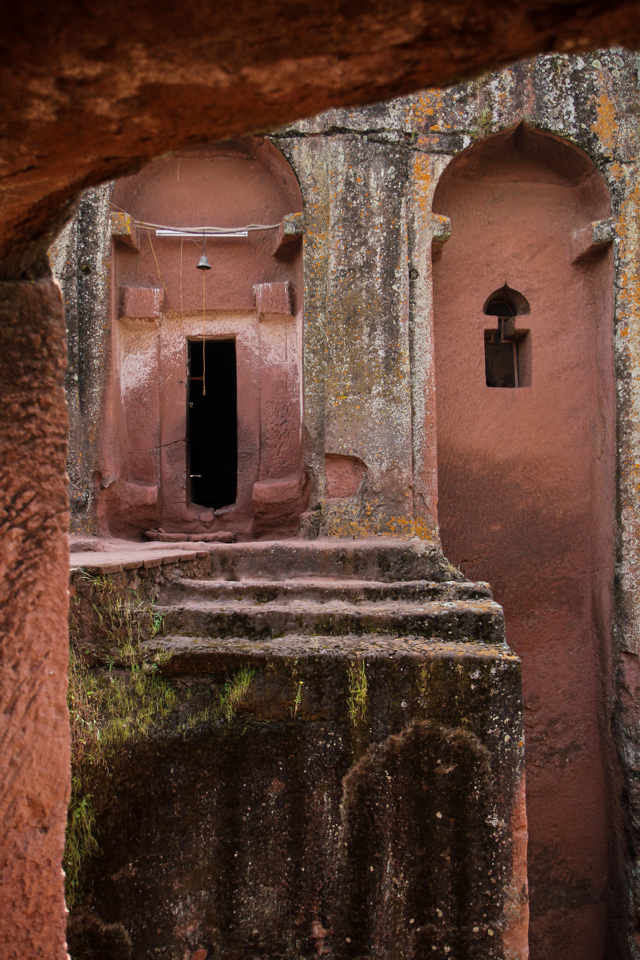 While I'm personally not a huge fan of visiting indoor museums when I travel, I really appreciate hands-on history, and I especially enjoy historical landmarks that are still being used.

The churches of Lalibela are not only impressive to visit, but the town and churches are an important and sacred destination for many Ethiopians.

Yeah those churches were definitely interesting when I visited there last year for the second time. I love backpacking around Ethiopia, such a diverse country.

What an amazing backstory with respect to Christianity ... many people would never figure this place to have such a rich history, given that they associate this place with the famine of the 80's!

I've always wanted to go to Lalibela but the online flight prices put me off ($300+ per person from Addis Ababa round trip).

In-person, what were the approximate pricing roundtrip from Addis Ababa?

Such a fascinating place! I remember seeing an episode of Globe Trekker about 10 year ago on Lalibela and after watching it, instantly put it on my mental to see list. Still haven;t made it there but I will one day. Great to read your tips and experiences.