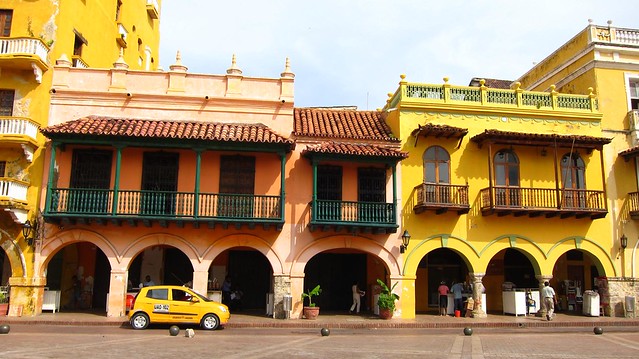 A Colombian taxi awaits its next customer in Cartagena.

For over two years, I've chosen to highlight the positive, fun side of living in Colombia on my other blog, Medellin Living.

However, after being robbed a few weeks ago, in broad daylight on a busy street, I'm taking my personal security more seriously than ever before.

Being robbed at gunpoint will do that to any man or woman, and to not share what I've learned from the experience would be a waste of the anxiety and fright that resulted.

There are countless strategies the bad guys use in Latin America to separate targets from their wealth.

These are a collection of tips from Colombian taxi drivers I've been given since sharing my story with them.

While I still don't think it's practical to adhere to every tip 100% of the time, I will no longer be so lackadaisical when taking taxis in foreign countries.

1.  Do not hail taxis from the street, call in advance.

Some taxi drivers may be working in partnership with the thieves who rob you.

Upon spotting something of value on your person, be it an expensive phone, jewelry, or camera, they call the thief to report your route.

Because the thieves know the license plate, they can easily identify in which taxi you're traveling and wait for you to reach a stoplight or turn down a deserted road so they can execute their theft.

Drivers working for taxi services are more trusted by Colombians.

If you're living abroad for a few months or more, you should build relationships with a few trusted drivers who work various hours of the day.

This allows you to have a trusted driver on demand 24 hours a day, 7 days a week.

If you rely on taxis to get around, this makes a lot more sense than taking the risk of riding with a random driver every time (even though 99.99% of the taxis rides I've taken in Colombia have been without incident).

The downside is you have to be more patient then if you hailed the next available taxi driving down the street.

Also, sometimes taxis don't show up when scheduled, resulting in time wasted while you wait for another one.

I believe the logic with this tip is that you're less visible, and less accessible since you're able to sit in the middle seat or move to the opposite side should a thief approach you.

The downside is it's harder to have a conversation with the driver, especially if your Spanish is weak.

And, the view isn't as nice as what you get from the front seat.

3. Do not ride with the windows rolled down, keep them up or slightly cracked.

Thieves are looking for easy targets.

By making little changes to the way you ride in a taxi, you signal it'd be easier for them to target someone else.

Keeping the window rolled up may seem like a small thing to do from your perspective, but think of it from the thief's angle for a moment.

He has 30 seconds, 60 seconds max to execute the robbery at a stoplight, therefore every second counts.

If he's wasting time waiting for you to roll down your window, it increases the chances that the light will turn green before he's taken everything he wants, or that someone (such as a passing police motorbike) will notice what's happening and intervene.

The obvious downside is the lack of fresh air, which is especially appreciated in a city like Medellin with its constant Spring-like temperatures.

4. Do not show evidence of valuables, keep your expensive phone in your pocket or purse.

This was a piece of advice I read a while ago but didn't take seriously.

The more taxis I took without incident, the less it seemed to matter.

I used my Blackberry for email and messaging, so it'd often be in my lap, not held up to my ear where it could easily be snatched from a passing motorist.

That is until I became a victim of armed robbery.

It was the second Blackberry I've had stolen in the city in the last 11 months, and I'm in no rush to buy a new one.

The downside to having a nice phone, or expensive jewelry, in a developing nation is the bigger target it puts on your back. This goes for Colombians as much as it does for foreigners.

I may have been targeted simply because I was in the wrong place at the wrong time (and my skin is white), but it's also possible they saw the Blackberry in my lap and tailed us until we reached a stoplight.

If you do find yourself in the unfortunate situation of being robbed, whether or not a weapon is clearly visible, do not resist.

Whatever you've got on you is not worth your health and well being.

Sadly, life carries less value to many people in this world, and the bad guys may not hesitate to stab or shoot you to get what they want.

I repeat, if being robbed, DO NOT RESIST.

To give yourself peace of mind, consider getting travel insurance before leaving your home country.

That way if you do lose material possessions of value, you have the opportunity to be compensated.

I will no longer be so lackadaisical when taking taxis in foreign countries.""

because of course people never ever are robbed in the USA.

only in those damned foreign countries...

The point of the article is to prepare foreign tourists for the tactics used by criminals in Latin America so they can be informed and take steps to ensure their safety.

Look in any Lonely Planet guidebook ever published and you'll find a section on "local dangers" that does exactly the same thing. Because while you may be familiar with the tactics of criminals in your own city or country, chances are you'll be oblivious to them when you go somewhere else for the first time.

And frankly, if you read the second sentence you would know I was robbed while in a taxi in Colombia two weeks before I wrote the article. If I'd have been robbed in Thailand, I would've written an article about staying safe in Thailand.

My husband and I are thinking about going on a vacation next year to Latin America, and these are great tips! I never thought about calling a taxi ahead of time before. Calling a taxi before hand isn't something that I would do here in the states, and it never occurred to me that hailing a taxi in another country could lead to me getting robbed, just because that's something that hasn't happened here. If we end up going, I'm going to make sure that my husband and I find a reputable taxi company in that area. Do you know of any ways to find good taxi companies in areas you're going to be traveling in?

Ask at your hotel reception, they can either call for you or give you the number of a local company.

Hi Dave, I'm Brazilian, living in Brasília. I see this post is focused on security, but safety is also related to avoiding accidents. So: I usually take the passenger seat, because in some cities it's still common to find cars with two-point belts in the back seats; and sometimes these belts are put in a not functional way (e.g, placed under the seat), although it's mandatory to use them. @Steph: it's not so frequent, but there are female taxi drivers in some cities in Brazil. Sometimes I call one when I have to take a taxi late at night.

this is really great advice! As a single lady in big town bolivia though really one of the more frightful things I have done was take a taxi, while sick. I thought I'd just add in that unless you're a dude or clearly somebody's grandma never go into a taxi alone. I was sick, on my first week, could barely speak, much less use spanish and didn't put much thought into it. I just handed my address to the driver. The good news was he was an honorable driver (despite not having a radio, having a radio and a nicer taxi normally means legit down here) and a compassionate man. Lesson learned all the same though, look for a nicer car that has a radio in it, don't go alone if a female, and if possible take a bus. The buses down here are really reliable and are mostly taken by students/ old people/ people with kids. I still keep an eye on my bag but chances are you are more likely going to find yourself squished between an elderly person and a just some 40 year old sweaty guy finally off work than someone who truely wants to rob you.