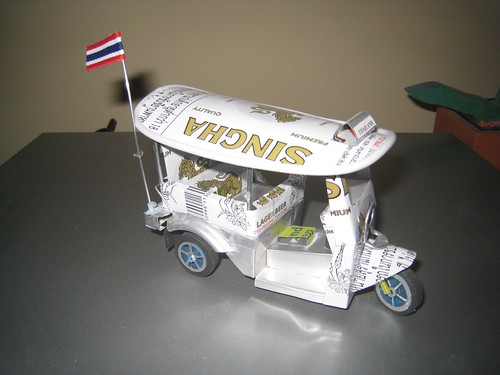 We've all done it – bought the souvenir from abroad, which once opened at home, results in thoughts like “what the hell was I thinking?”

For me, nothing came remotely close to topping the Thai tuk-tuk carefully crafted out of a Singha beer can.

I'm going to attempt to dissect, for your amusement, how I could end up buying such a souvenir, and massively overpaying for it to boot. 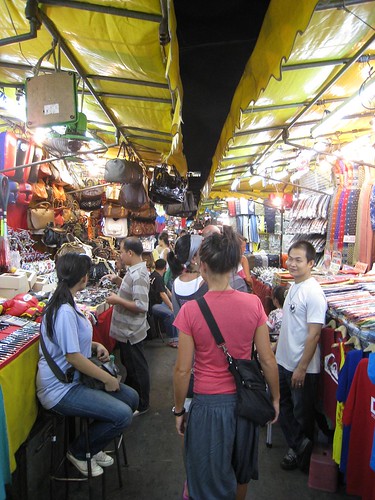 Bangkok's Khao San Road is filled to the brim with souvenir stalls.  It is impossible to see every t-shirt design, let alone every form of cheap souvenir on offer, regardless of how many times you visit.

After several months of island-hopping in the south, I returned to the capital with the company of two new Canadian girl friends, Josie and Catherine.

It was their first time in the city, and like most women, they loved to shop!

One night, we took a taxi to a night market situated within a red light district.

According to Lonely Planet, the market had become more of a tourist draw than the strip clubs.

First, we ate dinner at a restaurant across the street, and then we stormed the market.

Not surprisingly, it it was stocked with much of the same cheap stuff found on Khao San Road.

I came across a few small magic tricks and began playing around with them, wondering if I could manage to master each if I actually bought them.

When I asked the guy for the price of a few, he threw out a figure so high, it was worthy of a laugh.

I knew the tricks were probably worth one tenth of his suggested price, but didn't yet have the faith in my bargaining skills to get him so far down. I walked away.

Then, I came across the Thai beer can tuk-tuk and thought it was the coolest thing!

A souvenir that could remind me of my favorite Southeast Asian beer AND the colorful Thai tuk-tuks. The perfect combination, I thought.

Upon asking the price of such a fine piece of art, the man responded with a figure in the area of $20.

Ha! What does this guy take me for, a fool? It was a cheap piece of aluminum – weighed next to nothing, sculpted out of a beer can.

I countered his offer, probably throwing out a figure close to $5 (which was still too much). He detested, and knocked some Baht off his original price, leaving it still far too high.

I fondled the tuk-tuk again, as though the more I felt it up, the more I would be convinced that it was a wise and worthy investment for reminiscing about Thailand once home.

I threw out another amount, and the guy again detested. Tiring of the negotiation process, as usual, I agreed on his rate.

I think I paid about $14.  t seemed like a lot, but I did bargain, and it did come with a sturdy cardboard box to protect it from being shipped half way around the world. How considerate!

The next morning, walking from the hostel to Khao San Road with Josie and Catherine, we passed by a sidewalk display of 50-100 Thai beer can tuk-tuks.

So you like to "ride the elephant" as a German guy I met liked to say? :)

So you like to "ride the elephant" as a German guy I met liked to say? :)

This is brilliant!! Wish I would have seen that the last time I was in BKK. I wonder if they do a Chang version? A much better beer in my opinion :)

Given the amount of time you'll be traveling, I can't imagine you won't buy something you'll later deem silly back at home. :)

Dave, that is a great funny short story. I wonder how many times I have over paid for local gifts to bring back home.