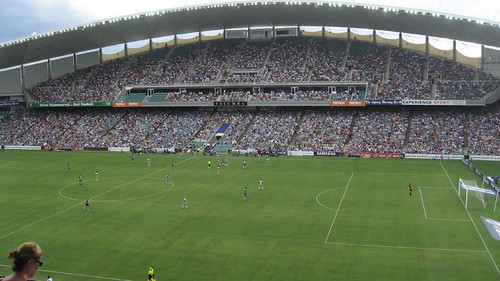 I caught a glimpse of the Australian A-League soccer schedule when I was couchsurfing with Ben in Brisbane. I had noticed Sydney FC had a home game around the time I'd be there so I picked a flight from Cairns that would give me a fighting chance to see it live.

After checking into Original Backpackers in the King's Cross area of Sydney, I decided to hurry my way over to Aussie Stadium for the match. I waited in a special events bus queue that got me to the stadium (adjacent to the cricket grounds), and then another 20 minutes under the blazing sun to get tickets (about $25 USD).

My seating area was general admission which worked out fine even though I was late. Sydney scored within the 10-minute mark. Melbourne answered back, and a tit-for-tat resulted in a 2-2 tie. Sydney had already clinched a playoff spot (there are only 8 teams in the 3-year old league, with the top 4 going to the semifinals). The skill level was comparable to Major League Soccer, though the crowd was much larger. They had a regular season record 33,000 in attendance. 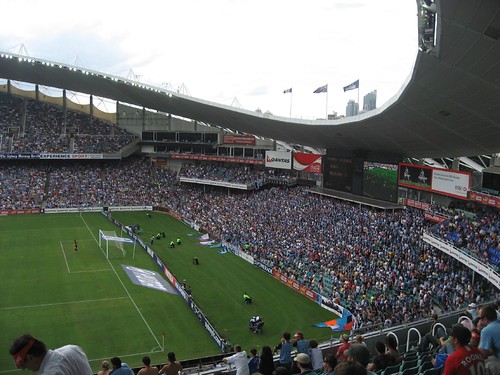 The Sydney fans covered the entire section behind the goal in the photo above. Melbourne had a smaller, though quite vocal, showing at the opposite end. Every time a goal was scored, signal flares and smoke bombs were lit. The security would then jump into the stands and remove the flares. Sydney supporters had some big flags, and most were dressed in their team's light blue jersey. It reminded me of going to DC United games at home.