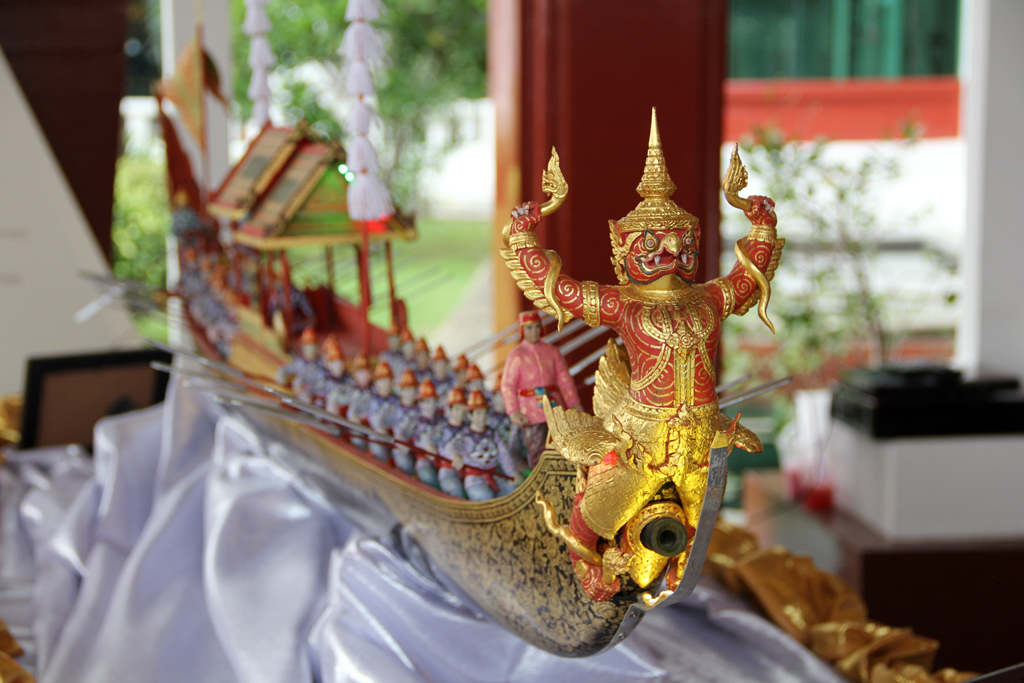 Display at the Thai Royal Navy

[T]he Thai Royal Barge Procession is a celebration that occurs just once every 5 – 6 years.

The history of the boat procession dates back to the 14th century during the Ayuthaya Period of the Kingdom.

The Royal barges, as you'll see in the photos below, are elaborately designed and impressive to see.

The Chao Phraya River, which is normally bustling with boats and ferry traffic, came to a complete halt as the parade of boats sliced through the glassy top of Bangkok's central water vein. 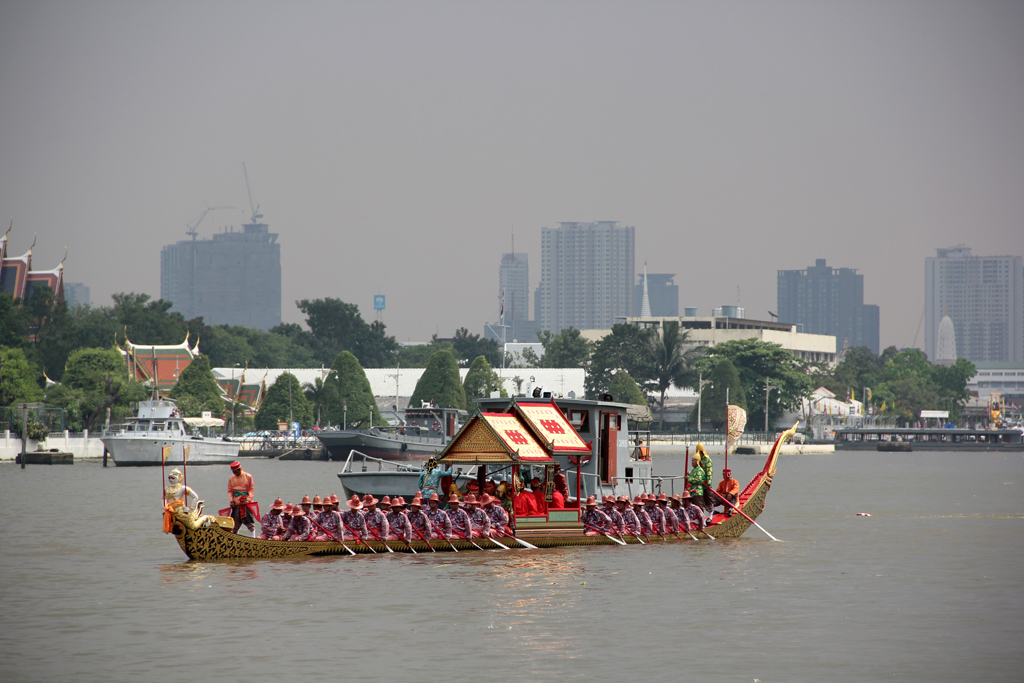 Paddling upstream prior to the procession

Prior to the official procession, I was able to see a few of the barges make their way up stream to the starting point. 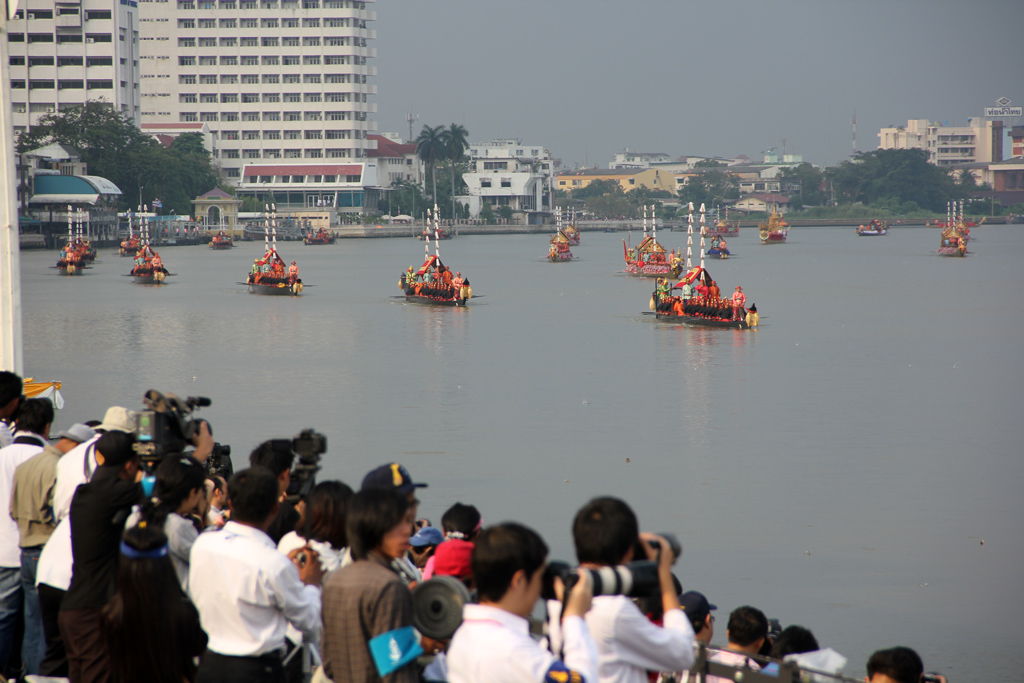 I wasn't the only one there to catch a piece of the ceremony; I was surrounded by numerous other photographers, making my camera lens look wimpy in comparison. 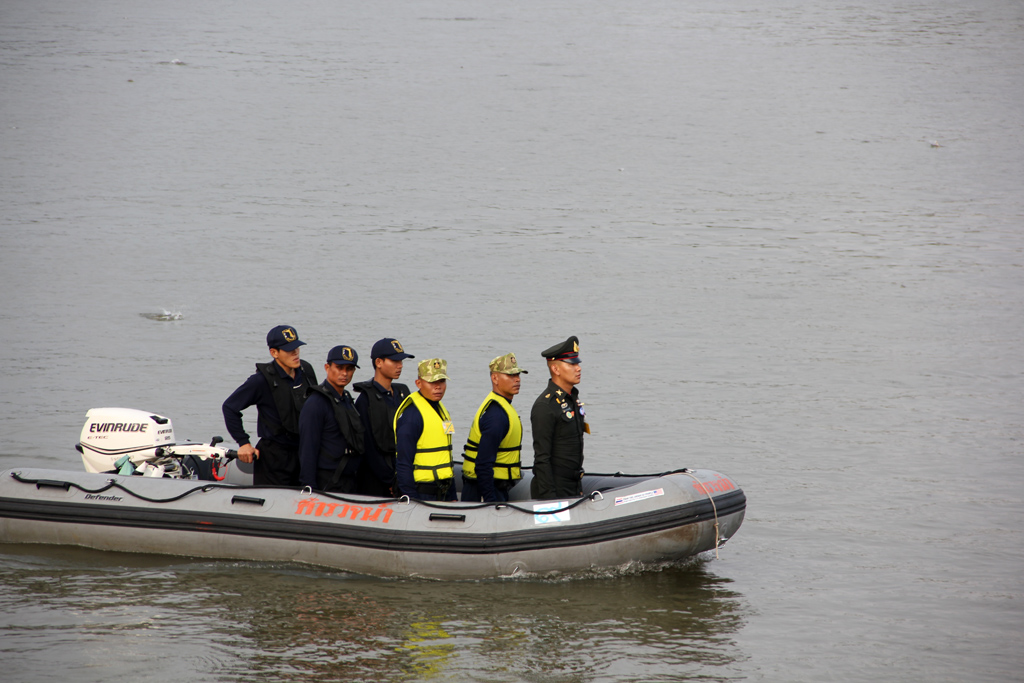 The Chao Phraya River was heavily patrolled by police and navy crews, keeping the waters safe and clear. 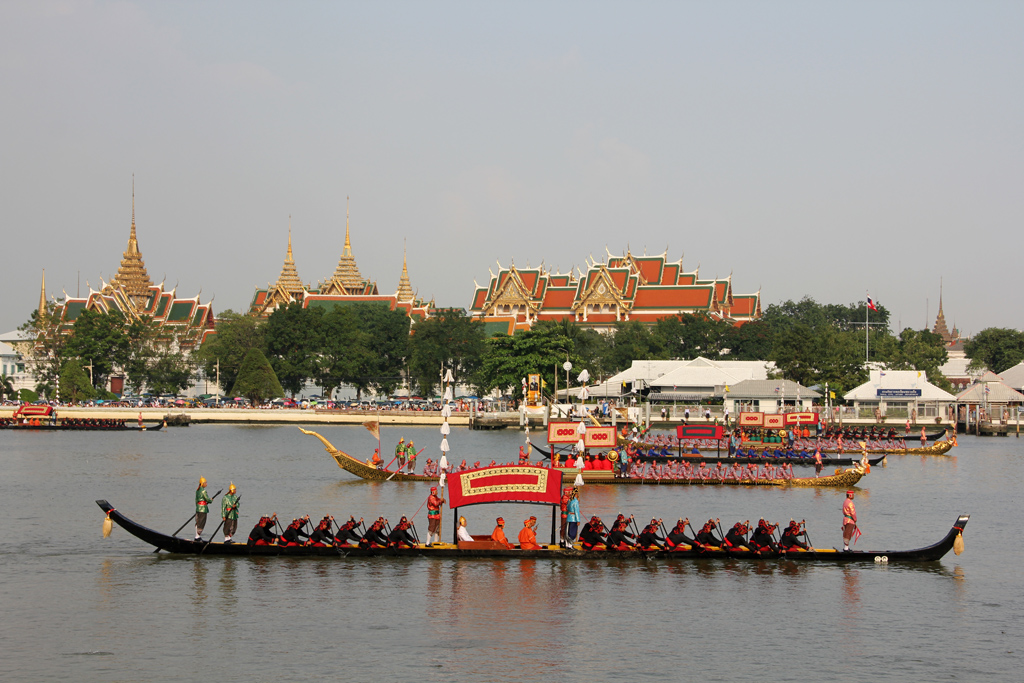 Royal Barges with the Grand Palace in the background

Being positioned directly across the river from Bangkok's Grand Palace, made the entire scene even more beautiful. 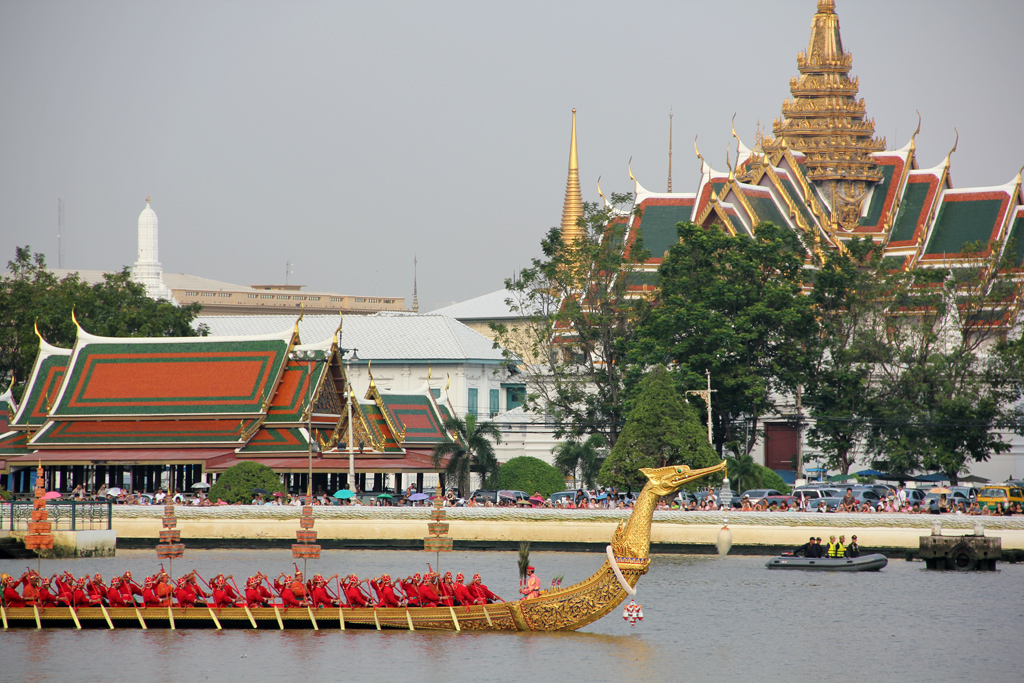 It was the Royal Barge Suphannahong that left me the most impressed.

This pure teak wood “golden swan,” with a crystal ball hanging from its mouth, is 44.9 meters long and was rowed by 50 oarsmen. 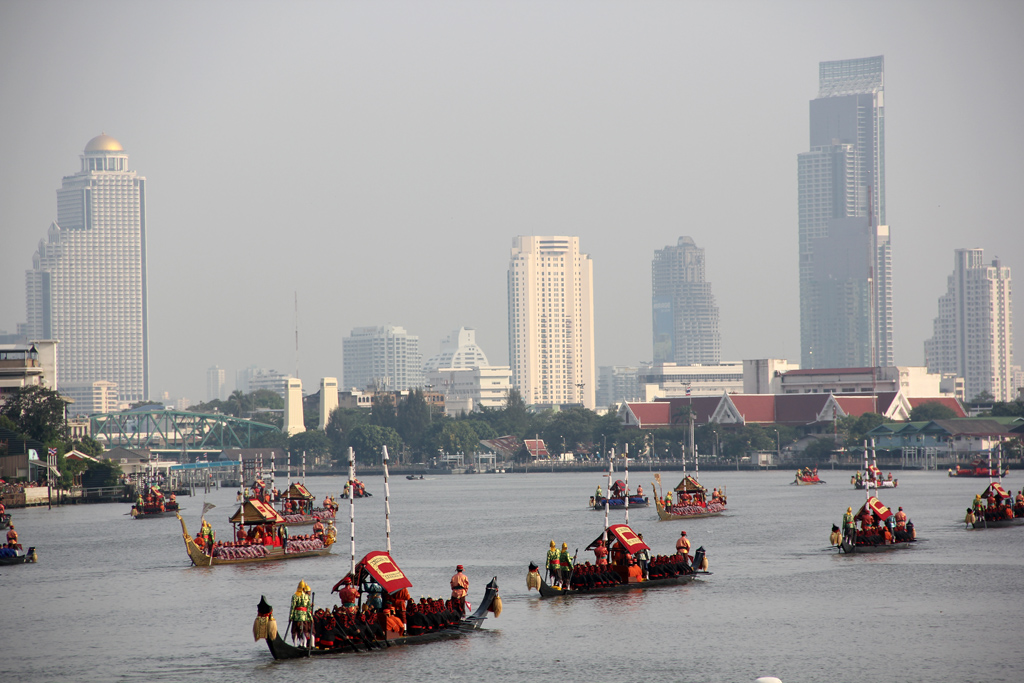 The barges gliding through Bangkok

Along with the spectacular scenery, each of the oarsmen peacefully chanted a tune that was composed for the procession.

The eerie chant paired with the legendary barges floating in perfect formation created a magical atmosphere.

If you'd like to see the full experience and hear the chanting, here's a video. 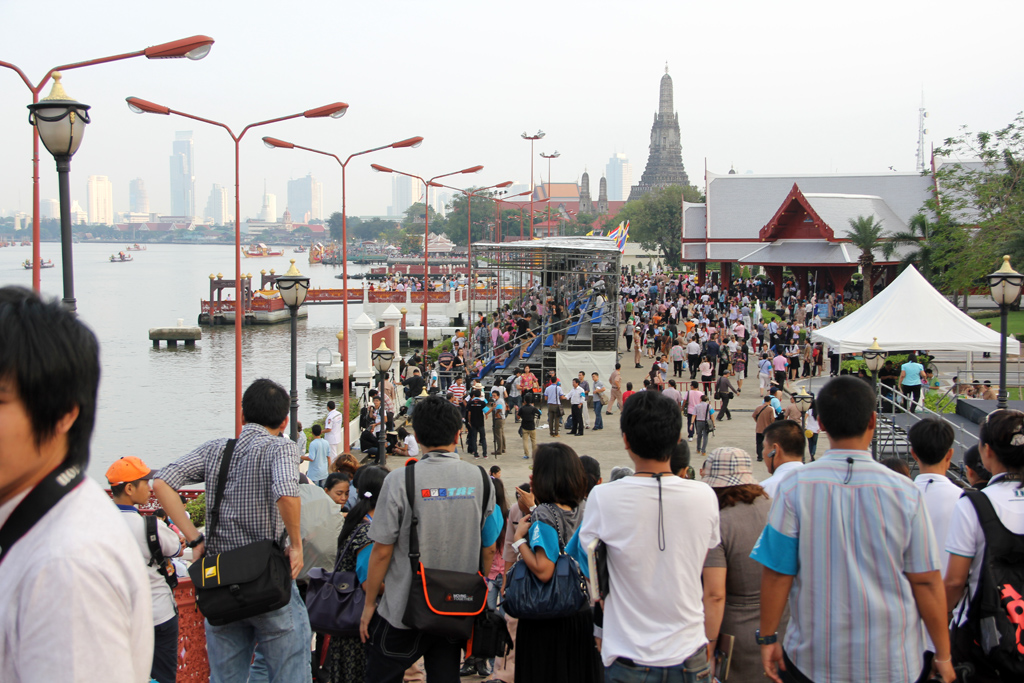 The procession is finished!

After just 15 minutes, the barges had fully passed and the event was over. 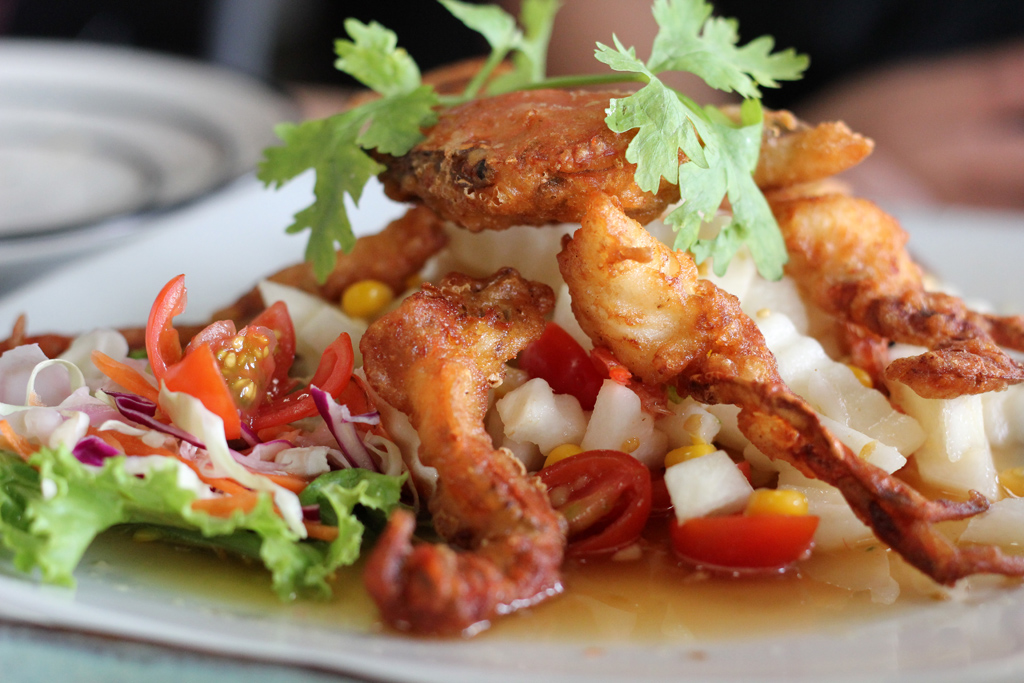 And finally, any event or celebration in Thailand always includes food.

This soft shell crab which was deep fried, laying on a bed of jicama, and drizzled in sweet tangy sauce, was melt-in-your-mouth delicious.

It was an honor to attend the Thai Royal Barge Procession and it was one of the most memorable events I've seen in Bangkok.