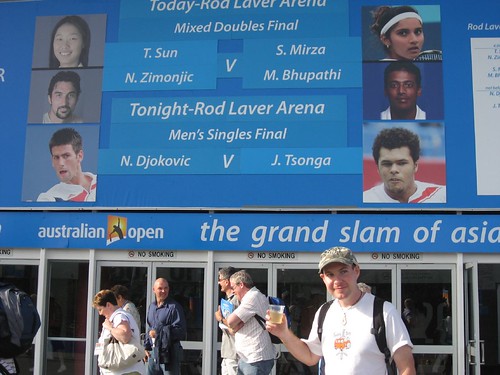 I booked my departure flight from Australia out of Melbourne for the end of January because it seemed like a noteworthy city to visit. It was only after talking to my tennis fiend of a friend (code name – Sup2dresq) before leaving that I learned my travels would offer me the opportunity to attend the 2008 Australian Open, one of the four major tennis tournaments of the year. 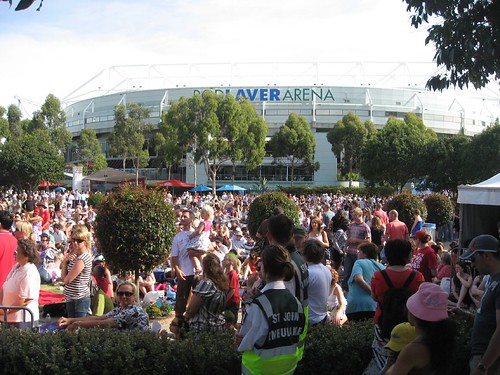 In fact, my friend offered to cover the cost of a Grounds Pass to ensure I got myself to Rod Laver stadium for the men's singles final. My hostel was close enough to the tennis complex that I could walk to get there. I headed to the stadium a few hours before the 7:30pm start time so I could do a little exploring. I wasn't alone, as the best spots for watching the match on the jumbo screen outside the stadium were already taken up by people on blankets and plastic chairs. A band was entertaining them on a small stage. 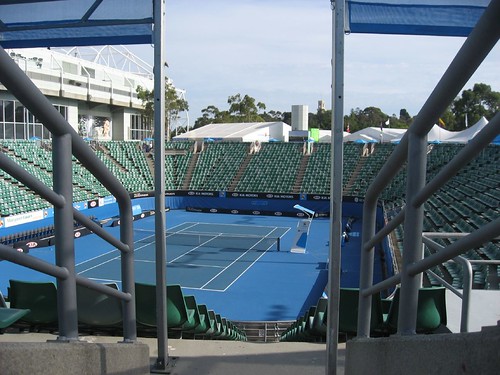 As I walked around the grounds, peering into the locked gates of smaller tennis courts, I realized how much fun it would've been to have caught earlier matches. Even in the early rounds, the best players would be in the Rod Laver and Vodafone stadiums, costing more to see, however the air would be electric with the various fan favorites still alive and in the running (mine being American Andy Roddick). 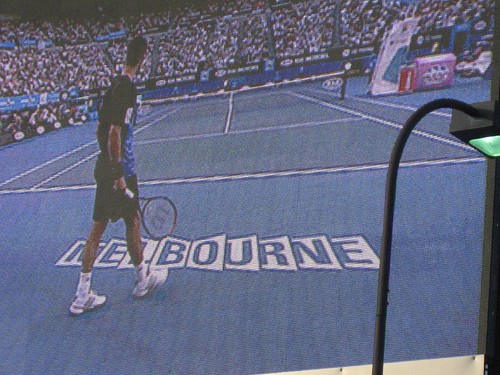 Eventually, I settled into a spot behind the footpath directly in front of the jumbo screen. Once the band stopped, lots of plastic chairs became available and I instantly upgraded myself from asphalt to plastic. Once situated, I queued up for some overpriced sushi and Jacob's Creek white wine. 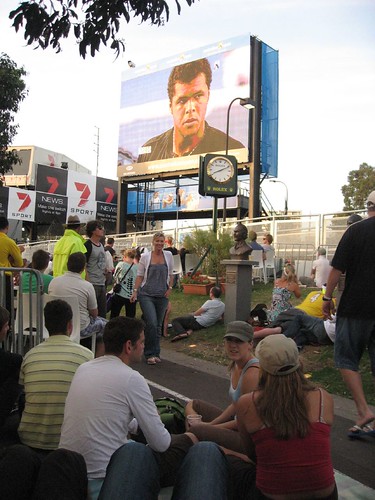 The fan favorite seemed to be Tsonga from France, though there was no shortage of Serbian supporters and flags for Djokovic. Considering he beat the world's #1 player for the past few years (R. Federer) and the #2 player to reach the finals, he seemed to be hands-down favorite to win the tournament. 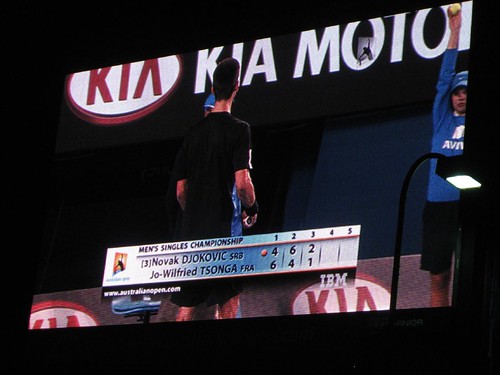 A beautiful sunset transitioned the environment from day to night, and try as they might to support Tsonga, it just wasn't his match to win. After taking the first set, he fell in the next three with the 4th set tie-break providing palpable moments of tension. By then, I had abandoned my front row seat for a little cool air in the stadium. The inside was plastered with plasma screen TV's so you wouldn't miss a point while getting refreshments. The only catch was if you had a stadium seat, you couldn't go back in while play was occurring.

After the match concluded, I walked back to Federation Square, a few blocks from my hostel. It was packed with people who had watched the match on the jumbo screen there. As I walked by, Djokovic was triumphantly accepting his trophy with an acceptance speech thanking all the Serbian supporters.

Well played Djokovic, and special thanks to Sup2dresq for helping me to experience my first tennis tournament!

What I dont comprehend is how youre not even a great deal much more popular than you might be now. Youre just so intelligent. You know so substantially about this subject, developed me consider it from so many diverse angles. Its like men and women arent interested unless it has some factor to accomplish with Lady Gaga! Your stuffs wonderful. Continue to preserve it up!

Glad to hear you enjoyed the Tennis in Melbourne. I missed it unfortunately :-(

Glad to hear you enjoyed the Tennis in Melbourne. I missed it unfortunately :-(

I hope to read more of my beloved Melbourne :)

stu - i had to cut melbourne short so i could start to catch up with bali - i hope you can understand! i did enjoy my time there though - great skylines and architecture.

I hope to read more of my beloved Melbourne :)

stu - i had to cut melbourne short so i could start to catch up with bali - i hope you can understand! i did enjoy my time there though - great skylines and architecture.