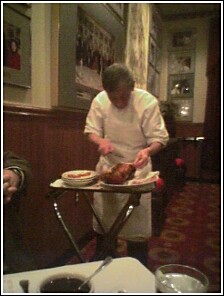 It's ironic that I've seen a ton of reality shows, yet I have always passed up the one about international travel where the contestants carry all their stuff all on their backs.

The only reason I decided to start watching this all-star season is that I got to know Rob and Amber, a popular married couple who have been on Survivor, through another show they shot last year.

Ok, I admit that I mostly watch for Amber because she's hot! Rob makes a good sidekick.

At any rate, they came in first on the leg last shown last night from Miami to Ecuador.

I can appreciate their competitiveness and think I'm in for the full race.

The Peking duck was enjoyed at Peking Gourmet Inn, a Chinese restaurant frequented by Presidents Bush Sr, Bush Jr, the Clintons, and tons of other politicians and foreign leaders.

You can tell because there are a few hundred framed and signed photos on the wall, taken with the restaurant owners.

It's located in northern Virginia, about five miles from me. I went out with my parents for the Chinese New Year.

The place was packed, and as we were leaving around 7 pm, about 20+ people were weaving along the tight hall and lobby all the way out the front door.

I had a chef's special, the garlic sprouts with chicken and rice.

The Peking duck was my parent's dinner, of which I partook of course.

I also used the occasion to let my parents know I wanted to move in with them this November, during the few weeks after my apartment lease is up, and before I leave for New Zealand.