It's a new day
But it all feels old
It's a good life,
That's what I'm told
But everything, it all just feels the same

Good Charlotte's opening lyrics to The Anthem ring in my head from time to time. Very catchy stuff, if not a bit hackneyed.

Then again, tons of punk bands have their own “anthem” songs. It rings true though, and I could and still can identify.

I was exposed to punk rock in my early teens, after moving to New Jersey when I was 10.

My friend Jeff, in particular, exposed me to the good stuff – The Dead Kennedys, Slayer, and NWA.

I found others on my own, such as Suicidal Tendencies and Sex Pistols. It definitely helped shape my attitudes about conforming vs rebelling.

I was interviewed by Wendy Reiger of the Washington, DC NBC news affiliate last Fall for a story she was doing on people who leave their career and travel long term.

The angle was that backpacking is often thought of as something that is done when you're young, in your early or mid-'20s, before getting immersed in a career, family, house, etc.

Well, I've got my career, however, I'm far from a serious relationship, and probably wouldn't seek one out given I've set this travel goal for myself and want it too much to be diverted now. 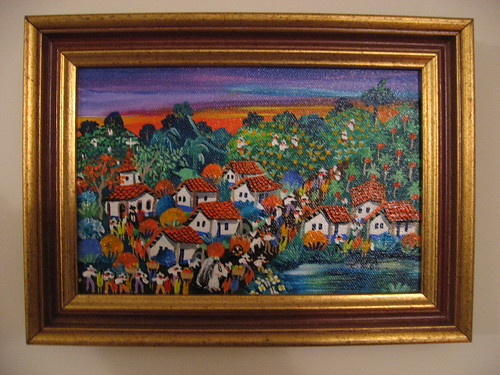 I bought this painting in one of the many art galleries in San Jose, Costa Rica in May 2005.

“Go to college,
A university
Get a real job”
That's what they say to me
But I could never live the way they want
I'm gonna get by
And just do my time
Out of step while
They all get in line
I'm just a Minor Threat so pay no mind