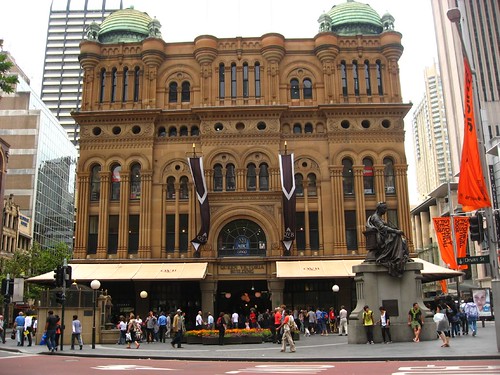 After catching a bit of sport at the soccer match, I spent the following day around the Darling Harbor area of Sydney.

The first stop was the Queen Victoria Building which I ran into almost as soon as I got off the train.

Normally a shopping mall wouldn't be a must-see for me, however, the exterior design drew me in and I found the interior to be even cooler with its mosaic floors.

I grabbed a cup of cappuccino and watched well-dressed women with designer bags walk past ridiculously expensive stores. 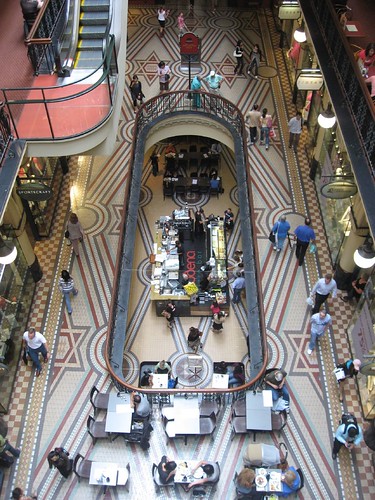 After the mall, I headed to the harbor. The overcast skies soon rained down on me. 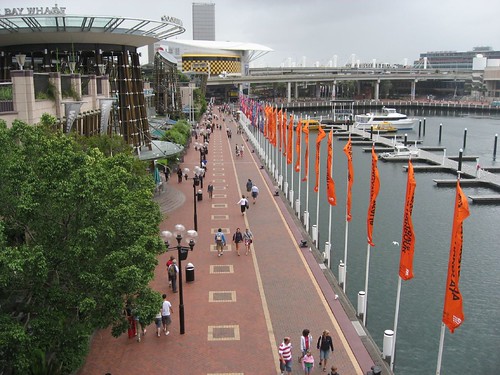 There were orange flags throughout the downtown area as Australia Day was quickly approaching.

It's a national holiday to celebrate the founding of Australia by Europeans and seems to be akin to America's July 4th.

Basically, it's an excuse to have a BBQ, beer, and a 3-day weekend. 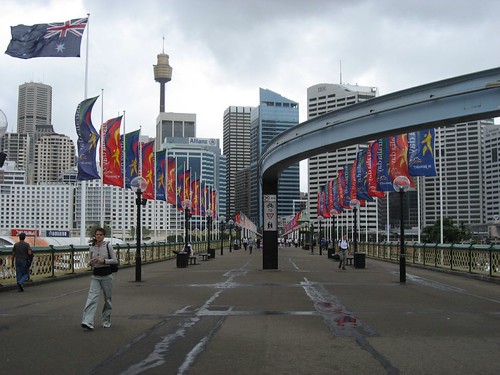 I finished my afternoon's stroll with a walk through Chinatown.

Paddy's Markets were closed, and I wouldn't make it back to them. It's an Irish-themed street market with lots of cheap goods.

After 24 hours in Sydney, I started to feel like I could be in the United States. It felt comfortable.

The transit system was extensive, yet the information was well communicated.

I was impressed by the LCD screens in the train stops which seemed light years ahead of the LED displays we just recently got in Washington, DC. 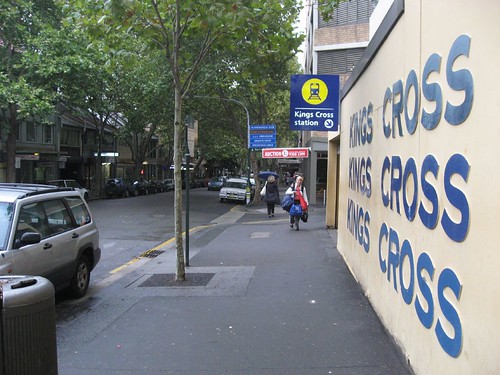 In the evening, I went out with some people from my hostel to Scubar.

Our hostel had an entertainment guide whose job it was to take backpackers out to a different bar each night with the promise of a free drink.

I think it's a way to welcome all the foreigners who come to Sydney and Australia with the intention to stick around and work.

Scubar was a basement bar frequented by backpackers, and it was a mess of drunken people.

Somehow I managed to enjoy it for a few beers before heading back to home base – King's Cross.

It is someone else. I know what you mean - and the English influence is all over the world!

Is that you or someone else in a backpack in your King's Cross picture?

When I stayed in London, I stayed at the King's Cross Backpacker's. I always love to follow as names jump continents and oceans as a result of colonization. Wild.

So I suppose now one could say "The sun never sets on the wild remnants of the British Empire known as city nexuses by the name of 'King's Cross'" :wink:

Dave this is awesome! I use my lunch break at work to catch up on your travels. Makes me feel like I am some place other than work. :grin: Keep up the good work!

Thanks Karl - good to hear from you! Bali is fantastic and I can't wait to catch you all up on it. :)