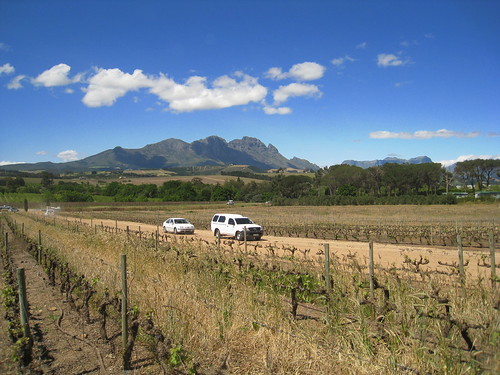 I awoke early to a beautiful day in South Africa. Normally it is not my style to book an activity for the day after my arrival in a country, however the girl who checked me in said there were a bunch of people already signed up for a wine tasting tour so it should be fun.

Sure enough, our van included 3 Norwegian nursing students fresh off two months of work in Namibia, 2 Indian army guys on vacation from the war-torn Democratic Republic of Congo, 2 Kiwi sisters, Dominque from San Francisco, Milena from New York City, an Israeli, and me. Our wine tasting guide for the day was Bruce, a charismatic and fun South African whose prior work included safari guide, bomb disarmament, and clown. 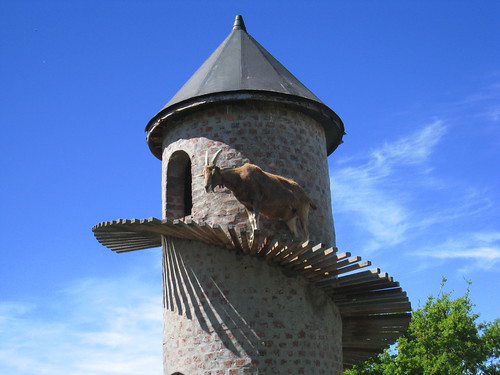 As we began to drive north toward the Stellenbosch region, everyone on the van began to socialize. The views of vineyards leading up to mountains and blue sky were wonderful. Our first winery was Fairview. In front of the main building was a goat tower, and sure enough a goat was hanging out atop it! Once inside, it became clear the goat was a mascot as it had wines named after it and t-shirts bearing its image. Bruce gave us the run down on the proper way to taste wine. I was under the impression you're suppose to spit out the wine, however he said that's only something you do if you're tasting a lot (say 50 types). We tasted our first white wine together and were then released to the bar to choose 5 more on our own. In between refills, we shuffled back and forth to the cheese counter where I discovered goat cheese dipped in balsamic glaze is heavenly. 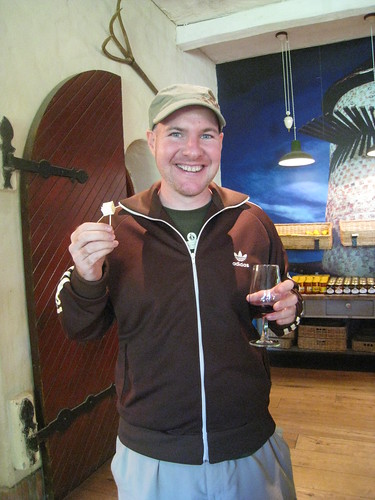 In a valiant effort to keep a schedule, Bruce rounded us up and we barreled onward to Beyerskloof for a great presentation by one of the winery staff. We tried a few reds and whites, and then we were taught the proper way to taste and drink brandy. Like wine, the process involves all of your senses except touch, and I could appreciate the flavor for the first time when shown the steps, which include the proper way to hold the glass in your hand so as to warm up the brandy and soften the bite. 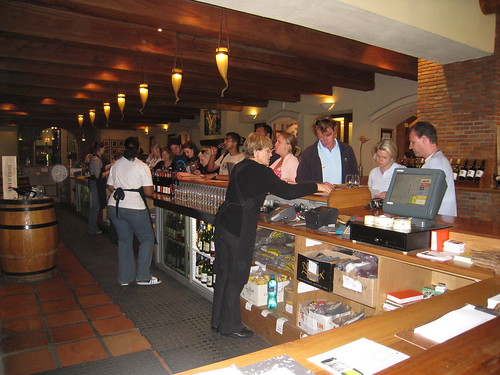 I lost track of the third winery's name (big surprise, right?). We tasted a few more wines at the bar and enjoyed a delicious lunch on the porch overlooking vineyards. Most people (including me) ordered a big cheeseburger infused with Pinotage (a South African grape/wine) and smothered in caramelized onions which Bruce had recommended. Completely stuffed and pleasantly inebriated, it was off to our fourth and final winery, but not before a convenience store stop for ice cream! Low on time, we toured the cellar at Villiera, and then took our seats at a table on the outdoor stone patio. Bruce kicked off the next session by using a sword to uncork a bottle of bubbly. He then continued to pour us a slew of wines, sparkling, red, white, port, fortified. By then, I was completely over wine. Hours earlier, I had lost the ability or will to compare each one with the prior, yet like the rest, I tried to finish strong. It was here that one of the owners meandered out to chat with us, a nice experience to end the tour. 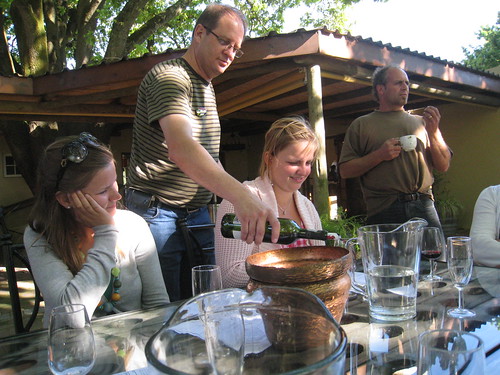 Back at The Backpacker, I was pleasantly surprised by the quality of food provided for the Braai (BBQ). The appetizer was tasty bacon-wrapped figs, with the buffet consisting of chicken kebabs, snoek (a local white fish), potatoes, corn on the cob, salad and bread. There were so many people, the outdoor patio and indoor bar area were packed.

Sounds like a great day! What tour company were you using if I may ask?

African Story or The Africa Story. Something like that. Our guide was named Bruce...I think he was the owner.

Sounds like a great day! What tour company were you using if I may ask?

African Story or The Africa Story. Something like that. Our guide was named Bruce...I think he was the owner.