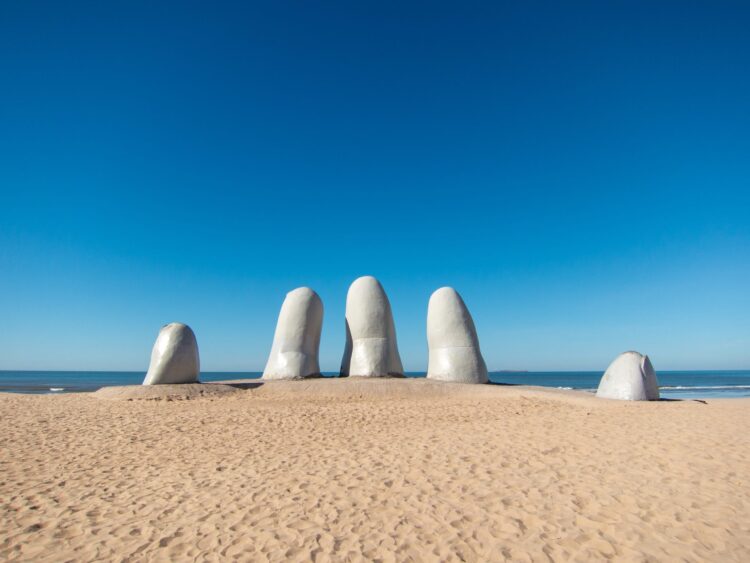 The small peninsula, which marks the convergence of Rio La Plata and the Atlantic Ocean, features a yacht club, luxury shopping, and some expensive vacation homes.

It's a playground where the rich from Uruguay, Argentina and Brazil, and countries around the world go on vacation in the Summer season (late December to February).

The rest of the year, the upscale apartment buildings are dark, and the city center is a veritable ghost town.

Your experience will vary greatly depending on when you visit.

In the Summer, you'll have the beach by day, and discotecas by night.

During Autumn and Winter, you'll need little more than a day to walk around town and kick yourself for not being there in Summer. 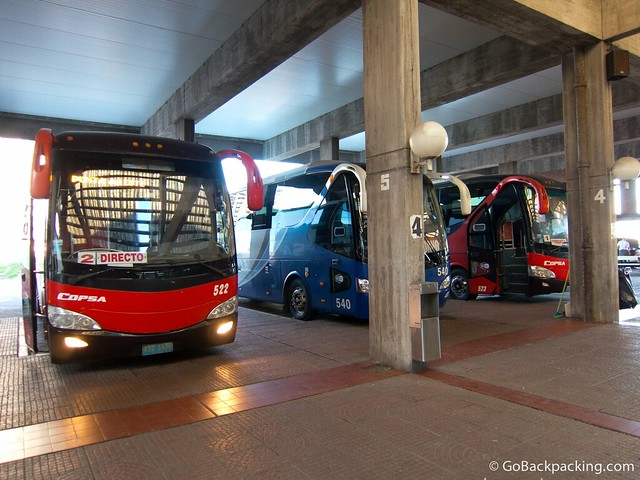 The bus terminal is centrally located in Punta del Este

Punta del Este and the city of Maldonado to the North are served by Capitan Corbeta International Airport.

Flights from Buenos Aires are under an hour. However, it's cheaper to take the ferry to Montevideo, and then hop on a bus.

Modern buses leave Montevideo frequently throughout the day. It's a quick and easy 2-hour ride. The cost is 190 pesos ($10).

Getting Around Punta del Este

Punta del Este is a walking town. At a leisurely pace, the entire length of the peninsula can be covered in about two hours.

If you want to go a little farther or a little faster, you can rent a bike at the cost of about $15 per day. Punta del Este is relatively flat.

Buses are an inexpensive option for getting around the larger metropolitan area. Rides cost less than 19 Pesos ($1) each.

Taxis are relatively expensive and are only necessary if you're trying to visit somewhere outside the immediate Punta del Este area. 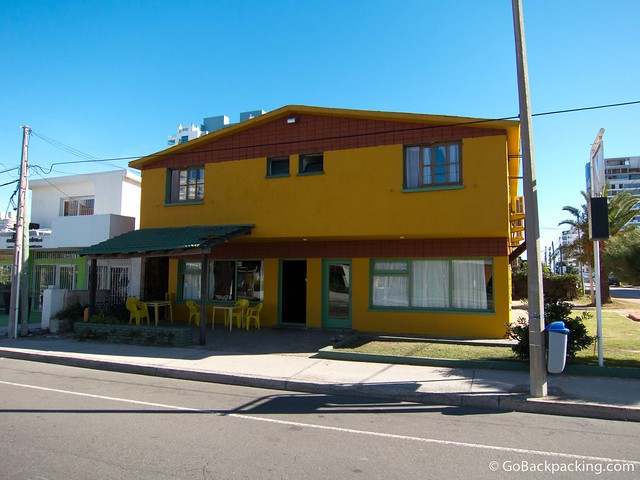 If you're planning to visit during the Summer, you must make reservations in advance if you want to ensure a bed.

You should also expect rates to be two to three times more expensive.

Outside of Summer, several hostels close down (as do many other businesses).  The hostels below are open year-round.

Unless you're rich or planning on hanging out in the low season, renting one of the apartments in the high rises around Punta del Este won't be an option. 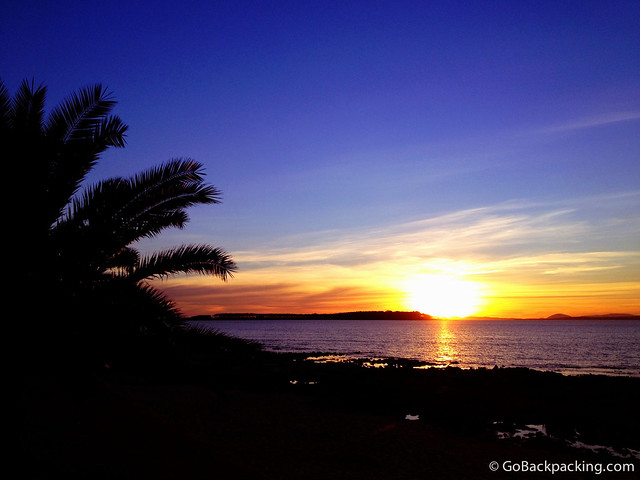 Beaches – There is no shortage of beaches on which to work on your tan while gazing at hot bodies.

Brava Beach (which is marked by the sculpture of fingers emerging from the sand) is the most accessible, just a few blocks from most hostels.

Casinos – Gamble the night away at Casino Conrad, one of South America's best-known casinos.

Sunsets – As the day draws to a close, head toward the harbor side of town and grab a seat on one of the boardwalk benches, or under a palm tree, and watch one of the best sunsets, you'll ever see.

Surfing – Rent a board or take a lesson.

Walk Around the Peninsula

Casa Pueblo – Resort/museum in nearby Punta Ballena. You'll need to catch a bus to see this surreal, white-washed piece of architecture.

Playa Barra (aka Bikini Beach) – A popular option with models. Located further East along the coast, you're better off taking a bicycle, bus, or taxi to get there.

Adjacent the beach is La Barra, a neighborhood filled with discotecas, bars, restaurants, and shopping. 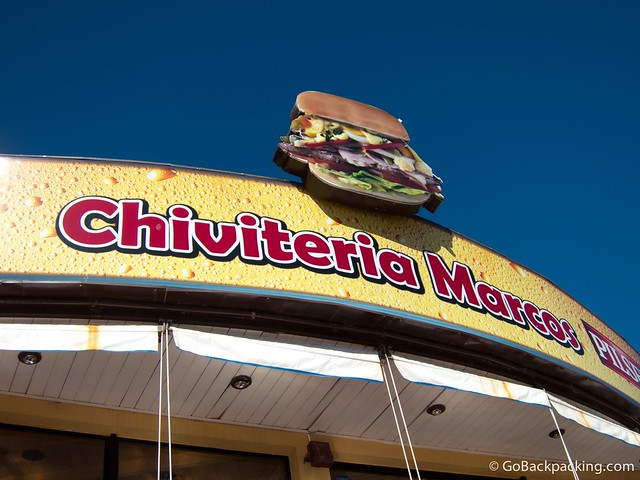 As with the rest of Uruguay, meat is prevalent (and tasty), plus either the beach or harbor is the perfect setting for seafood too.

If you're on a budget, there are a lot of small restaurants where you can get a cheap meal.

Otherwise, expect to pay at least $15 for an entree at a typical restaurant. Pick a place with a beautiful view to make it more worth your while.

Chiviteria Marcos – Rambla del Puerto (along the boardwalk near the harbor). This restaurant chain serves up the classic Uruguay sandwich, the chivito.

Guappa – Rambla del Puerto y Calle 28. One of several restaurants opposite the Punta del Este Port. Sit inside, or dine al fresco in a section across the street, where you'll have a perfect view of the sunset. 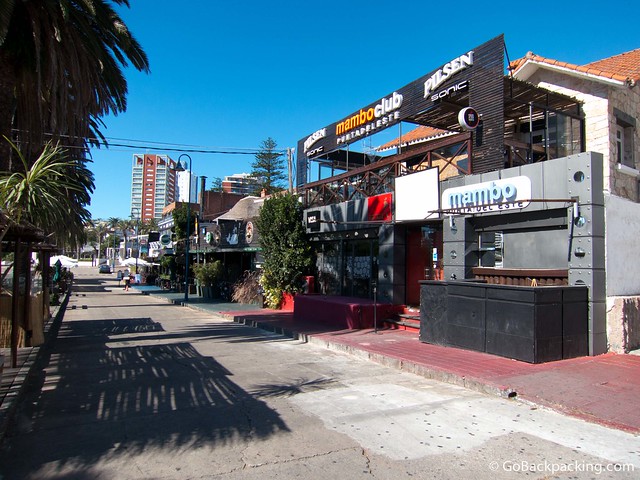 Punta del Este is famous for its nightlife scene during the Summer months (from late December through February).

There are some bars and discotecas in Punta del Este itself; however, there are a lot more in La Barra, located further East.

Hop a bus or taxi. The clubs start to fill up around midnight to 3 AM and go until dawn.

Expect it to be pricey if you want to party in the same discotecas as the international jet-set crowd.