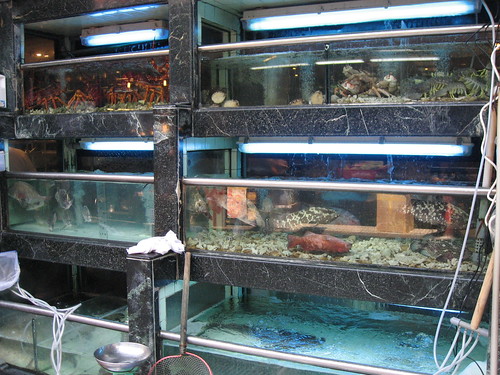 Sleeping late almost every day is one of my favorite aspects of vacation. Even when my bed is as hard as a rock, the ability to schedule one's day around sleep is wonderful. John had to wake up early to attend to his visa and Adam was still out like a light when I arose around noon. I returned to the same restaurant we ate at late the previous night since I felt it was a safe place to order something adventurous for lunch (by the way, I've yet to see a scorpion for sale).

While I saw a few restaurants in Singapore with fish tanks filled with unlucky seafood, the sight really became familiar in Hong Kong and Macau. Softshell turtle casserole with garlic and onions seemed benign on the menu, and there were none of the little guys swimming about in front of the restaurant to detract me, so I ordered it. I am still stuck in a western mindset whereby any meat I order will lack bones, excessive fat, skin, or shells in this case. 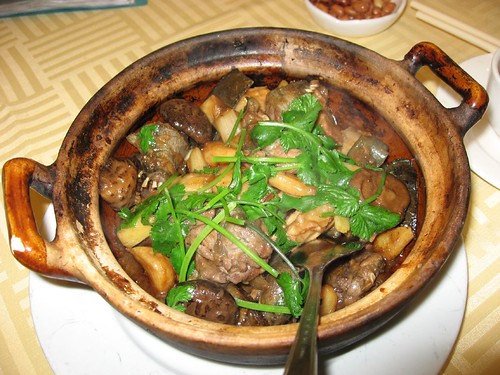 The casserole arrived piping hot. I could immediately see chunks of meat with little bones, possibly ribs, sticking out. It looked good enough, until I started poking around. Images of the little turtle being hacked to pieces upon my orders started to flash through my mind. I could identify the shell bits and came across a square chunk with the turtle's tail (which I couldn't bring myself to eat). If the head was in there though, I didn't see it.

My culinary adventure would've been rewarding had the turtle tasted good. Aside from a few bits of tender meat, I passed on sucking the bones dry and through in the napkin (longing for a batch of juicy pork dumplings).