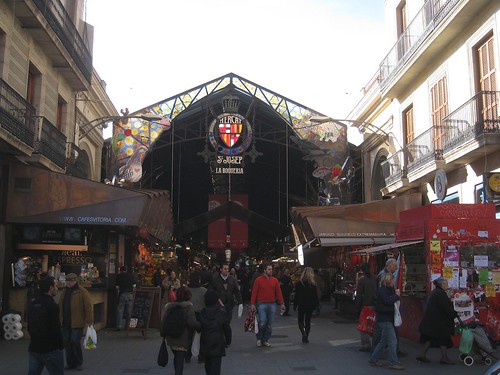 My train arrived in Barcelona at 11pm as scheduled. I took the metro a few stops, and walked five minutes to the nearby family run, year and a half old, Mambo Tango hostel. They pride themselves on a friendly, peaceful, clean, respectful environment. The young, dreadlocked Spanish owner, Toti, warned me about pickpockets in the city, and suggested securing my valuables in the lockers provided at the hostel. 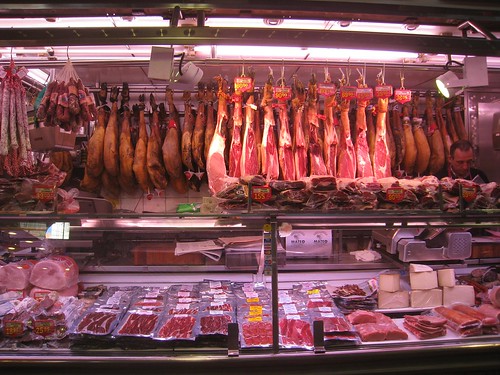 I woke up freezing at 7:30am because someone had turned off the room's heater during the night. I switched to a closer bed to ensure control of it going forward. At the free breakfast in the reception area, I learned of an FC Barcelona home game against Atletico Madrid at Europe's largest stadium, Camp Nou (holds 100,000 people). I asked the hostel owners for help in obtaining a ticket, and headed off to explore the city. 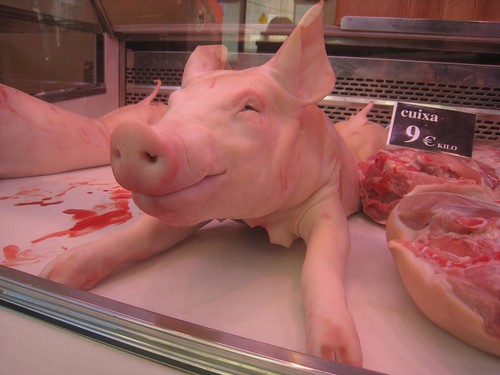 The first notable sight I happened across was the large market on Las Ramblas, the city's most popular street. It was the nicest one I'd seen my entire trip. Everything for sale looked great, meats, fresh fish, massive octopuses, cheeses, fresh fruits. There were some unique items too, such as entire pigs, one of which I witnessed being bought by a man. I bought a bit of local cheese, fresh mango juice, and headed south on Las Ramblas past the landmark statue of Christopher Columbus in front of the waterfront. 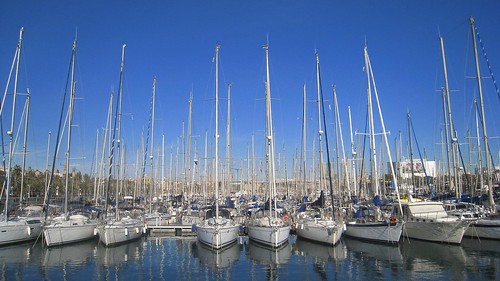 I walked past the harbor filled with sailboats awaiting warmer weather, watched a skateboarder attempt a wallride down into a steep embankment. His spotter was calling out to him from across the opposite embankment when there were no cars coming, for if he went at the wrong time, there would be enough momentum for him to land in the street and get destroyed by a car, whether he landed the trick or not. I stopped for a cappuccino on a sidewalk cafe near a big statue before continuing to the Barcelona Cathedral. 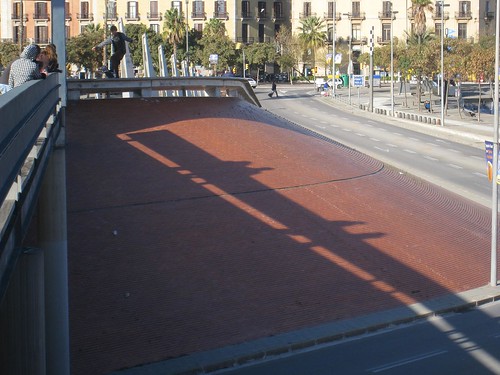 As often seems the case with important European churches, it was under renovation during my visit, and thus scaffolding covered the entire front facade. Inside, it was one of the best I'd seen in Europe. I walked around the interior arcades, admiring the centuries old altarpieces, stained glass, and Gothic architecture. Outside, in an alley between the cathedral and other buildings, a musician was performing on a guitar. I sat and enjoyed the moment, and music, before tipping him and walking the short distance to the Picasso Museum. 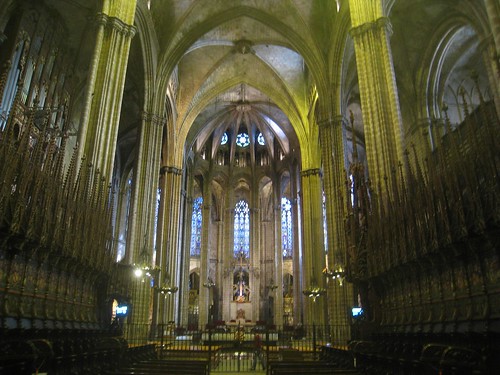 The museum was the first to be built while the artist was still alive, and the permanent collection focused on his early years working in Barcelona, though some of his cubist work were represented in a temporary exhibition. As I walked through the permanent collection, I overheard a teenage girl comment to her friends ” this is his boring period”? which as vapid as it sounded, was a sentiment I could appreciate. 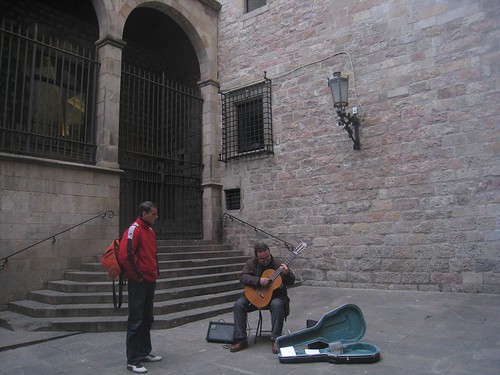 On the way back to the metro, I ducked into a small shop for a sugar rush. I ordered churros, dough nut-like pastries, which came sprinkled with sugar and a cup of chocolate for dipping (and in my case, drinking). Pure pleasure! 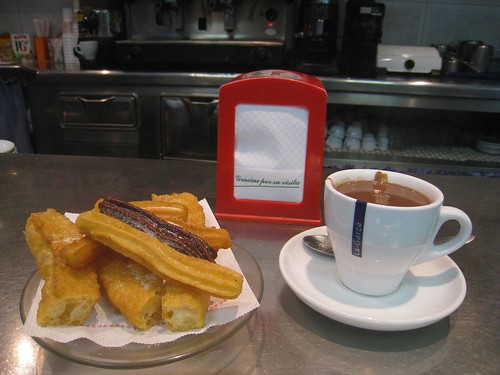 In the evening, I joined Toti and a bunch of other hostel guests for a night walk up the hill in the western part of the city on which is situated a castle. Before leaving the hostel, he suggested we leave all money and valuables behind, which I found odd given we were a group of about 10, with him as our guide. 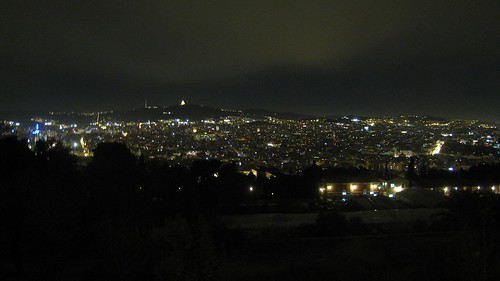 First, we saw a great view of the downtown area all lit up at night, followed by a walk to the other side of the hill which offered views of the very large port. The fast-paced, one and a half hour tour wrapped up with a look at the castle's facade, before we walked back to the hostel where, with the assistance of Toti's Argentine girlfriend, Marina, I bought (to my surprise and delight) a front row, center, ticket to the FC Barcelona match. 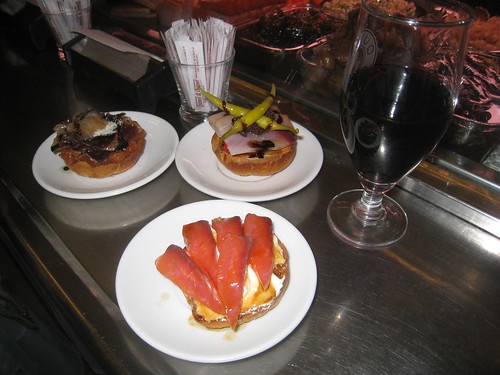 I invited a Taiwanese girl from the tour, and my dorm room, for tapas at the recommended joint next to the hostel. We struggled to pick out dishes, given the staff didn't speak much English, and the menu was in Spanish. We managed to point our way to a few tapas, including bread topped with yogurt, salmon, honey and a few drops of soy sauce. The multiple ingredients and careful presentation already meant they were on a level above anything I'd experienced in the States. A glass of Catalonian red wine completed the experience.

I live in Barcelona for 5 years and still enjoy the city as a tourist,..visiting all the touristic places,..but also I am discovering some secret corners,..and special places of barcelona...those that you can not find in normal guides...

If you are interested, tell me and I will give you some advices,....

I was going to say the same as Deb. I don't know if it's just me, but that little piggy seems to have a mischievous little look in his eye... :mrgreen:

Great to see your still at it and having a ball, mate. Loving the blog, by the way.

I was going to say the same as Deb. I don't know if it's just me, but that little piggy seems to have a mischievous little look in his eye... :mrgreen:

Great to see your still at it and having a ball, mate. Loving the blog, by the way.

That poor pig actually looks like it is smiling..... :lol:

That poor pig actually looks like it is smiling..... :lol: