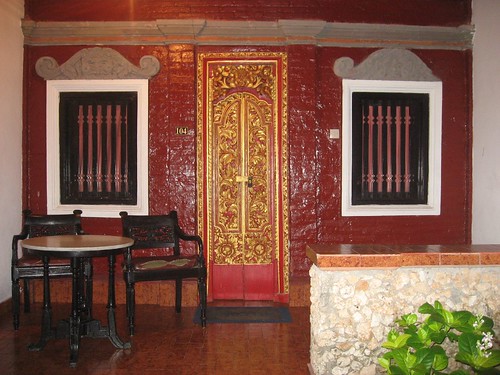 My flight arrived in Bali late at night which was not my preference. After clearing customs, I picked up my bag and made a quick stop in the bathroom which was opposite a prayer room. It was small, with both a Western and Eastern (ie. squat) toilet. The urinal had a white flower petal on it. Clearly I was in new territory.

I grabbed some cash from an ATM in the terminal and headed out into the night. Once past the ubiquitous crowd of people that gathers outside smaller foreign airports, I hit the taxi drivers. I took my third offer, which was the same as my first, and none were in the mood to bargain with me. I wasn't in the mood to haggle so I agreed to pay the $7-8 or so for the drive to nearby Kuta.

Kuta Beach is *the* tourist spot in Bali, and the temporary home to many a surfer and backpacker. It is also the sight of the two terrorist bombings, most notably the one that killed over 200 people in a club back in 2002. I can still remember the image on the news of the building on fire, and I was a bit anxious about the safety situation prior to arrival. 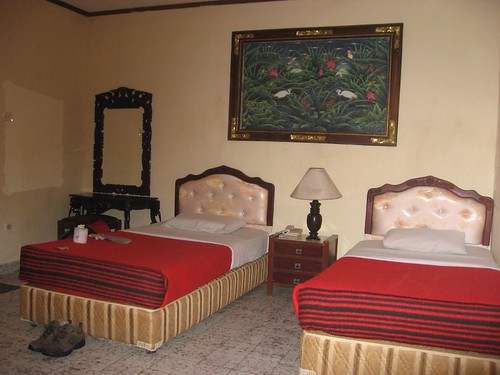 As my taxi driver sped toward my bungalow accommodation for the next 2 nights (right across the street from the beach), I tried to take in all the bars and restaurants lit up at night, and the constant buzz of motorbikes whizzing past us on both sides. The ground was wet so I could tell it had just rained. My taxi driver was kind enough to offer to arrange a “complete” massage, which I was kind enough to decline. He dropped me at my accommodation, and I was met by the security guard as the reception office had closed.

The security guard showed me to my room, and along the way, offered to arrange a “complete massage” or a program (ie. tour package). After dropping my stuff off at my nicely decorated room, I walked next door to the “K” convenience store to get some water. Along the 10-feet of sidewalk to get there, I was offered drugs. I was getting quite the introduction to Bali. The convenience store was blasting Guns ‘N Roses. They were out of the cheap 1.5 liter bottles of water (about $0.30 apiece), so I had to cough up a bit more than $1 for Evian. I returned back to my room, and was out like a light.

PS – for all those that voted for me to splurge on a nicer than normal accommodation since reaching the 200 subscriber mark, this was it! And it only cost $24/night, including free breakfast, towel, soap, and toilet paper!