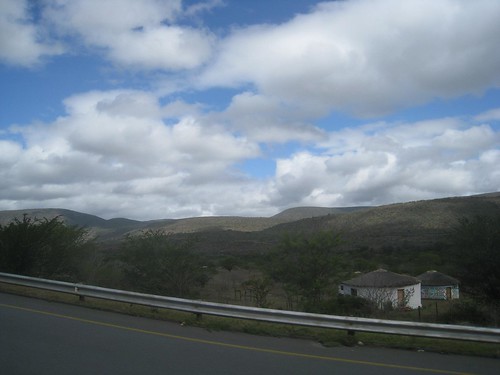 When I received word the children's recital was canceled because they couldn't walk to school in the rain, I left Buccaneers for Bulungula, a new eco-friendly backpackers set further up the coast in a Xhosa village. It would prove to be a long travel day.

The first leg was a comfortable three hour Baz bus ride further east along the main highway. We passed Nelson Mandela's home, though no one asked to stop for photos. Not even me. It wasn't particularly picturesque. Most everyone then got off at a big gas station complex which doubled as a bus stop. Next, I boarded a minivan shuttle run by Coffee Shack, the popular party backpackers in Coffee Bay where I intended to go after Bulungula. Scrunched in the back left corner of the van for 45 minutes, the views of the Xhosa communities we passed were obscured by heavy fog. 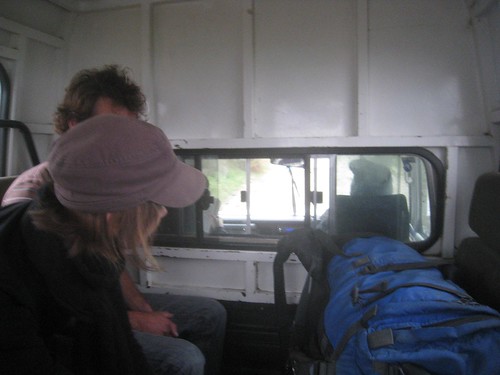 The final two hour leg was in the back of a customized Toyota pick-up truck. While the road to Coffee Bay is paved, the road to Bulungula starts out as gravel, then dirt, stone, and ultimately grass. Many sections looked more akin to dry riverbeds than my concept of a road. Eventually what passed for a road ended, and we were driving on dirt and mud tracks through pastures and villages. After being bounced around like popcorn with a young French couple for a few hours, we arrived at the lodge where we were given a tour and shown our beds in traditional rondavels (round thatched huts).

I joined Magali and Sebastien for a big Castle Milk Stout and dinner. On the menu was coconut curry with chicken and rice, though the former contained more broccoli and cauliflower than juicy bits of chicken. The ambiance in the bar/dining room felt like a lounge, candles alight all around us and cool music playing in the background. Magali and Sebastien reminded me of another friendly French couple from my time in Laos, Nicholas and Caroline (who are now back in Paris). After they retired, I played a few rounds of Asshole (the card game) with the only other guests that night, four girls on holiday before graduating from the University of Cape Town. While I can't speak to whether Americans stay in hostels in the USA, I never came across Kiwis in the New Zealand hostels or Aussies in the Australian ones.