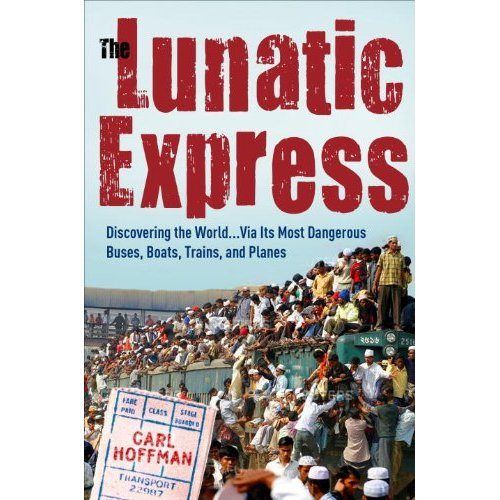 I cracked open The Lunatic Express the same night it arrived in the mail.  The premise of “discovering the world…via its most dangerous buses, boats, trains, and planes” was right up this traveler's alley.

It'd been over a year since I'd first set foot in the streets of Medellin, Colombia – once the world's most dangerous city.

I desperately missed the rush of discovering a new country first hand, of wondering whether I was at the proper train platform in India, and devising Plan B's should my Thai or Indonesian ferry fail to reach its destination.

Carl Hoffman's new book, The Lunatic Express, satiated that thirst for gritty adventures that I'd been missing since my return home.

His 5-month around-the-world journey begins in Washington, DC, when Hoffman takes the Chinatown bus to New York City.  Immediately, I felt as though I was along for the ride, having taken that same bus a dozen times before.

It doesn't take long for him to inform us that his vision for the trip was not mere survival, but to see the world from the same perspectives as those (often poor) people who have no other options for getting around.  Despite this disclaimer,  there is a healthy dose of morbid fascination with the deathtraps he seeks out.  Each chapter, in fact, begins with a news clip citing mass deaths associated with a plane crash or a ferry sinking in the region he visits.

As much as I enjoyed reading about someone other than myself riding for long hours in cramped African trains, and filthy Asian ferries, there was another level to the book I appreciated even more.  From time to time, Hoffman reflects on the motivations behind his personal drive to explore the world, and the resulting stress it places on his relationship with family members.

In what struck me as an odd gambit to spend time with his daughter, Lily, he invites her to spend five days riding the nauseating buses of Peru with him.  After putting her on a plane back home, he “missed her and felt guilty for not being more normal, for pursuing a life that took me so far away, for needing to experience the intensity of loneliness and danger and discomfort.”

Later in the book, Hoffman hits on another lesson I'd learned on my own 'round the world trip:

All those people I'd met on the road had made me think deeply about travel and human connection and escape.  I had always prided myself on the connections I made while traveling, from the nutty Swiss guy in Mombasa to Fardus in Bangladesh to Moolchand in New Delhi.  But all those interactions were fleeting, shallow–I couldn't kid myself that they had been otherwise.

This reflection reminds me of the way George Clooney's character in “Up In The Air” quietly goes about falling for the lead female character after a lifetime of casual relationships.  It also reminds me of my own realization about the inevitable shallowness of (most) “connections” on the road after my first few months of continuous travel.

I was initially drawn to read The Lunatic Express because it offered me an escape–the chance to play armchair traveler until my next trip, however it surprised me by offering much more.

Carl Hoffman hits upon many of the universal feelings one experiences when traveling for long periods of time, and in that respect, I connected with the book on a deeper level than I expected.  Whether you're planning your next adventure abroad, looking to reconnect with trips past, or simply curious about how the majority of the world's population travels every day, I highly recommend going for a ride on The Lunatic Express.

I received a free, advanced copy of The Lunatic Express for the purpose of writing this review.