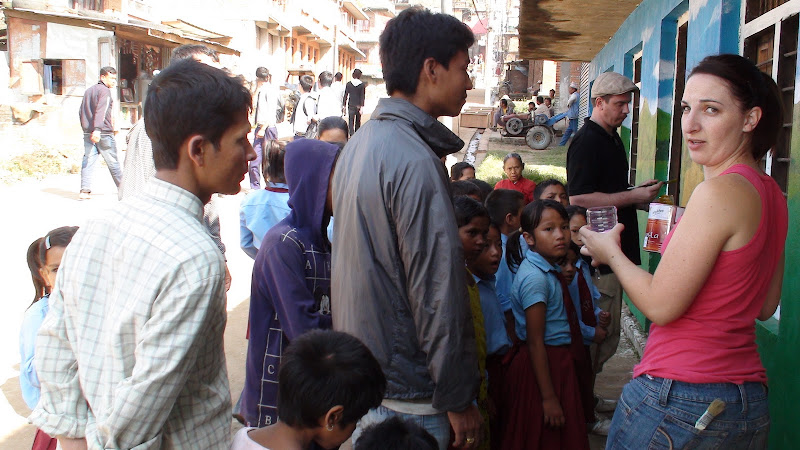 Ramesh, Clinton, and I painting as school children look on

This is a guest post by Janelle K. Eagle. If you want to guest post on Go Backpacking, please read more here.

The answer is yes. The school Principal was speaking about us, and he had called me fat.

I came across “Mr. Rude Principal man” while I was teaching English and Theater to a group of underprivileged girls in Bhaktapur, Nepal.

One of my fellow travelers, Clinton Bopp, was painting at Shree Sharada School nearby as part of The Unatti Foundation's “Child to Child” project.

This innovative work connects children in California with children in this small village and others around the world.

At the time of the name-calling incident, Clinton, a talented painter living in Los Angeles, was transforming the front of the four-room school from an old wall full of political graffiti into one of the most beautiful buildings in the village.

I was filming him for my forthcoming documentary and also assisting with painting some of the smaller details on his massive mural.

Ramesh, the man who runs the orphanage where we were staying and who is the Nepalese leader of the Unatti Foundation was overseeing the painting project as he was a graduate of this small school some 25 years earlier.

Ramesh's family has lived in Bhaktapur for seven generations, so he knows his way around and is well-connected.

Clinton and I took advantage of Ramesh's established relationships in the area and knew it was no big deal when we ran out of a particular pink paint color that day.

Ramesh offered to visit with a local paint store owner who would cut us a deal and asked that my friend Patty and I accompany him on his motorcycle so that we could carry the paint cans back while he maneuvered the bike down Bhaktapur's small alleyways.

Ramesh's motorcycle carried himself, Patty, and I the very short distance to the paint store.

When Patty and I returned to the school site with fresh paint, the school Principal came outside to greet us and struck up a conversation with Ramesh.

Suddenly they burst into laughter. We are so fat; this man could not believe the bike had managed to carry all three of us. He was very impressed.

I am very impressed I didn't punch him in the face once Ramesh translated why they were laughing so hard. 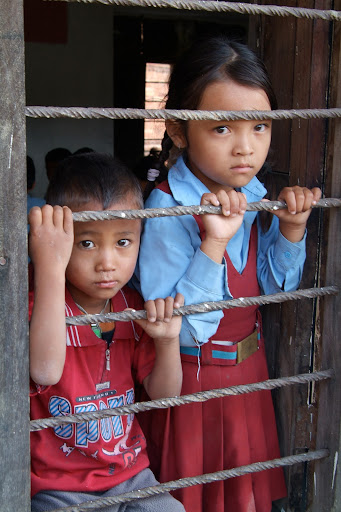 Children from the Shree Sharada School

This seemingly unbearable mental abuse is, of course, a great cause for reflection.

In Nepal, Patty and I are considered fat. Nepali people, especially in the small village of Bhaktapur, are often malnourished.

Children regularly appear at least two years younger in size than their actual age, simply because they don't have the resources to grow healthy bodies.

Considering the fact that the school we are painting is a public school for the most impoverished children in the village, it should not offend us that comparatively speaking, we are HUGE.

What's hilarious about the timing of this Principal's comment is that Patty and I lost a lot of weight while we were in Nepal.

We had grown accustomed to obsessing over our thighs and flabby arms and enjoyed being out of America where indulgence is stuffed in our face just as often as images of too-thin models.

But in Nepal, without a car to sit in, unnecessarily large meals served to us at restaurants or unhealthy food, in general, we both slimmed down at a rapid pace. We dubbed this change, “The Nepal Diet.”

After being called “fat,” the weight loss suddenly seemed like less of an accomplishment. To the people of Bhaktapur, being fat meant we looked healthy.

Every day that we “fat girls” showed up with Clinton to the disheveled school to paint, the skinny children of Bhaktapur gawked at us, practiced their English, and sought positive reinforcement.

It was easy to swallow our proverbial Western Thinness Pride when we looked at these children in the face every day.

This fat chick was and still is comfortable with the name-calling. Instead of feeling like I should skip a meal, I focused on painting a school for skinny kids who deserve it.

Janelle is a documentary filmmaker with an insatiable desire to get out there, see it, and share it. A strong believer that change happens over good home-cooked meals, Janelle has dined with locals all around the world. She hopes she's helped create change along the journey. She shares her writing, photography, and videos on www.journeywithjanelle.com.

To the people of Bhaktapur, being fat meant we looked healthy.

There are a few very good points made here. On the whole, I'm not awfully keen on blogging. however, every so often we all have to pay attention.