About two years ago, I published the Cost of a Trip Around the World based on my experience traveling for 15 months through over 20 countries.

I kept meticulous records of my expenses not because I was trying to stick to a budget, but out of a curiosity for what I was actually spending.  I was also intent on sharing the results with readers as I traveled, so they could have an idea of how much money to save if they were planning to visit similar places.

This summary of my expenses continues to be Go Backpacking's most popular post in terms of raw traffic month to month, so I know plenty of people are looking at it.  And I still receive the occasional comments, which have echoed a common theme — that my spending was surprisingly high.

@adventurerob said “I'm surprised you clocked up such a cost in Thailand though, I found it a lot cheaper then $55 a day.”

Friedel of Travelingtwo.com wrote “this strikes me as so expensive”

Mic asked “u think u could spare some extra money. because i think for ex. 45 € for india per day is a loooot. dont u think?”

Roeyurboat commented “Between $35,000 and $40,000 for 15 months of travel is hardly even close to a “backpacker's budget” $54/day in Nepal? $51/day in India and similar rates for Thailand and Indonesia. Dave must have been enjoying some very high end accomodations to average those rates in those countries.”

Txrizzle recently shared “My opinion is that the spending listed above is much to excessive. One could take that same $30,000 and spend 3 years traveling the world. $50+ in Thailand? That's intense.”

And last week Andyl added “I agree with many here, I don't know how you managed to spend $63 a day in cambodia but that's nowhere near “between backpacker/flashpacker” That's living 30 times costlier than the average citizen…”

Instead of continuing to respond on a comment by comment basis, I'd prefer to address this line of questioning as a whole.

First, this post was a summary of my daily averages per country, and if they seem extravagant for places such as Thailand or India, I believe it's due to my accounting method, not my actual standard of living. 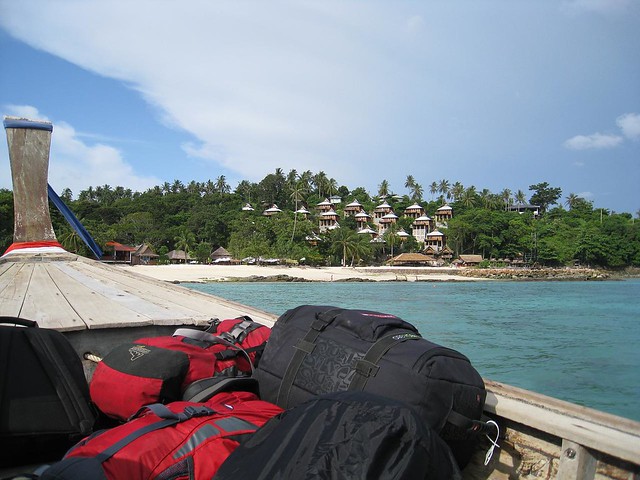 The most I spent on a night's accommodation?  $40 for a private room at a boutique hotel in the capital of Laos, and that was after 8 months of staying in hostel droms, cheap guest houses, and bungalows.  In fact, for anyone who took the time to look at my detailed spreadsheet which I link to at the bottom of the post, they'd see I spent an average of $9 per night in accommodation over 253 days in Asia.

My average daily spending numbers are inflated because of the “miscellaneous” category which was a catchall for stuff like souvenirs, cost to ship souvenirs home, new clothes, guidebooks, and internet cafes (which I used for 2+ hours per day uploading photos and managing this blog).  Those costs are too subjective, too different for every backpacker, and thus skewed the non-negotiable categories that matter most — visas, food, shelter, and sightseeing.

When I share my expenses for the recent Japan trip next month, I'll aim to present a more accurate cost of daily travel.

Backpacking is an attitude toward travel, not about one's age or spending habits.  If you travel with a backpack, you're a backpacker.  I don't care if you drop your head at night on a fluffly down pillow and fresh linens at a 5-star forest lodge in Rwanda, eat at a restaurant frequented by heads of state in Delhi, or try and swallow undercooked intestines in a Colombian pueblo.

A backpack symbolizes two things to me, wanderlust and independence.  Sure, you can have both with the wheeled-suitcases, but try jumping off a Thai longboat on a beach carrying one of those suckers.  Or gliding between the aisles of gift shops as you do a little last minute shopping on your way out of a country.  The ability to do both remains the reason I continue to travel with a backpack.

In Japan earlier this month, food quickly became my primary focus given the cold Winter temperatures and lack of flowers in the gardens.  What I saved on accommodations, I spent on food (and then some).

My approach toward travel continues to evolve with age.  At 34, I can still sleep stacked like a sardine in a 10-bed Kyoto dorm, however I also want to know what it's like to eat in a Michelin-starred restaurant.

And as long as I'm carrying that backpack, I'm going to share my experiences on this blog.

Your turn. What does being a backpacker mean to you?

Totally agree David, we own and operate 1849 Backpackers in Albany, Western Australia, and the diversity you talk about is alive and well and backpacking all over this beautiful world. In the last two weeks we have seen five doctors staying with us from Pakistan, an 18 year old who arrived in Australia with $2 in his pocket and little else, a 77 year old cyclist from the UK, a Canadian motorcyclist in his 80th country, hikers, travellers from Taiwan, India, Western and Eastern Europe, the States, Japan, Africa, Thailand, China and Scandinavia. Even the odd Aussie and Kiwi here as well, most driving, some not, and all with different ages, backgrounds, wealth, size, shapes and colours but all with one thing in common - carrying backpacks. Backpacking is a state of mind - I will never throw mine away :o)

For me, ''backpacking'' is a ''purpose'' & a ''mentality'', the purpose is to experience new cultures, new people and the countries day to day way of life. The ''mentality'' is to spend carefully so that you can stay longer in order to experience the country on a deeper, rawer level than a regular holiday. When you backpack, your closer to the countries real way of life. When you go on holiday all you see is nice smiling faces as people carry your suitcases, serve you, hold doors open, bring you towels, they're paid to be nice to you. Backpackers dont want this false ''niceness'', they want to explore the real people and what they do and see.... but to be honest, theres no need to really try and define what backpacking exactly is. It is what ever you perceive it to be.

I recently went to indonesia and singapore again, stayed in nice hotels and went to universal studios and all the tourist stops and i had an amazing time, im a backpacker but i freaking love holidays, all that indulging is awesome and is also good for the soul, well, my soul at least. My mentality when on ''holiday'' (not backpacking) is to do everything that is just pure fun and/or relaxing and not care about the price (even if i should be). My mentality when on holiday is money doesnt matter (because money is such a stress in real life). I sit in starbucks on orchard rd, infact i spend half my day at orchard rd. I eat a burger in hard rock cafe, i go to sentosa island and ride the cable car, i sit on the beach and sunbathe.

But the previous year i went to the same two countries indonesia and singapore but i was backpacking. Staying in hostels, using the cheapest (more often most fun) form of transport, eating where and what the locals eat, sleeping where locals sleep. Going to temples and events intended for locals. Drinking in bars that locals drink.

Theres two sides to every country, the regular (real) side and the tourist side, both are great, both are fun. But you will never experience the 'real' side of a country by being a holidayer, you need to be a backpacker, something ive been telling my dad for years and he still doesnt get it. My dad has gone to about 6 countries in asia for the last 1 and half, but hes always visting them on holiday, not backpacking.

Hi Dave can you drop me an email so we can talk to you about a few ideas i have that you might be interested in. I went backpacking at 20 years old for 2 years, ive been travelling on/off, ever since (im 27 now), using the Philippines as a base. I have an online retail store in the uk and a business in the Philippines, but right now i have a few new online projects im considering relating travel so i would love to have a chat with you.

Yea, and how much you spend says a lot about your attitute. Listen, Dave - you spend per day almost how much the locals make in a month. Could you BE more superficial? Whatever, man, have fun.

You're saying it's superficial to spend money I worked hard to make? When I'm traveling, that money goes into local businesses -- restaurants, hostels and budget hotels in places like India (that don't have hostels as we know them in Western countries), local tour companies and guides.

I hardly think that's superficial, and I assure you my travel is far from the luxury end of the spectrum.

I often found myself not knowing how to respond to the question "did you backpack" when asked about our 15 month RTW trip. I don't know? Are we backpackers? We started out doing the first half of the trip with backpacks, but what is backpacking? We were staying in mostly hostels but as a couple it was in private rooms. I couldn't take the back discomfort anymore with a backpack so I switched to a wheeled suitcase part way through the trip. Nothing changed though, our attitude, budget, and spontaneous travel style stayed the same. Where we backpackers with the backpacks and then all of a sudden not? Maybe the more appropriate question is "what is your travel style?"

Hi Audrey, I was thinking about this last night, and while labels do make it easier to categorize people, asking someone about their travel style seems the more approrpriate question. If I were traveling the same, only with a wheeled suitcase, I'd think of myself as an "independent traveler" :)