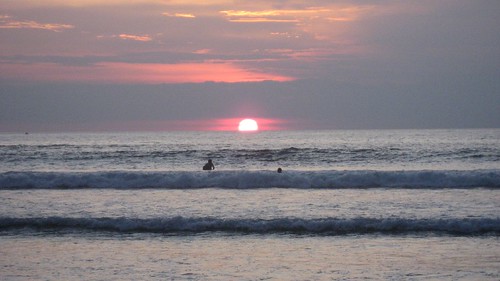 By my second and third days in Bali, I was starting to fall for the place.

I figured out the various ways to escape the street vendors and intense mid-day heat – hanging out in your accommodation which would have plenty of shade around either a pool or garden and ducking into restaurants and internet cafes.

I also walked past them with purpose and found I was hassled less.

I learned that around 6pm, close to sunset, locals and tourists alike head to the beach to watch the sun set over the Indian Ocean.

Surfers catch their last waves while little kids play on the beach.

Locals start up soccer games or try to entice the Western women to knock a volleyball around with them.

The night I snapped the sunset photo above, the beach was also chock full of Indian sailors in their white uniforms (3 battleships were docked for 5 days). I'd never seen a scene like it. 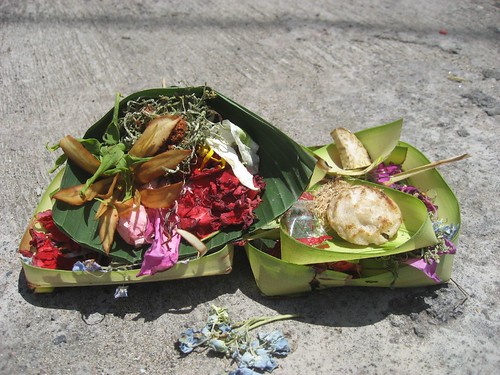 I could buy a filling lunch or dinner for the cost of a Cadbury chocolate bar in Australia.

I could buy snacks without feeling like I'm breaking my budget (not that I worried too much about that when it actually counted!).

I admired the devotion and religious practices of the local Hindu population.

Their offerings to the Gods were everywhere.

They were placed outside shops, in alleys, in cars, on motorbikes, in front of statues, and often with incense which wafted throughout the air. 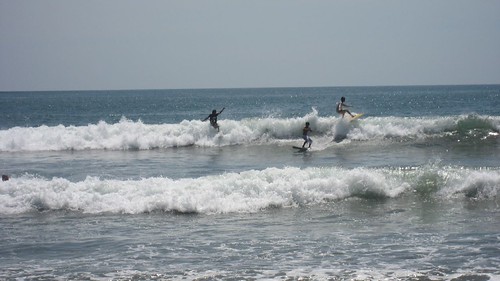 Bali is filled with great surf spots, and Kuta and nearby Legian beaches are considered great beginner breaks.

People from around the world come here to surf, and I just didn't have the energy give it another go.

Ok, I'm OBVIOUSLY living on the WRONG continent. Not that I didn't know that several years ago, but now I'm convinced. Great surfing and cheap massages? Why oh why am I sitting in Stabucks paying $4 for a bloomin cup of joe?

For approximately 7 or 8 USD, it is a luxury that even a budget traveler shouldn't pass up.

Or save your cash for somewhere like Pai, Northern Thailand, where a massage is $2-$3 per hour :twisted:

Well, you could not choose a better place to relax than Bali...the scent of the air, the sound of the waves, the friendly faces, sunshine and great food are all a winning combination! And, of course, the price for all this (once you get there) can't be beat!

However, make sure to get a MASSAGE (or ten) while there. For approximately 7 or 8 USD, it is a luxury that even a budget traveler shouldn't pass up. I swear, every time I am there I get at least one a day....maybe even two. :grin:

Too right! My advice to you is: buy a good book, head for the nearest hammock, and enjoy paradise!