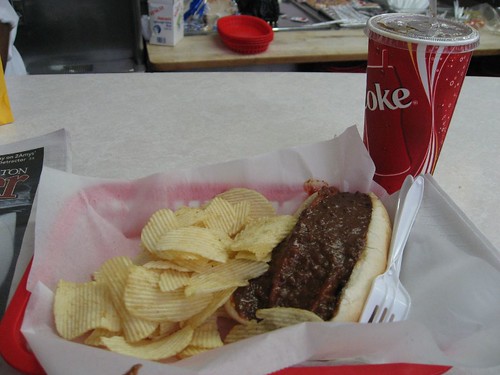 Ben's Chili Bowl was born in 1958 and Washingtonians have been thankful ever since. Over the past few years, I'd heard it's name associated with stars such as Bill Cosby, and finally decided to see what the buzz was about.

Located in northwest DC, along the U Street corridor, Ben's Chili Bowl has watched the neighborhood around it gentrify and develop in recent years. The Starbucks and metro entrance across the street is a fitting contrast to the historical chili joint which began serving customers when U Street was once known as the “Black Broadway” due to all the jazz clubs. As noted on the history page of Ben's Chili Bowl website: 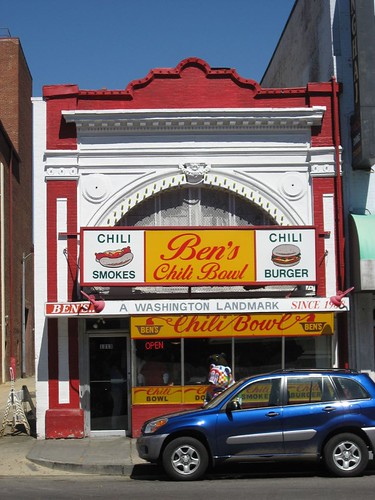 Stepping into the Bowl around noon on a beautiful Saturday afternoon, I wondered whether I'd be in for a wait to get my food. The restaurant had clearly marked instructions to line up, order your food, and pay before taking a seat. It only took a few minutes for me to order and pay, despite the place feeling and looking quite busy. I went with Ben's Original Chili Half-Smoke, a side of fries, and a Diet Coke, which totaled $10.

I grabbed a seat at the end of the counter, by the jukebox which was blaring. A college football game was on TV in the corner, above a small sink. There were giant metal canisters around the sink, and before I could give too much thought to whether employees actually use it, I saw one use it, and refill the towel dispenser to boot. I flipped through a copy of Washington's weekly City Paper, and about 5-10 minutes later, one of the servers brought over my meal.

While it's hard to see in the photo above, there is a jumbo hot dog under all that chili, and it was split in half and grilled further, before the addition of mustard and onions. The potato chips and fries were standard fare, though a nice compliment to the main attraction. Next time I'd skip the fries altogether because the serving was too large for one person. The Chili Half-Smoke is served with plastic utensils, however I was easily able to pick up the bun and eat with my hands (though I did manage to spill chili on my shorts).

Americans know how to make a darn good hot dog, and Ben's is no exception. Despite the slathering of delicious and slightly spicy chili, I was able to taste the flavor of the dog beneath it all, and it was one of the best I've ever had. The atmosphere was lively, with a mix of eat-in and take-out customers rotating through the restaurant. The staff were upbeat and friendly. Their menu offers several vegetarian options, including chili and burgers, and the breakfast options are plentiful.