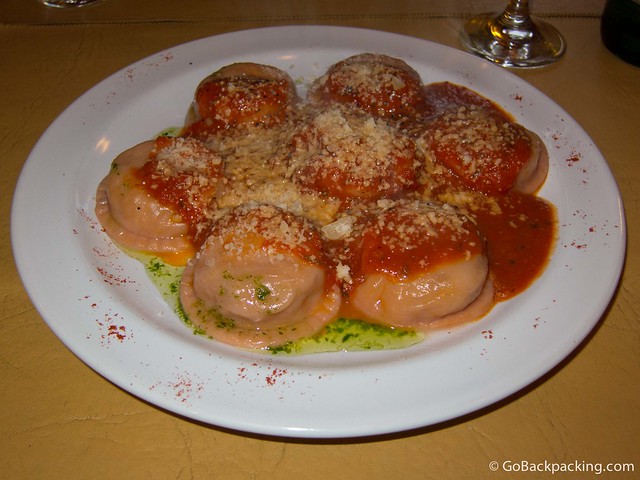 Fine dining is hardly the first activity that comes to mind when one daydreams about Patagonia, yet night after night, I found fantastic food awaiting us.

Once we arrived, we were in the hands of Christian, our G Adventures guide.

After 6 seasons of leading tour groups in the region, he knew all the best restaurants. And thus began my personal quest to find the best food in Patagonia.

My Dish:  Pasta cushions filled with chicken, mozzarella and tomato

After our chilly hike around Fitz Roy mountain, we all enjoyed the cozy atmosphere of Fuegia.

I realize pasta is hardly a regional dish, but I needed a break from the copious amounts of meat I'd eaten my first few nights in Buenos Aires.

The pasta was homemade, and stuffed with deliciousness. To be more specific, chicken, mozzarella, and tomato.

As you can see in the photo, they were big ravioli, and beautifully presented with tomato sauce, olive oil, and freshly grated parmesan cheese. 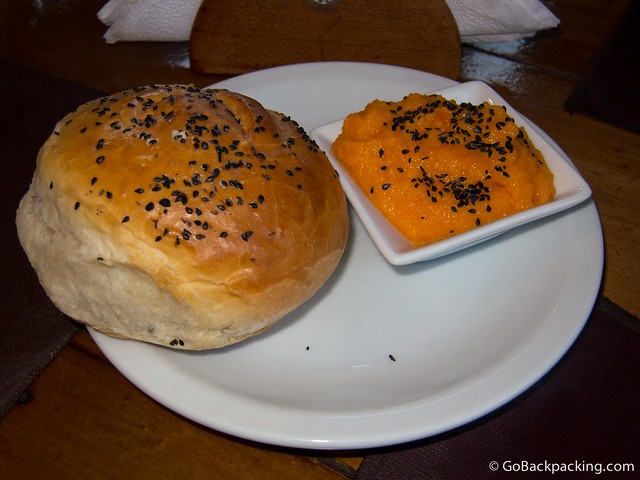 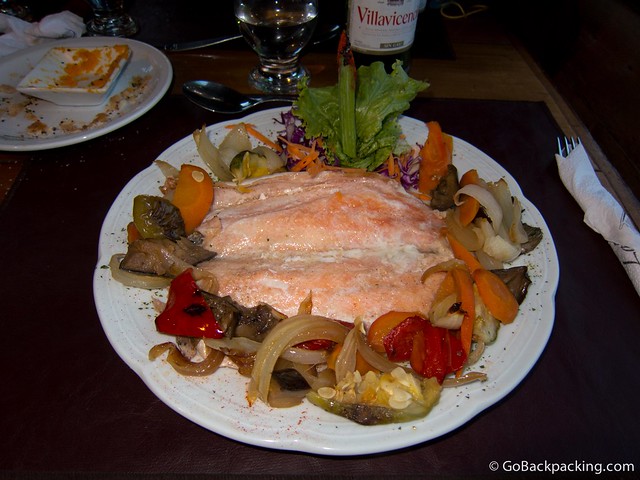 Trout with a citric sauce and vegetables

My Dish:  Trout with a citric sauce and vegetables

For our second night in El Chalten, after a ridiculously awesome day of ice climbing on Viedma Glacier, we headed to La Tapera.

The atmosphere inside was warm and welcoming, thanks in part to an open fireplace near our table.

I've had good trout throughout the Andes, from Colombia to Peru, so I decided to try it in Argentina too. On this evening, it was fine, though if I could go back in time, I'd have picked something different. 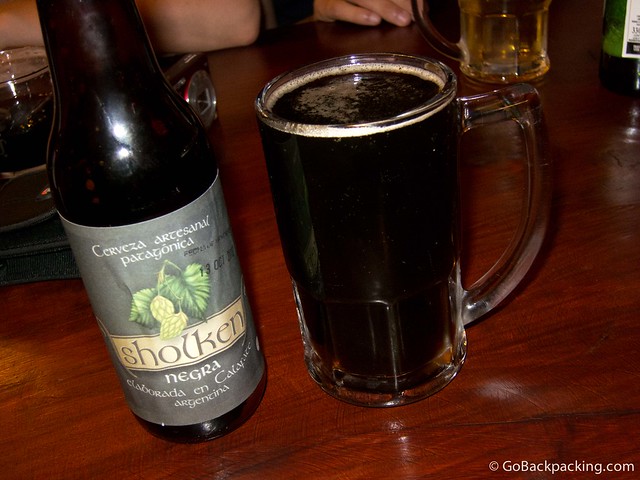 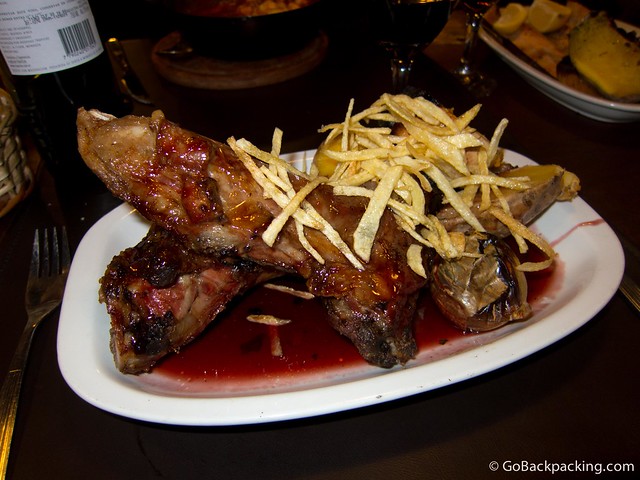 My Dish:  Patagonian lamb with Calafate sauce and roast vegetables

Patagonia is as well-known for lamb as New Zealand, where I'd ordered it on Christmas Eve in 2007.

On this, our second evening in El Calafate, I was feeling good after a gorgeous day at Perito Moreno Glacier.

The lamb at Don Pichon blew away that Christmas Eve rack of lamb, and any other lamb I've ever eaten.

It was perfectly cooked, and bathed in Calafate sauce, made from a local berry by the same name.

Despite all the bone and fat, I was able to carve off some succulent bites of pure meat. Christian recommended we pick up the bones with our hands, but I didn't want to make a mess.

The sides included what I think were two kinds of potato, one regular, and one sweet, as well as a few crispy French Fries thrown on top. 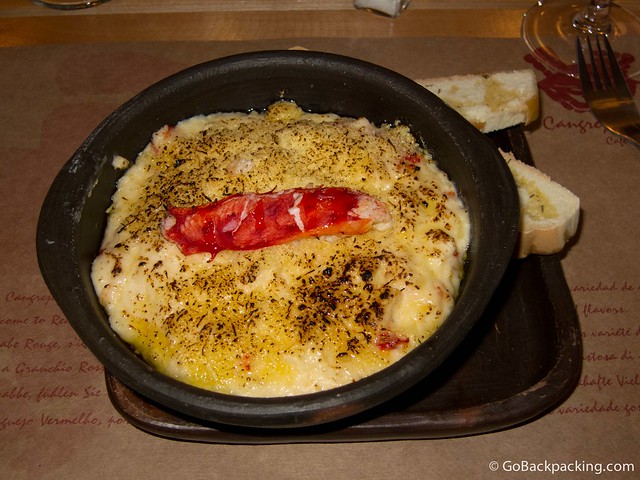 This was my favorite meal in Patagonia, and likely one I'll never forget. Yea, it was that heavenly.

Cangrejo Rojo (Red Crab) is a new restaurant opened by a married couple. According to Christian, it was only being frequented by locals, in part due to its location away from the city center.

The King Crab is a specialty of the region, and I was anxious to try it. I was especially happy the chef/owner prepared it as a chowder, so we didn't have to deal with breaking shells.

The chowder was decadent. I don't even want to think about how much cream and butter he used. There was plenty of crab meat too. The dish was rich and creamy, yet rather light at the same time. 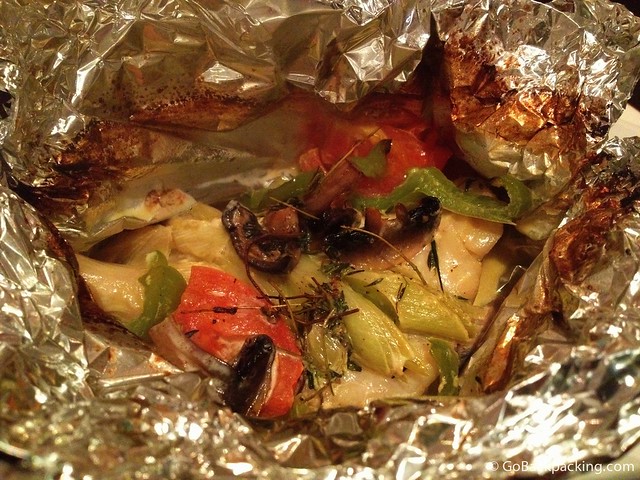 My Dish:  Sea Bass with a white cream sauce and vegetables

After 3 days of hiking, and 2 nights of camping in Torres del Paine National Park, we returned to Puerto Natales.

At Angelica's, I opted for the “Sea Bass” prepared in aluminum foil, with vegetables and a cream sauce. It was perhaps my second favorite dish of the trip. The white fish was tender, and the cream sauce was a rich complement.

I posted a photo on Facebook indicating it was “Chilean Sea Bass”, and my buddy Brendan quickly pointed out I was eating an endangered fish.

In the back of my mind, I was aware Chilean Sea Bass is considered off-limits, but I saw Sea Bass listed no less than 3 times on the menu.

The next day I mentioned it to Christian, whose from Chile, and he said Sea Bass is a term used to describe a variety of fish.

Because the menu wasn't more specific, and I didn't ask the waitress, I'll never know if it was the Chilean variety fished in the waters of Antarctica, known as Patagonian toothfish.

As I'm writing this, I searched Google and found a fact sheet by the US Department of Commerce which specifically states that the Chilean Sea Bass is not an endangered species, though illegal fishing is a continuing threat to the population. 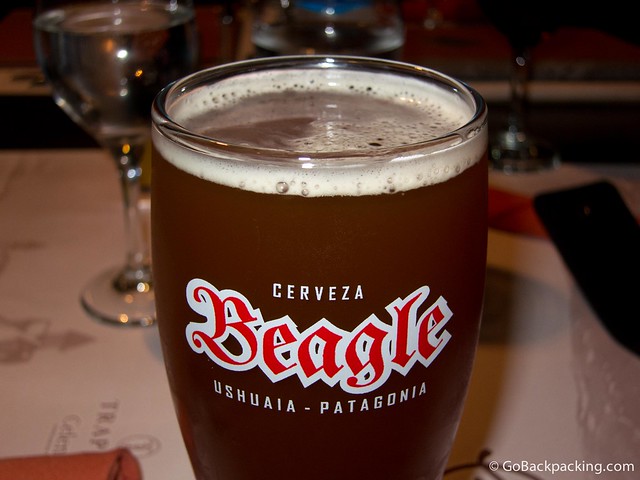 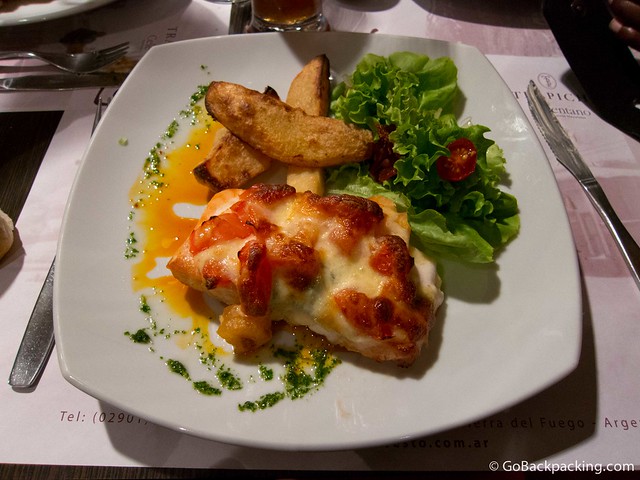 I followed Christian's lead at Maria Lola, ordering the Salmon Capresse during our first dinner in Ushuaia.

I was a little worried the cheese might overpower the salmon, but the combination actually seemed to work well.

That said, I doubt I'll ever order mozzarella-smothered fish again. 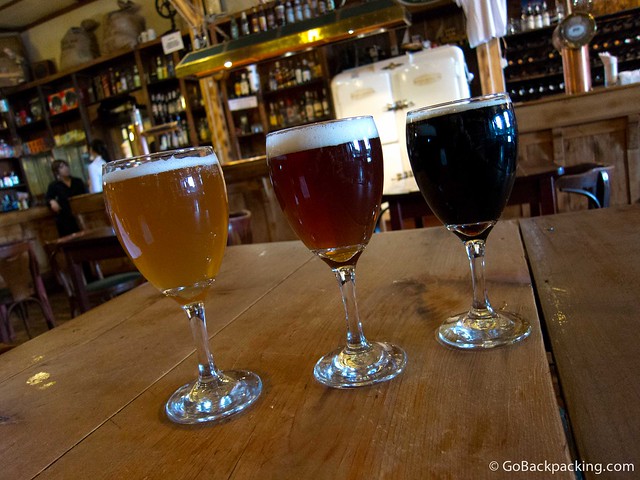 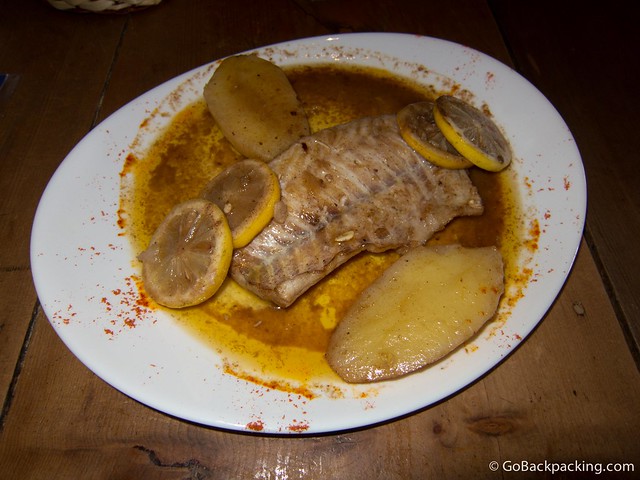 White fish in a lemon sauce with potatoes

My Dish:  White fish in a lemon sauce with potatoes

After taking a scenic flight in the skies above Ushuaia and the Beagle Channel, I returned to town and grabbed a solo lunch at Ramos General.

The place is both a local and tourist favorite, and I could see why once I entered. The restaurant is decorated with wall-to-wall antiques. It's an atmosphere befitting of a city at the end of the Earth.

I ordered a taste test of the local Cape Horn beers, and was surprised by the wonderful white fish in lemon sauce. It was my 3rd favorite meal of the trip.

I had a chocolate mousse for dessert, but as you've seen, desserts weren't a big part of my meals.

I rarely had room for them after the appetizers, main courses, and wine or beer accompanying the dishes. 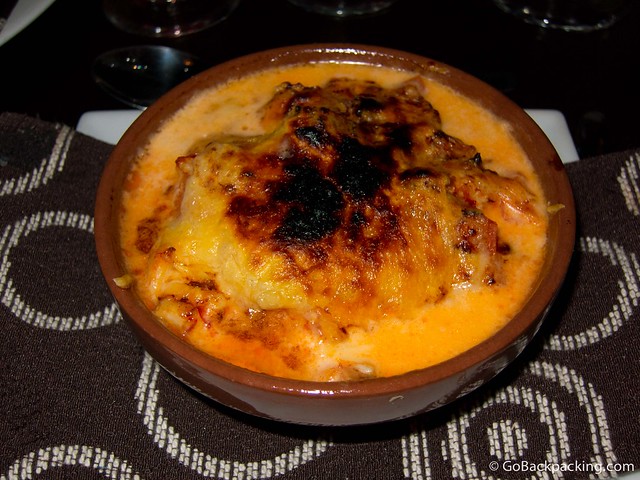 Cost:  115 Argentine Pesos ($26)
Once again King Crab is a specialty at the end of the world, and I wanted to go out in style. It should be noted that everything is more expensive in Ushuaia, given the location and amount of tourism the city sees.

This chowder was very heavy on the crab meat. And heavier in general than the one I'd had in Puerto Natales, probably on account of the cheese.

I overdosed on King Crab, and couldn't finish. Between two great crab dishes, I preferred the one in Puerto Natales.

I would have overdosed eating king crab too. But I would give the other dishes a chance ;0)

Yes, today in Santiago I tried swordfish at the Central Market, but I need to try the king crab chowder again before I leave this country for the 2nd time!

MMMmm! These look so good! So different from the meals that you find in Bs As or even the northern provinces.