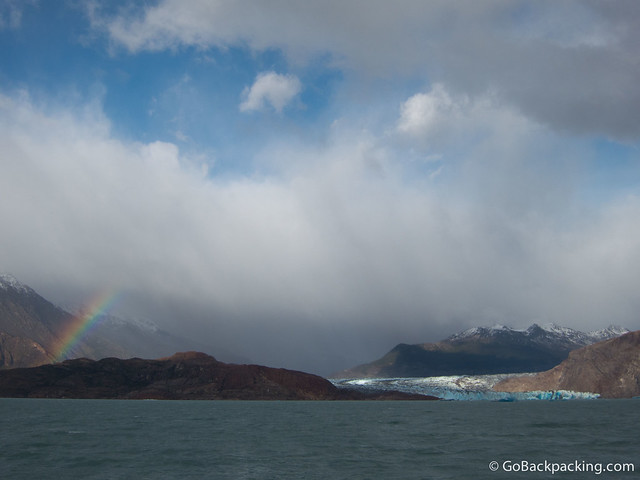 [A]s the ferry approached Viedma Glacier, and the towering columns of deep blue ice came into focus, I felt a pang of anxiety for the first time.

Ice climbing had been a childhood dream of mine.

As an adult, I'd tear out the page of a National Geographic Adventure story about ice climbing on an artificial waterfall in Colorado, hoping one day to be following in the author's icy footsteps.

In New Zealand, I'd pass on the opportunity as there were too many others to choose from.

Two years later, I passed in Switzerland without even researching the costs, assuming that country would be one of the most expensive places in the world to try it.

Another two years later, in Peru's Cordillera Blanca, I'd pass yet again when a local mountain guide told me the ice was “dirty” – covered in soil and rock.

My image of ice climbing in Patagonia, the dream I wanted to fulfill, involved beautiful white walls of ice set against bright blue skies.

Ice axes in hand, crampons attached, I'd scale vertical walls, just like in the movies. I'd been waiting for the perfect experience, however unrealistic it may have been.

By the time I arrived in El Chalten at the start of my G Adventures tour, I was ready to “just do it.” 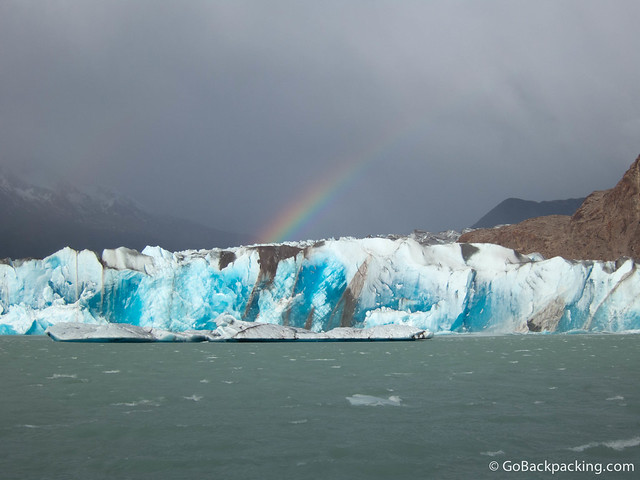 There were no guarantees the weather would be great. In fact, upon questioning the staff of the local company we'd use, they informed us of the potential for rain that day. It was a $140 gamble.

But not a gamble I'd be taking alone. I would be accompanied by 8 of the 9 others in our group.

Only Dennis, an American retiree, would opt for the glacier walk instead. He would later say it was his favorite experience of the trip.

In addition to the water-resistant pants and gloves I'd acquired for the Fitz Roy hike the day before, I also rented thick, ankle-high boots. It's worth the extra few dollars to ensure your crampons will attach to your footwear properly.

Grey skies greeted us on our second morning in Patagonia. I prepared myself for the worst, climbing ice in the cold rain.

It was a short drive from El Chalten to Viedma Lake, where we boarded the one hour ferry to the glacier by the same name.

The Viedma glacier is a stable glacier, and it's actually larger than Perito Moreno, which gets much more attention given how easy it is to view from land.

As we began to approach the glacier, the ferry slowed down for us to view spectacular icebergs drifting in the cold waters.

A rainbow was visible over the glacier, and the clouds slowly but surely began to fade. 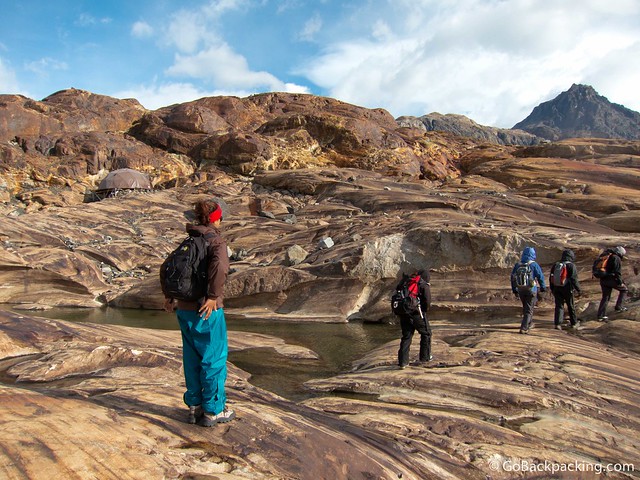 By the time we made landfall, on a quiet inlet to the left of the glacier, the sun was shining.

It was a short walk on slick, rust-colored rock to reach the brown tent where much of the equipment was stored.

We put on climbing harnesses and helmets, and took another short walk to the edge of the glacier.

The four guides, lead by the striking Giselle from Bariloche, helped everyone put on their crampons.

They instructed us how to walk on them, and then we made our way to a halfpipe-like section of the glacier.

Giselle announced we'd be spending much of our time there, and as long as the weather cooperated, we'd have up to 5 hours on the ice. 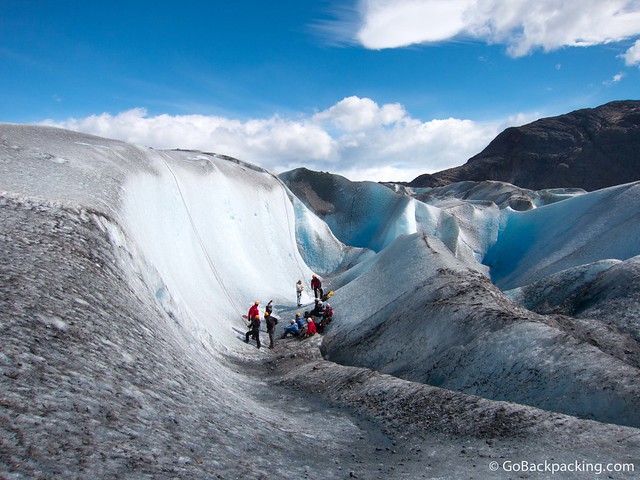 Our ice climbing wall for the day

Once the first rope was fixed, Giselle began to give us instructions for how to climb the near vertical wall of ice before us.

A key point was not to rely on your arm strength to pull you up. If I remember correctly, the same holds true in rock climbing.

Proper technique, and using your legs to lift you up are more important.

I just wanted to get my hands on those ice axes and start plunging them into the wall. 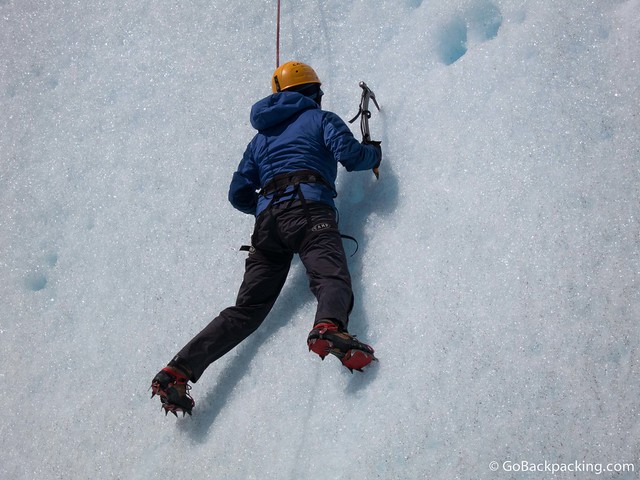 Melissa was the first person to climb

Melissa, a soon-to-be Columbia University graduate, beat me to it. She was already being roped in before Giselle had finished instructing us.

We all watched as Melissa climbed her way up the wall. It didn't look easy, but she was determined to reach the top.

I was feeling excited and inspired. We'd been lead to a beautiful wall of white ice, and blue skies beckoned us up them.

It was turning out to be a picture perfect day, just as I'd always imagined in my mind. 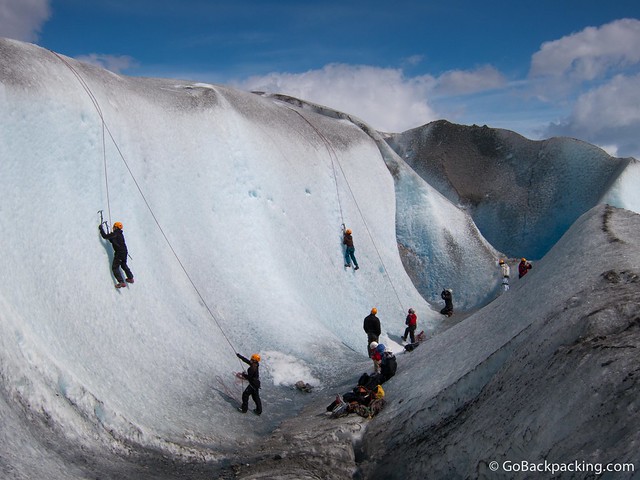 Two routes were set up at any given time. In this picture, I'm climbing to the far left.

My first climb was tentative and slow. I made my way up the wall, but felt clumsy. Adrenaline, if nothing else, brought me to the top.

But if I was going to continue climbing, I had to focus more on proper technique than trying to pull myself up using upper body strength alone.

Early on, I wasn't trusting my crampons to hold me against the wall. I'd kick them in several times to try to get a good hold, but I rarely felt like I got it.

As a result, I'd expend a lot of energy stopping and starting, instead of developing a rhythm which would bring me to the top faster, before my arms gave out on me. 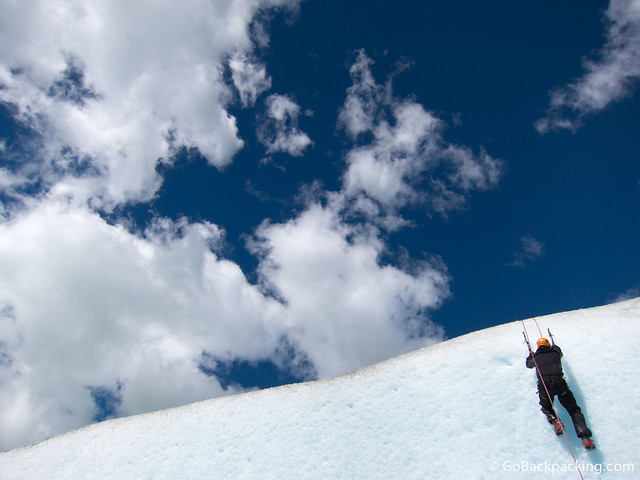 I always felt the tension in the rope. At times I felt it was holding me against the wall more than my ice axes and crampons.

If the rope weren't supporting some of my weight, I'm pretty sure I'd have fallen off the wall quite a few times. Then again most people don't ice climb without rope.

Between climbs, I'd take photos of the others, and the glacier.

As each route was climbed multiple times, and the sun continued to warm the ice, it began to deteriorate.

Our guides did a good job of ensuring everyone got at least one chance on each route, and then they'd set up new ones.

In all, I believe he had the chance to climb four different routes of varying difficulty. 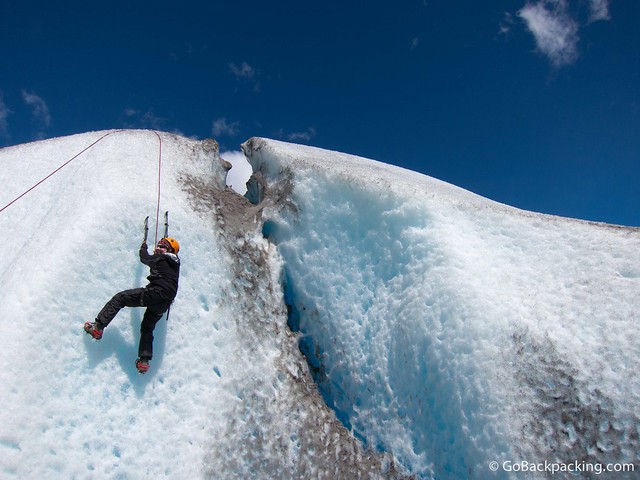 This was the most difficult route of the day, as you had to use good technique to get above the overhang.

The most difficult route of the day involved an overhang. Before any of us attempted to climb it, I doubted it'd be possible.

The photos don't do it justice, but if you've ever tried to climb over an overhang on either rock or in a climbing gym, you know what I'm talking about.

Giselle gave us additional instruction, including a new technique to use for climbing walls like this one.

It'd be my fourth climb of the day. I reached the overhang quickly, but at that point I struggled to get over it.

At one point, my arms burning from trying to hold on, the ice gave way under one of my axes, and I fell backwards.

Once I regained my connection to the wall, I figured I wasn't going to get any higher.

I paused for a photo (seen above).

And a little higher, until I'd gotten them above the overhang, where I claimed the route climbed, and signaled the guide to prepare for my descent. My arms were exhausted.

Descending was the easy part. We'd take the axes out of the ice, and lean back, so our legs and body were perpendicular to the wall.

The guide would slowly release the rope, and we'd walk our way down, Batman style. It's very similar to abseiling waterfalls in canyoning. 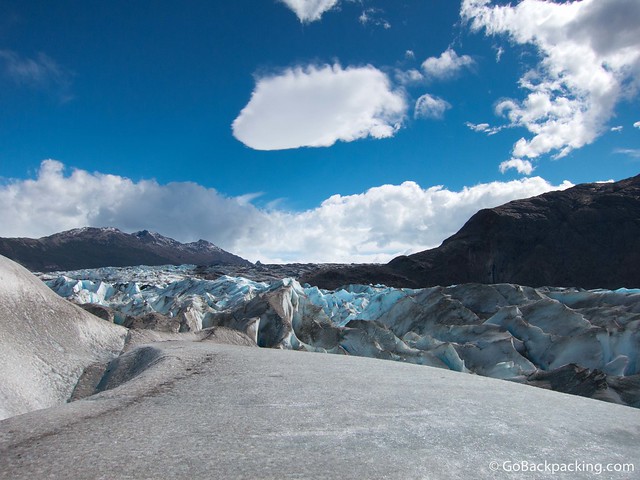 As others took turns climbing that route, I rested, and climbed the other route still set up two more times.

I'd gained a huge amount of confidence in both my equipment, and myself, between the first and sixth (and final) climb.

I was climbing noticeably faster, and it felt more rhythmic. I wanted to keep climbing, but my arms were done for the day.

After everyone got their fill, Giselle lead us around and above the ice wall for further views of the glacier.

We posed for photos, and were then informed of two surprises that still awaited us. 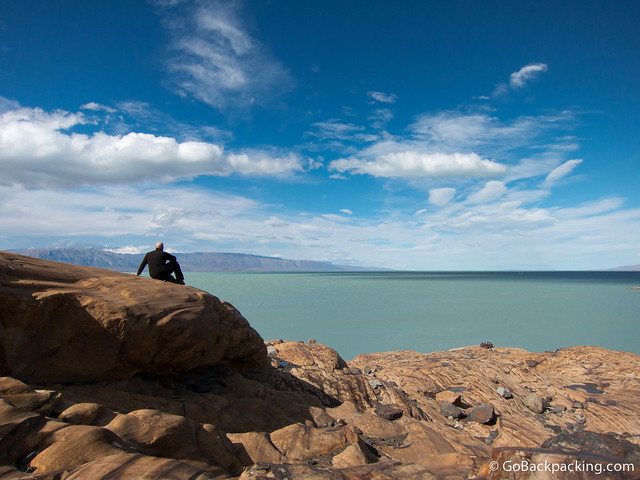 After returning our gear, there was nothing to do but enjoy the views until the ferry returned to pick us up

My question to you is whether I should share the surprise end to our trip publicly here, or keep it a secret, known only to those who have the chance to walk on Viedma in person?

This looks so awesome and I so want to try it out. I'd probably drop a few f...bombs as well, as I am not the strongest or fittest person for that matter, but I think the sense of achievement you must feel afterwards would be worth it.

well i guess thats another thing I'll have to my bucket list! looks freaking awesome! :)

Definitely Chris. And we lucked out with the weather too. Well worth the cost, about $140 plus any clothes or boots you need to rent.

So cool! I love the photos here, reading this already make me excited! I'm a new follower, it's so nice reading your posts, it's my long term plan to go travelling around the world! :'D

Hi Zadia, thanks for reading!

Great photos! I just left Patagonia and can't believe I didn't get around to ice-climbing. There was just so much to do there I ran out of time. Now I regret it even more!! :)

Bummer! There are plenty of places you can do it around the world, so hopefully you'll have another opportunity.

Reveal the surprise or there will be no chocolate pie at Christmas,

And my Mom gets the final word. I'll share the surprises this weekend :)