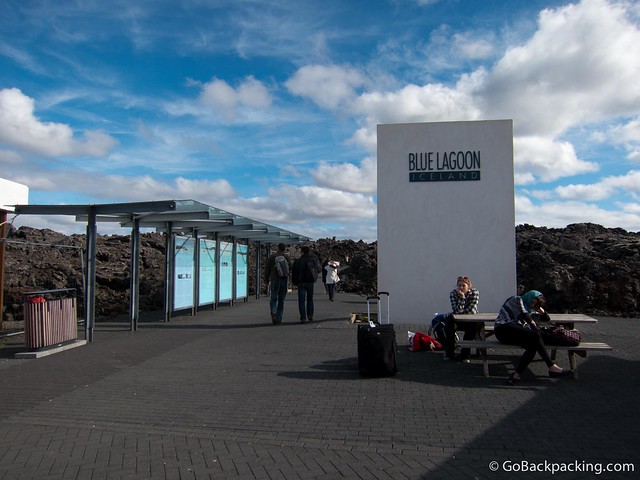 If ever there were a symbol of tourism, it's The Blue Lagoon in Iceland.

When I asked people for sightseeing recommendations in advance of my trip, The Blue Lagoon was always mentioned.

A visit is all but compulsory for every tourist to step off the plane, and I had no plan to be the exception.

The tourism industry in Iceland is so efficient, they've even made it possible to visit the lagoon en route to/from the airport.

This allows you to save money on transportation, though you'll also have to wheel your luggage around (large lockers are available for storage).

Watch the promo video above, and you might get the impression The Blue Lagoon is a relaxing, almost mythical place, with beautiful bikini-clad women drifting through the misty waters.

In reality, the experience is far from a swim in the grotto of the Playboy Mansion.

Upon paying a 35 Euro ($45) entrance fee, you're given a towel and plastic bracelet, which is used to control the lockers and track your food and drink tab.

The men's locker room was clean and well-designed.

There were shower stalls both with and without doors, depending on your tolerance for nudity.

Everyone must wash before entering the lagoon. Soap and shampoo are provided.

According to Adventurous Kate, none of the women's showers have doors (sorry ladies).

Once you leave the locker room, you pass through a small cafe before stepping outside to the lagoon. 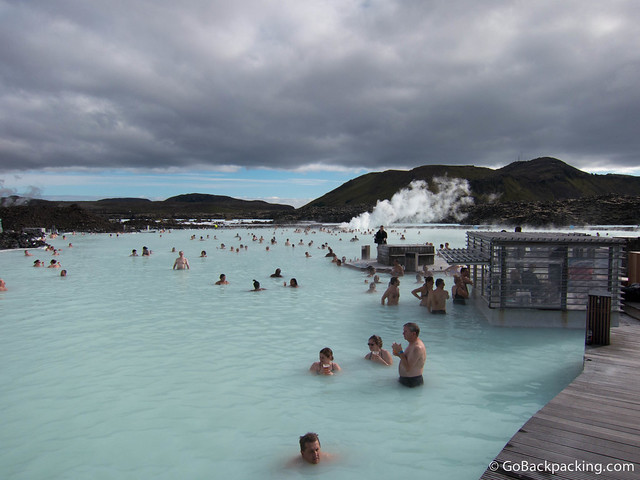 My visit occurred on an early September afternoon. The first thing I noticed was the people; there were tons of them.

It was a diverse crowd, too, with people of all ages, races, and sexual orientations.

There were visitors on their own like me, romantic couples, and tour groups as well.

The second thing I noticed was the water, which is a milky blue, and unlike anything I've seen before.

I hung up my towel on the number coinciding with my locker and stepped into the water.

The temperatures vary, with some areas being hotter than others.

Overall, I found it comfortable, especially given the cooler Autumn air, and lack of sun.

I waded around the lagoon, eventually smearing my face with the silica mud, available from buckets placed around the perimeter. The mud is supposed to act as a natural exfoliant.

It's wet when you first put it on, but after a few minutes, it dries. A few minutes after that, you wash it off with the lagoon water. 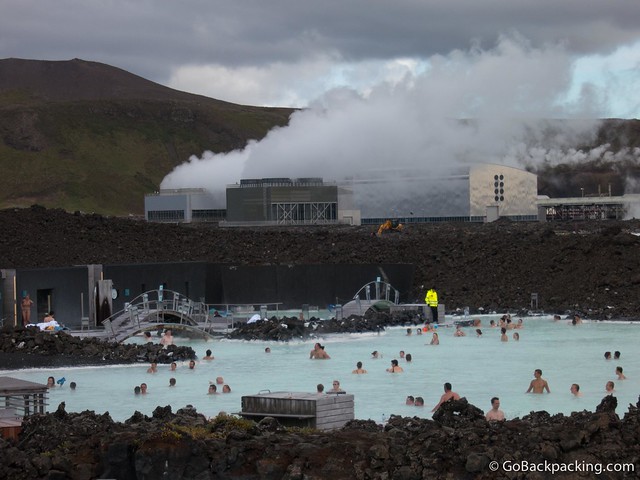 One section of the lagoon (pictured above) is dedicated to in-water massages, which take place on foam rafts or wooden benches.

I don't see how that could be any more relaxing than a massage table in a private room, but there were plenty of people getting them done.

Before going to the lagoon, I'd read that the water is heated not from the ground, but the excess energy from a nearby geothermal power plant.

Judging by the number of people there, nobody cares, but the looming plant does remove any pretense that you're in a naturally occurring, hot water lagoon. 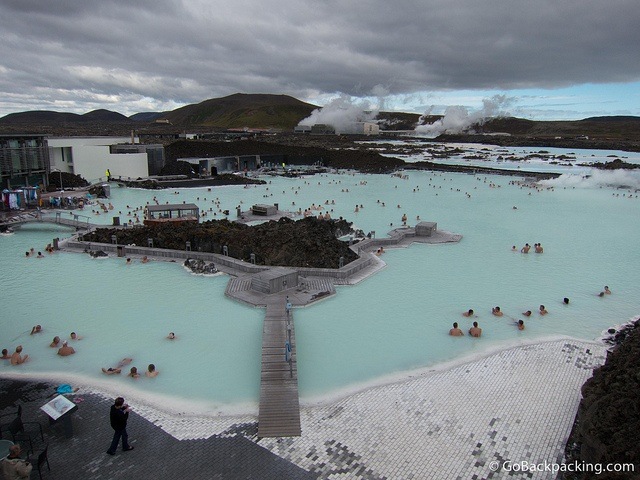 After 20 to 30 minutes in the water, I was feeling a little woozy, so I grabbed a bite to eat in the cafe, along with a free cup of cold Icelandic spring water.

Checking out was as easy as approaching the cashier's counter, and paying my tab.

Before leaving, I highly recommend visiting the observation decks on the second and third floors of the main building.

Doing so gives you the best view of the lagoon and surrounding scenery.

If you want to learn more about hot springs in Iceland, check out this guide by Hekla.com.

Where to Book:  Any hostel or hotel, and most travel companies. Half-day trips to the Blue Lagoon can be combined with other activities, like the Golden Circle. If you're renting a car, you can go on your own. Otherwise, roundtrip transport on a bus costs about $18.

What to Bring:  A bathing suit, sunglasses, flip-flops. Bring waterproof sunscreen if it's sunny, and you plan to spend an extended time in the lagoon.

Is it true that the areas surrounding the Lagoon smell really bad due to too much sulfur in the ground....My brother mentioned he went there many years ago and said there was a really funky egg rotting type of smell?? Looks very beautiful however!!

I went here in February 2004. Didn't freeze my butt off in the water, thankfully. Did the obligatory mud shmearing which was a laugh. Glad I went, particularly after a pretty scary time in an ice cave. I posted about that on my blog. You covered The Blue Lagoon well. Thanks!

Thanks for reading Debra :)

One of my dreams has been shattered. So painful to accept that the pool is heated by a power plant and not by a geyser.

My visit to the Blue Lagoon was pretty disappointing and extremely boring. It felt just like an average pool with nothing more exciting to do than putting those silica masks on... I had a far better time and a far less 'commercial' experience in a natural hot pot in Flókalundur (in the West Fjords).

It is a catch 22. Coming from Australia I hate to miss out on something when we have travelled so far to get to the Country concerned. I think however that I would give this a miss. The price tag is hefty, but the thought of smearing the mud on and washing it off in the water, and all those tons of people doing the same makes me feel icky. Thanks for giving it a go for us.