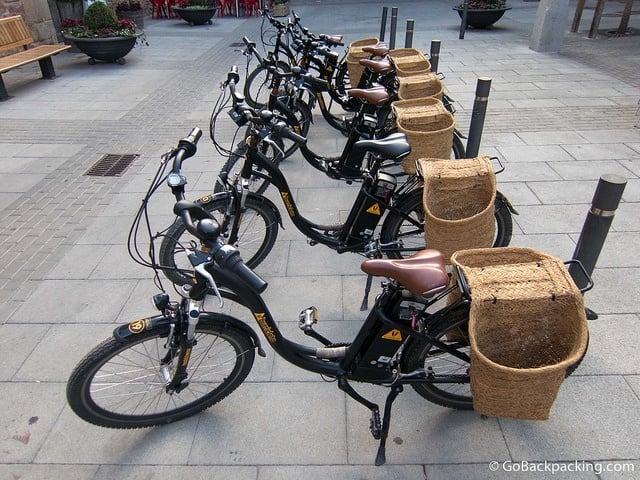 Renting and riding motorized scooters remains on the shortlist of travel experiences I continue to avoid.

I've seen the walking wounded on the islands of Thailand, bandages covering their road rash, or carrying old scars on their legs from touching a hot tailpipe.

So it was with mild anxiety that I approached Burricleta's neatly organized row of electric bikes in the village of Sant Hilari Sacalm, Costa Brava, Spain.

I cased the bikes, wondering if I had the technical know-how to ride them.

And if I did, whether I'd drive myself right off a mountain road, or would be forced off by a cabbage-filled truck, like my dear friend Jodi.

Upon choosing a stylish helmet, our group was given instructions on riding the electric bikes.

As you pedal, turn the right handle forward to speed up, and use the hand brakes to slow down. 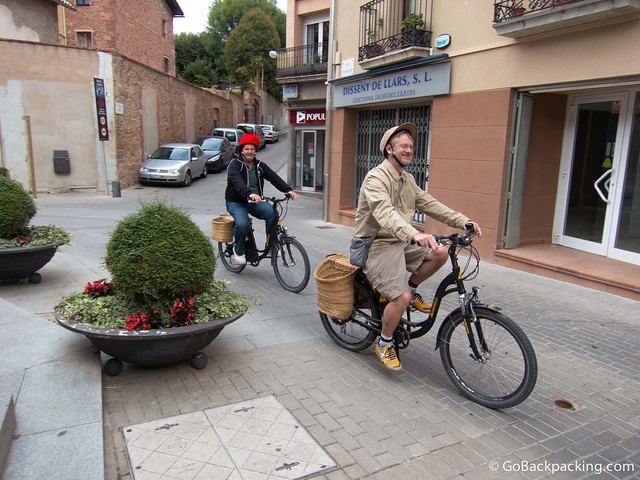 Coming around the bend

I climbed on my chosen bike and took a test lap around the town square.

There was a zip to the bike, thanks to the electric motor, which made pedaling all but unnecessary.

I instantly got the hang of it, and my fears turned to excitement for the ride ahead.

We began by cruising a few of the surrounding streets, stopping by two of the more than 100 antique stone water fountains still in use today.

Then, ahead of the pack, I and another woman veered off onto a forest trail.

The bike handled surprisingly well on the dirt path, which was covered in leaves and pine needles.

Whenever I wanted an extra boost of acceleration, such as on an incline, I simply revvved the right handle grip and zoooooooom!

When we approached a fork in the road, the woman confidently turned down toward the right.

Following the woman ahead of me, who was part of our entourage, I took in the mountain views but started to notice we were all alone.

After about ten minutes, she stopped to answer her phone.

It was another leader of our group, calling to inform us we'd gone the wrong way at the fork in the road. 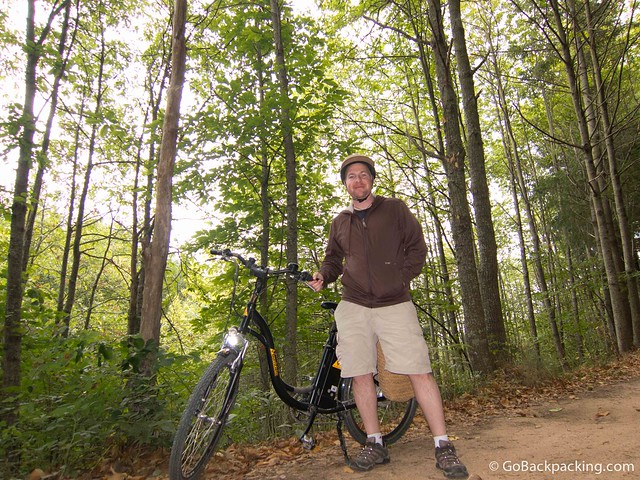 Posing with my ride

Considering the distance we'd covered in just ten minutes, the prospect of riding back would've been draining on a regular bike.

There were a lot of ups and downs, but on the electric bike, the extended ride had little impact on my energy level and respiration rate.

Riding an electric bike almost felt like cheating, at least if you're more focused on physical fitness than a leisurely ride through the forests of Costa Brava.

Upon returning to the fork in the road, we veered left, and within a few minutes, were reunited with the rest of the group.

Points of Departure: Check the Burricleta website for the various departure points in Catalonia.

Time Required: 1.5 to 3 hours for the region we covered around Sant Hilari Sacalm. Multi-day trips are also available.

My electric bike ride was organized in conjunction with a blog trip hosted by the Costa Brava Tourism Board.

Ha! It definitely is cheating :-) But then again, i'd probably not have the stamina to go for too long on such trips... it is a good idea, either way.

Aww, great memories :) I am happy we all survived this burricleta ride!

I think it'd be fun to take one of those bikes for a few days and ride from town to town :)