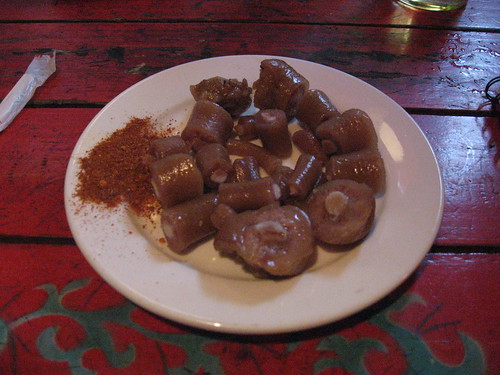 I walked down Jinli Lu, which was lined with souvenir and tea shops, restaurants and bars.

Despite the tourist trap feel of the new construction and design, the street's history dated back to the Han Dynasty.

I came across Carol's Restaurant “where East meets West” and grabbed a seat facing the street through an open window.

My stomach wanted a cheeseburger, so I made a compromise with myself by ordering a few Chinese treats to go with it.

The pig's tail arrived as an appetizer, and looked just like a damn pig's tail!

There is no getting around the fact that when you order these exotic items, little is done to dress them up.

A small pile of crushed red peppers accompanied them. I picked up my chopsticks and went to town.

The meaty part of the tail was tender and juicy. It soon became a fun process to manage the meat off the cartilage in the center, which you spit out.

Dipping the tail in the red pepper took the dish to the next level, adding the ubiquitous Sichuan spice and flavor to the experience.

At one point I looked up to see two Chinese girls across the street in front of another restaurant giggling at my culinary adventures. I waved to ensure they knew I saw them. 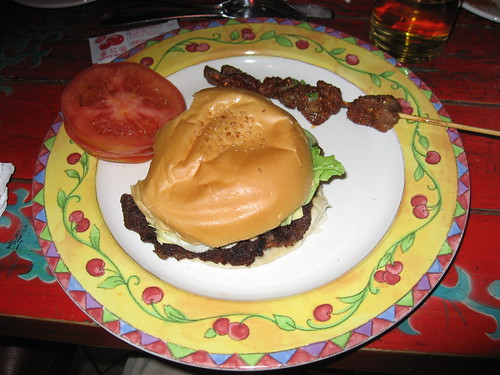 My burger (always well done) arrived with a skewer of barbecued chicken gizzards.

They looked harmless enough in the low light, and my success with the pig's tail emboldened me (as did the Carlsberg I drank).

After a few bites of burger, I gnawed off a gizzard. It was tough and almost leathery, with a beef-like taste (though distinctly not as tasty as beef).

I didn't like the texture at all, so the other two pieces were left to waste.