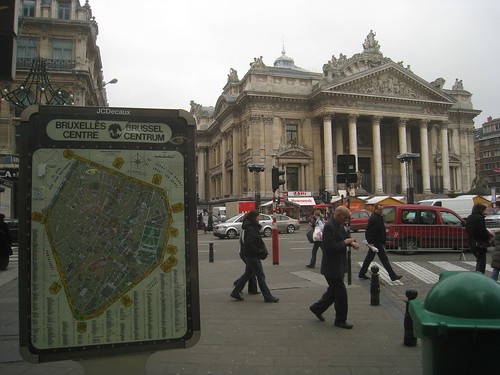 The Van Gogh hostel is about 15-20 minutes from the city center, but I took my time walking there.

Lots of people were out and about, shopping for last minute gifts as they do in the United States. I ducked into a glitzy mall for warmth and exploration.

Of course everything seemed too expensive, with the Euro having gained back most of its previous value against the dollar (roughly 1.40 USD to 1 Euro).

I tasted a complimentary coffee, bought my first selection of Belgian chocolates, and continued onward down a long street flanked by shops. 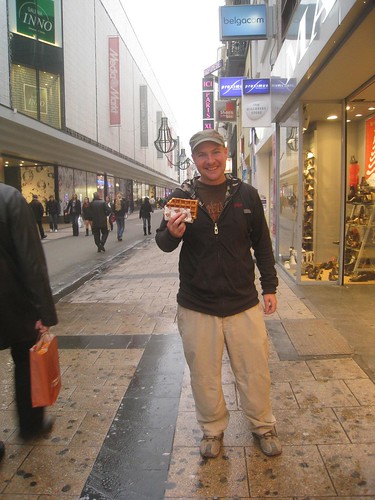 I spotted my first waffle joint and ticked off another Belgian delicacy. The sweet, warm, waffle was a real treat given the winter weather.

Further along, I began to visit clothing shops in search of an inexpensive beanie and scarf. Neither were as cheap as I wanted, but they were both a necessity.

Everyone was so stylishly dressed in big fluffy scarves, leather jackets, boots, and jeans. I felt like a freezing mess.

I longed for a nice pair of warm jeans, but resisted the urge to drop $45 so easily.

The North Face pants I've used this long are great for warmer climates, but far too loose and breezy for the European winter. 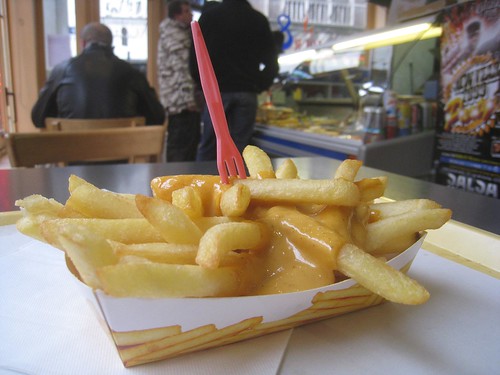 As I approached the main square, I ran into the Christmas market, with small temporary shops selling everything from foie gras to Greek soap made from olive oil.

I stopped for a cappuccino and grilled ham/cheese sandwich.

Along with a pack of gum, it set me back $10. I began to wonder whether I was being too optimistic when I gave myself 26 days in Europe, 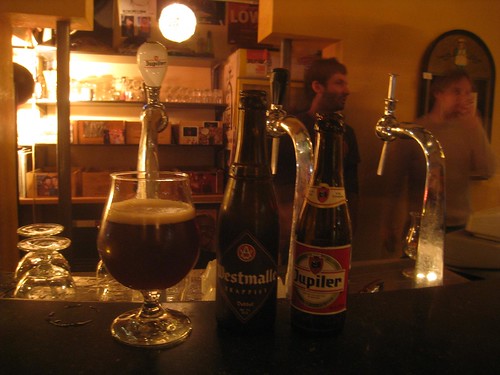 I also stopped for the famous Belgian fries, which I took with the “Brazil” sauce. Delicious.

And everyone in the streets, a mix of tourists and Belgians, were enjoying the same local treats and atmosphere.

Returning to the hostel, I moved into my 4-bed mixed dorm which I had to myself for the night, showered, and stopped down at the bar where I soon met Matt (army guy from Wisconsin), Steve (Aussie), Tyler and Dan (students from San Diego), and later Pollyanna and Vanessa (Brazil, living in Dublin).

We began to sample the fine, strong, Belgian beers. On the low end of the spectrum, beers like Jupiter and Stella Artois were about 5% alcohol, while those crazy trappist monks brewed 7% and 9% beers.

By comparison, I believe American Budweiser is 3%. 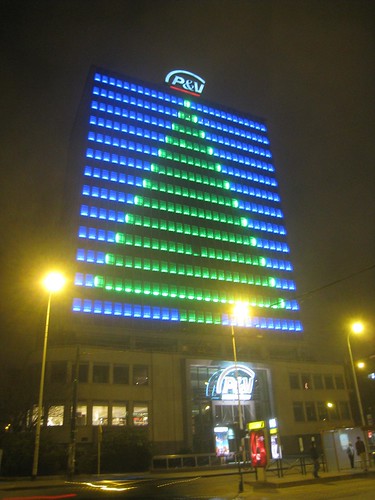 We stopped in the first bar we found, Celtica, which was packed as I imagine most Irish pubs the world over are on Christmas Eve.

Beer-drinking continued. I started with a pint of Guinness for $6, and then realizing with a happy hour running from 1 pm to midnight every day, Stella Artois was a far better deal at $1.50.

Far too much beer later, Tyler, Steve and I split off and tried to find another bar but they seemed to be closing up.

Back at the hostel, I played some overpriced ($1.40/game) pool with Steve and crashed around 3 am.

Hello I?m so delighted I identified your web site, I basically found out you by mistake, while I had been looking for on Yahoo for one point else, Anyways I?m right here now and would just desire to say thanks for any good publish and also a all round entertaining blog (I also get pleasure from the theme/design), I really do not have time to go by means of it all in the moment but I?ve bookmarked it and also extra your RSS feeds, so when I have time I is going to be rear to look at a lot more, Please do keep up the fantastic work

Ahh everything looks so tasty!

Ahh everything looks so tasty!