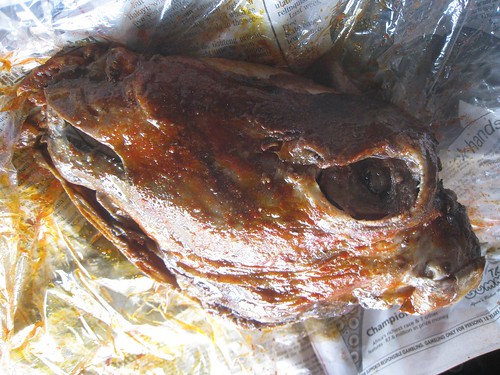 ” Skop. Head of a cow, sheep or goat. The head is first scrubbed with a sharp instrument like a razor to remove skin and unwanted parts like ears and the nose are then cut out. The head is then boiled and allowed to simmer. Favored by African men.”? 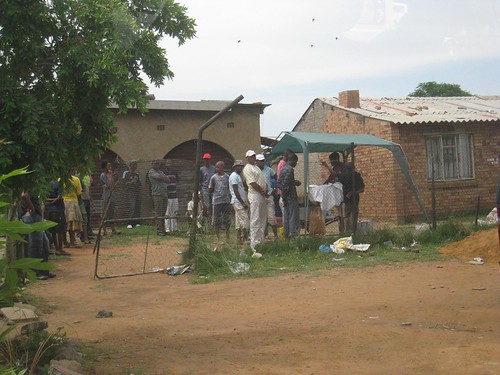 At first, I wondered how on Earth I could track down sheep's head. It sounded like an old tribal meal.

I learned they were still popular amongst the urban poor after reading Steven Otter's “Khayelitsha, An Umlungu In A Township.”

Nicknamed smiley because of the grin which develops on the sheep's head as the hair is burned off it over a fire, I knew my Soweto tour would be the one and only chance to get one. 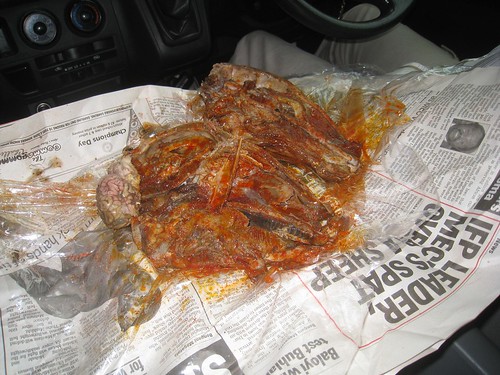 Luckily, the guide was all too happy to make an unscheduled stop.

It was Sunday morning, and the queue was at least 20 minutes. At $2 a head, they were half the price of a McDonald's meal.

The guide gave my money to someone further ahead in the line so we wouldn't have to hold up the tour too long, and brought the head, wrapped in plastic and newspaper, back to the van.

Before we entered the Hector Pierson museum (a young boy whose untimely death at a peaceful march sparked major momentum against apartheid), the smiley was unwrapped over the van's center console. 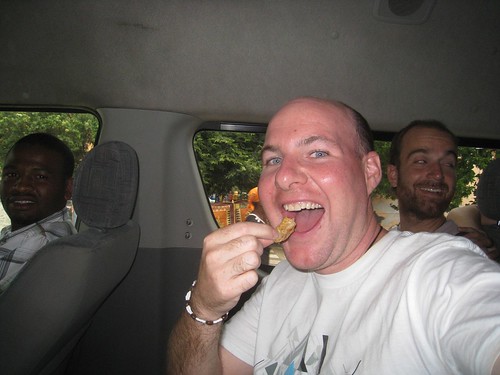 The guide began to show us (me and a horrified Spanish couple) how to take the head apart.

It was already split in half down the middle, but apparently there was a special way to pop the pupil out of the eye before eating the latter.

I couldn't stomach an eye, but I did try the tongue which tasted like chicken, and a bit of the brain, which was mushy, and tasted just as bland as the pig's brain I sampled in China.

Two brains to my credit, I no longer felt the need to eat them going forward.

The flavor is bland, so it is more the texture I find unappetizingly gross. 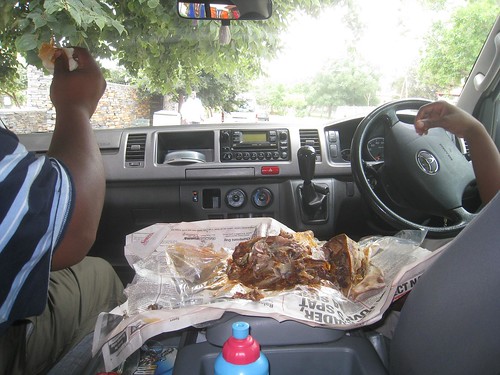 To our surprise, the Spanish couple offered a little of their own traditional food.

From a bag, they produced thin slices of raw pig's leg on buns. A stopover in Spain suddenly seemed more appetizing!

Pretty nice post. I just stumbled upon your blog and wanted to say that I have really enjoyed browsing your blog posts. In any case I'll be subscribing to your feed and I hope you write again soon!

I can see that you might be an expert at your field! I am launching a website soon, and your info will be really useful for me.! Many thanks for all your help and wishing you all the success in your business.

Wow...very impressive you world traveler you! Even more impressive is the headline of the article in the newspaper that they served the smiley. It says something about an IEC leaeder's spat over sheep! LOL :mrgreen:

Wow...very impressive you world traveler you! Even more impressive is the headline of the article in the newspaper that they served the smiley. It says something about an IEC leaeder's spat over sheep! LOL :mrgreen: