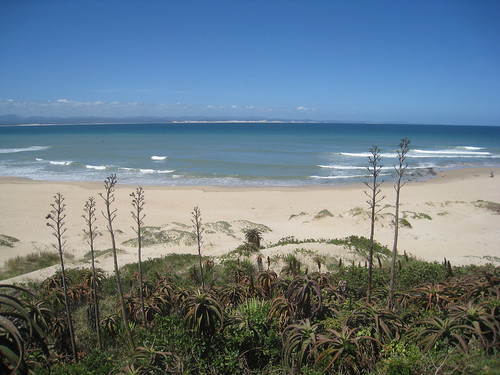 John recruited me for an overnight trip to Addo Elephant National Park for a few reasons. First, he offered to drop me off in Port Elizabeth afterwards, meaning I could take a break from using the Baz bus. Second, he promised a good experience by getting to the park early, when the gates opened. Third, he had worked as a guide in Kruger Park, and I could tell from the way he spoke enthusiastically about the trip, he'd be a good guide. And fourth, of least importance to a guy like me, was the fact that the three others who had signed up were girls.

I met Yvonne from Switzerland at dinner my first night, so we had already gotten to know each other a bit. She was volunteering at a local school. I met Karin and Stefanie (also Swiss-German) briefly beforehand as well. They were both in the English language school run by Island Vibe.

We left Jeffrey's Bay with braai supplies and plenty of wine. It was the most beautiful day of my time there. Low winds, bright blue skies, and lots of sunshine. The water looked as picturesque as any I'd seen in Thailand (ok, almost any view because Koh Tao had some amazing beaches). The drive to Orange Backpackers, situated 8km outside the park, was a pleasantly short two hours. Along the way, I got to know Karin and Stefanie a little better. 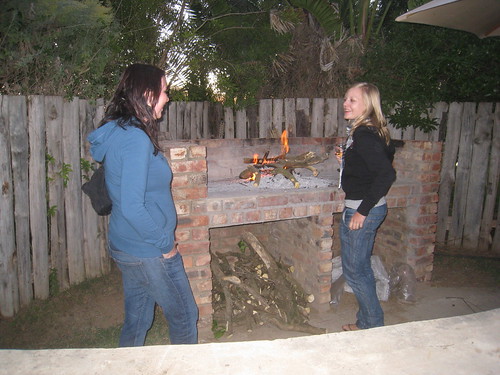 Once we settled into our basic 4-bed dorm for the night, opposite a paintball field, we uncorked the fine South African wines and hung out while the locals watched rugby in the bar. As the sun dropped, so too did the temperatures and we huddled around the fire burning for our braai. It took awhile, but John soon had heaps of sausage and pork chops coming off the grill. We retired around 10pm, knowing John would come knocking at 6am.